At the beginning of the month, Michigan Governor Gretchen Whitmer announced three major bridge repair projects starting in July as part of the state’s “Rebuilding Our Bridges” program. The bridges include Dennis Road at Doan Creek in Ingham County; Palms Road at Belle River in St. Clair County; and 26 Mile Road at North Branch Clinton River in Macomb County.

“Together, we are moving dirt to fix roads and bridges across Michigan to keep drivers safe and save them time and money,” said Governor Whitmer. “Since I took office through the end of this year, Michigan has fixed over 16,000 lane miles of road and 1,200 bridges, supporting nearly 89,000 jobs. Now, as construction season kicks into high gear, we have completed six bridge projects, with the latest completed two weeks ahead of schedule.

“We are setting up orange cones at record pace as we make the largest investment in state roads and bridges in Michigan's history thanks to the bipartisan Building Michigan Together Plan and my Rebuilding Our Bridges program. Let's keep fixing our roads with the right mix and materials, so they stay fixed, and support good-paying jobs along the way to power our economy to new highs.”

The Dennis Road and Palms Road bridges were scheduled to begin on July 5, with the 26 Mile Road bridge beginning July 25.

The Michigan Department of Transportation’s Rebuilding Our Bridges pilot program is the first of its kind in the state. The program plans to repair 19 bridges owned by local agencies in serious or critical condition, including superstructure replacement and full removal and replacement of the bridge deck and supporting beams. 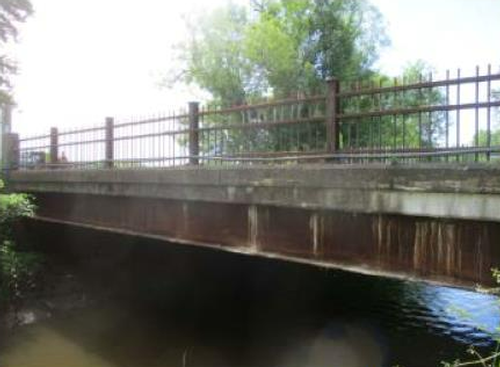 MDOT
At the beginning of the month, Michigan Governor Gretchen Whitmer announced three major bridge repair projects starting in July as part of the state’s “Rebuilding Our Bridges” program.

MDOT notes that it expects bridge bundling, which covers several bridge locations under one contract, to streamline coordination and permitting, increase economies of scale, and improve bridge conditions on local routes around the state.

“The bridge bundling program was a great resource for the road commission as it strives for a sustainable balance of bridge replacement, improvements and preventive maintenance to limit the number of bridges that slip into poor, serious or critical condition,” said Adam Newton, project engineer for the Macomb County Department of Roads (MCDR).

“Having a few of the bridge superstructures that are in critical condition replaced within the bridge bundle pilot project has given the MCDR an opportunity to focus on implementing a mix of fixes for the remainder of our bridge inventory with traditional resources and funding.”

The program features an online dashboard that provides project updates, shows percent completion, detour routes and other information for each of these projects. Currently, six of the 19 pilot bundle bridges are completed, marking almost the halfway point. The four remaining bridges to be rebuilt this year are anticipated to start in August.

According to the announcement, $196 million in federal COVID relief funds appropriated by Governor Whitmer and the legislature will help to execute Phase II of the bridge bundling program, beginning later this year, to fix 59 more bridges. Phase II bridges will be prioritized by regional mobility and safety, with some being permanently removed and others being fully replaced.

A full list of Phase II bridges can be found here.

According to the directive, the Michigan Infrastructure Office will convene interested departments to create a coordinated permitting plan for the review of applications for state permits once a covered project is identified. Departments will then create a publicly available permitting schedule, allocate roles and responsibilities and establish a plan for public outreach.

Additionally, departments and agencies will review their own and other permitting schedules to identify any areas in which they can avoid duplication, streamline processes and share information to expedite the review of permits.

“We're going to continue to work incredibly hard to make sure that we move forward the two most crucial elements in any construction project: dirt and paperwork,” Whitmer said at a press conference on June 1. “We're going to move fast.”

Whitmer said permitting improvements will be made “without short-changing any environmental protection or diminishing our important safety standards.” Whitmer also anticipates that this summer will be the busiest yet for projects due to new appropriations.

The Department of Transportation reports that Michigan is expected to receive $7.8 billion over five years in federal formula funding for highways and bridges, $169 million to reduce transportation emissions and $192 million to increase the resilience of transportation systems. It will also be able to compete for $12.5 billion for “economically significant bridges,” $15 billion for megaprojects and other federal grant programs.

In January, President Joe Biden announced the new program launched by the DOT targeting the replacement and repair of the nation’s bridges as part of the bipartisan infrastructure law.

The Bridge Replacement, Rehabilitation, Preservation, Protection, and Construction Program (Bridge Formula Program) will be administered by the Federal Highway Administration (FWHA) and represents the largest bridge investment since the construction of the interstate highway system.

According to 2021 data from the National Bridge Inventory, more than 43,000 bridges in the country are in poor condition.

“This is an investment that is going to help connect entire towns and regions to new opportunities,” Biden said at the time. “With this investment we're sending a message to those communities and to the people who call them home: You matter. We're building back and building back better with you. We're making sure you're not left behind or left out.”

USDOT expects for the Bridge Formula Program to help repair approximately 15,000 highway bridges, as well as dedicate funding for Tribal transportation facility bridges and “off-system” bridges, or locally-owned facilities not on the federal-aid highway system.

As an incentive for off-system bridges owned by a county, city, town or other local agency, the new guidance notes that federal funds can be used for 100% of the cost of repairing or rehabilitating the structures. Typically, states must match federal funding with up to 20% state or local funding.

“The Biden-Harris Administration is thrilled to launch this program to fix thousands of bridges across the country—the single largest dedicated bridge investment since the construction of the Interstate highway system,” said U.S. Secretary of Transportation, Pete Buttigieg. “Modernizing America’s bridges will help improve safety, support economic growth and make people’s lives better in every part of the country—across rural, suburban, urban and tribal communities.”

“This record amount of funding, made possible by the Bipartisan Infrastructure Law, will allow states and Tribal governments to fix the bridges most in need of repair,” added Deputy Federal Highway Administrator, Stephanie Pollack. “It will also modernize bridges to withstand the effects of climate change and to make them safer for all users, including cyclists and pedestrians.

“Every state has bridges in poor condition and in need of repair, including bridges with weight restrictions that may force lengthy detours for travelers, school buses, first responders or trucks carrying freight.”

Funds are being allocated to states based on need, with states responsible for deciding what bridge projects get funded. According to reports, the administration is encouraging states to use funds to repair existing bridges when possible, but if they choose to build new bridges, they should prioritize equity and address barriers to opportunity and challenges experienced by underserved communities.

A full map of bridges in poor condition and funding provided by state can be found here.