An engineer from West Virginia University has begun research to develop high-entropy coatings to protect gas turbine blades from heat and corrosion from hydrogen combustion. Xingbo Liu, a professor in the Department of Mechanical and Aerospace Engineering, hopes that these new coatings can be used in large-scale power generation.

Most of the funding for the project comes from a $2 million Department of Energy grant to decarbonize U.S. power and industrial sectors, advance clean energy manufacturing and improve the country’s economic competitiveness.

“There are several ways to turn a turbine and generate power,” said Liu, also associate dean for research and endowed chair of engineering at the Benjamin M. Statler College of Engineering and Mineral Resources.

“All the most popular ways today use heat. Today, in about two-thirds of turbines, we burn coal or we burn natural gas to turn a turbine, with coal contributing about 20% and natural gas about 40% of the total power we generate in the U.S. Less often, we use a nuclear reaction to heat water and generate steam.”

Nuclear energy is the most common source of electricity, Liu added, with hydropower, wind and solar power following. His team is looking at using a blend of both hydrogen and natural gas as fuel. 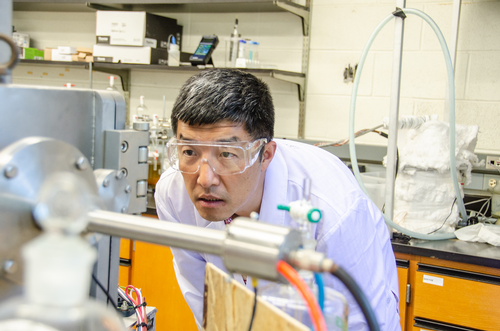 “The principle of a turbine that runs on hydrogen is the same as a turbine powered by natural gas, but with hydrogen the combustion characteristics are different from gas,” Liu said. “Hydrogen combustion has two unique characteristics. One is that the reaction produced is pure steam, which can be very corrosive. The other is the temperature. Combustion is really hot and combustion temperatures are sometimes even higher than the melting point of the metal component.”

Because of this, Liu is focusing his research on creating coatings for the blades to keep them from corroding, oxidizing or melting when hydrogen fuel is added to natural gas.

“People use coatings all the time as simple as nonstick cookware or coatings on eyeglass lenses,” Liu said. “In the case of turbines, there have been two different kinds of coatings. One is called the environmental barrier coating, where you protect your component from the corrosive environment.

His study, “High-Entropy Alloy-based Coating to protect Critical Components in Hydrogen Turbine Power System,” looks at coatings that are made from a mix of different elements.

“Typically, the materials we are using today have one major element, such as copper or aluminum,” Liu said. “It's not pure aluminum, it's an aluminum alloy, but the majority of the alloy is aluminum.

“With a high-entropy alloy, we don't have one major element, it's a bunch of things together, and each one of them has a similar composition. It's basically a stew, and that gives us some unique properties that we think have hope for this application.”

According to the university, much of the research will happen at WVU’s Statler College. However, they also will collaborate through partnerships with the National Energy Technology Laboratory and Praxair Surface Technologies, a subsidiary of Linde, the world's largest industrial gas company.

The team hopes to engineer a coating that will successfully protect the wind turbine blades, allowing power plants to be one step closer to running on the mix of hydrogen and natural gas. Overall, this would reduce their carbon emissions and increase demand for natural gas as an energy-producing fuel source.

Liu notes that currently the blending process for hydrogen and natural gas is “still at the research and development stage. Although there have been demonstrations of hydrogen-fueled turbines, no one has run a turbine with hydrogen commercially.”

“There's currently an experimental plane that can run on hydrogen,” he added. “Google 'hydrogen plane' and you can watch the video. Of course, that's just a demonstration, and it's not something you can use today. But that's what research is about, right? You try something new, try new ideas and though some of them will fail, some are going to become useful.”

Because wear and corrosion can cause damage over a range of surface temperatures, researchers note there is a need to protect the component surface with a suitable material for enhanced economic viability. For example, coating the surface of a turbine blade can increase service life and thus hours of operation.

To address this, the scientists synthesized the iron-based intermetallic powders and utilized the same for depositing the coatings using detonation spray coating technique. The International Advanced Research Center for Powder Metallurgy & New Materials reportedly developed gas atomized iron aluminide powder and deposited it on mild steel substrates with this method without any cracks or spalling.

Results showed that the coatings exhibited better corrosion resistance when chromium and aluminide are in a solid solution with iron than in the iron-rich phases. They also demonstrated increased wear resistance by 30% to 40% than mild steel.

These results imply that iron-aluminide coatings can be used for high-temperature erosion resistance applications, such as in thermal power plant turbine blades, aerospace engine blades, landing gear shafts or steel rolls in the paper industry.