Last week, the U.S. Army Corps of Engineers announced that it has awarded the $1.068 billion contract to construct the new lock for the Soo in Michigan, which is expected to begin this summer. The contract was awarded to Kokosing Alberici Traylor, LLC, a joint venture from Westerville, Ohio.

For Phase 3, which is the largest phase of the project, the contractor will build the new lock chamber and rehabilitate the downstream approach walls. The work is expected to take seven years to complete.

Additionally, the Army Corps notes that with continued funding, the remaining work may be awarded over the next three years. This is valued at $803.95 million.

A major cost increase reportedly led to a five-month contract award delay while the Army Corps developed reports to deliver a new cost estimate for reauthorization to Congress. According to the release, the cost increase root causes are changing market conditions, inflation, a nationwide labor shortage, design modifications and early estimate assumptions. 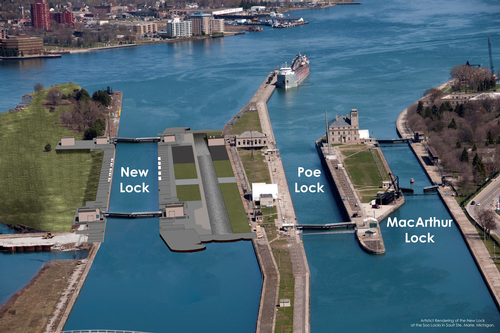 “We recognize funding a larger amount for the New Lock at the Soo is a challenge that could potentially result in schedule impacts,” said Deputy District Engineer Kevin McDaniels. “The Corps of Engineers is partnering with industry and federal agencies to find collaborative solutions aimed at addressing the cost impacts to Corps of Engineers programs and projects nationwide.”

Phase 1 is reportedly nearly complete, with “punch-list” items and final cleanup remaining, and Phase 2 scheduled for completion in summer 2024.

At the end of May, new estimates for the project were released, revealing the project could cost double or triple the original estimated cost. Lawmakers say that the increase is due to inflation, labor costs and supply chain issues.

At the time, the Army Corps was still working on an updated cost estimate but have briefed members of the Michigan delegation. A final figure could reportedly come in as high as $3 billion, which is more than triple the initially authorized $922 million for the project in 2018.

Michigan Senator Debbie Stabenow expressed “deep frustration” over the new costs, noting that last year she worked to “lock down” the rest of the funding needed to complete the projected from the bipartisan infrastructure law and other spending.

“In fact, by getting the money up front, the Army Corps told me that they could save money and cut about two years off the construction time,” Stabenow said.

“Now, because again, it's all related to supply-chain issues and all the other associated costs, labor issues, now it's going the other direction. Hopefully, the supply chain issues get fixed here sooner rather than later, and we'll begin to be able to see some ways to cut costs.”

Currently, measures to aid the project could potentially be covered in the Water Resources Development Act that will be voted on by lawmakers this summer. This could enable construction to continue under the existing authorization through fiscal year 2025, providing some flexibility for the project.

“The last thing we want is to have to come back later down the road and have to reauthorize again, so that's why we're looking at the flexibility here to be able to keep the construction going,” Stabenow said.

In February 2020, the Corps announced that Trade West Construction Inc. would begin deepening the upstream approach channel in the spring. At the beginning of May, dredging equipment started to arrive for the first phase of the project.

In June, President Joe Biden’s 2022 federal budget plan proposed $480 million in federal funding for the construction of Michigan’s Soo Locks. The funding was a large chunk of the $595 million Biden has proposed for projects within the Army Corps of Engineers, Detroit District.

At the same time it was noted that the Soo Locks project had acquired roughly 25% ($241.6 million) of funding for the project’s development. If approved, however, Biden’s proposal of $480 million for the project would increase the percentage of acquired funds to 78% or $721.6 million of the $922 million project total.

Although Biden’s proposal outlined $595 million for projects within the Army Corps of Engineers, Detroit District, for high water studies and monitoring, beach nourishment, harbor dredging and flood risk management, among others, the budget also included $6.793 billion in discretionary funding for the U.S. Army Corps of Engineers Civil Works Program overall.

In November, officials announced that the project was on track to reach completion by 2030. A news conference was held at the National Museum of Great Lakes in Toledo, Ohio to update on the lock system’s progress, with port authority leaders from Toledo Monroe, the Detroit District Army Corps office and the head of the steamship company that uses the locks.

“Having a new Soo Lock that has the same dimensions of the Poe and able to accommodate those largest freighters on the lakes will give us a great deal of resiliency and the ability to increase the time periods in which we do necessary repairs or maintenance or rehabilitation throughout the year,” said Lt. Col. Scott Katalenich, commander of the Army Corps of Engineers’ Detroit District at the conference.

According to Katalenich, the project consists of three phases:

“But we are optimistic that with good weather, we may be able to beat that,” Katalenich said.

The new Soo Lock will reportedly be 1,200 feet long and 110 feet wide, with the creation of 1,200 jobs annually. Port authority leaders from Toledo and Monroe at the event also stressed the importance of the project in regards to the ongoing supply chain disruption.

At the beginning of the year, it was announced that the nearly $1.5 billion project had been fully funded thanks to additional funding from the bipartisan infrastructure bill, using $479 million of the U.S. Army Corps of Engineers’ $561 million received funds for the fiscal year in Michigan and on the Great Lakes.

According to the release, this funding could also put the project ahead of schedule by as much as two years and is one of the largest amounts ever budgeted for a single Army Corps construction project in one year. The new lock is currently in Phase 2, with the Phase 3 construction of the lock chamber expected to be awarded in spring 2022.

At the time, the Soo Lock was closed until late March for critical maintenance and due to the federally regulated operating season. The winter period is used to perform upkeep, such as inspections, structural repair and seal replacement, concrete repairs, dewatering system maintenance and floating plant maintenance.

According to the Army Corps, the second year of upstream channel deepening for the new lock completed in mid-December, excavating about 150,000 cubic yards of Jacobsville sandstone to deepen the north canal enough for the 1,000-foot ships that will use it. This deepening work will resume in the spring.