PPG to Complete Over 25 School Makeovers in July

Last week, global coatings manufacturer PPG announced that it was planning to complete over 25 school makeovers through its New Paint for a New Start initiative.

“As students and teachers embrace in-person learning after the challenges presented by the COVID-19 pandemic over the last two years, we have identified educational spaces in need of a bright and beautiful refresh, and empowered our employees to carry out those projects.”

Reported to be a part of the company’s Colorful Communities program, the schools will be painted throughout the month of July by PPG employees across every region. According to PPG’s press release, more than 1,000 employees and volunteers will dedicate their time to transforming classroom environments to serve local students using PPG paint products and expertise.

Each project aims to create engaging spaces for students to learn and grow. The most transformative projects are slated to use a single global color palette selected by PPG color experts. 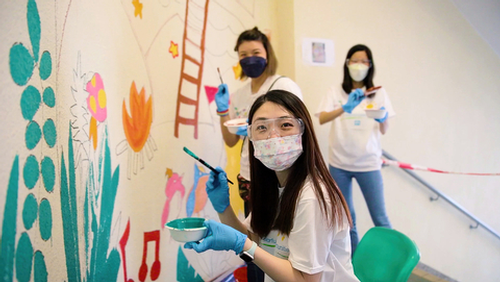 PPG
Last week, global coatings manufacturer PPG announced that it was planning to complete over 25 school makeovers through its New Paint for a New Start initiative.

“PPG understands that color can enhance learning and create spaces where students feel comfortable and encouraged,” said Kiersten Lent, PPG Color and Design Manager, Architectural Coatings. “We carefully selected colors that pair with the learning objectives for each classroom while considering factors that include students’ ages and local, cultural influences.

“The palette includes Olive Sprig, which is the 2022 PPG Color of the Year, or regional colors inspired by it to create a soft, flexible basis for any educational environment.”

“We know that many students around the world face educational inequities. When we see outdated classrooms in disrepair, we see our role in creating inspiring spaces that are equipped with the right resources so every student can learn and thrive.”

Since 2015, PPG has completed more than 386 Colorful Communities projects, impacting more than 7.4 million people in 42 countries. In 2021, PPG invested $13.3 million to support hundreds of organizations across more than 40 countries.

Throughout 2021, PaintSquare Daily News covered several of PPG’s Colorful Communities projects. In May, it was reported that PPG had completed a program project at Yuhong Primary School in the Jiading District of Shanghai, China.

The Yuhong Primary School educates more than 170 students with a staff of 10 teachers. According to PPG, the school’s beautification is a step create a colorful and engaging environment for the children.

According to PPG, the event brought together 30 volunteers from the PPG Jiading plant, who spent more than 70 hours working on the school’s walls. The company provided more than $45,000 to assist with the project, including 195 gallons of Seigneurie exterior paint by PPG. (The company also donated books, teaching aids and COVID-19 control and prevention supplies.)

Colors used for the project were from the “Be Well” 2021 Palette of the Year, which aimed to represent optimism and nostalgia. The use of green as the primary color aims to represent new beginnings and the freshness of spring.

For the project, PPG brought together nearly 30 volunteers for almost 60 hours to revitalize and beautify the school’s exterior. Completed in cooperation with the TEDA Charity Association, PPG was reported to have provided more than $50,000 (approximately RMB 330,000) to assist with the project and 93 gallons of its Seigneurie exterior paint.

Featuring an orange tone and a minimalist design, the refurbishing project used different saturations of colors to echo the orange hue of the original exterior walls and achieve an integration of colors. This decision, combined with the building’s round corners, PPG reports the structure’s exterior walls now resemble a book, suggesting opening a new chapter for a bright future for the children.

To support the project, PPG contributed $60,000 (51,000 euros), including 66 gallons (250 liters) of Peintures Gauthier paint by PPG. The company further reported that Bleu Oman, a bright blue hue, was used in the bedrooms to promote sweet dreams, while Jaune Klee, a vibrant yellow, was applied to the building’s hallways.

And in November, PPG announced the completion of its second Colorful Communities project in Tianjin, China. For this project, located at the Guardian Angel Autism Rehabilitation Center, more than 40 volunteers from PPG’s Tianjin site worked together for nearly 150 hours revitalizing and beautifying the center’s interior. According to reports, the Guardian Angel Autism Rehabilitation Center cares for nearly 20 autistic children and was established in 2011.

Completed in a theme PPG calls “love and security,” the crews refinished the center’s lobby, multi-function room, reading corner, music classroom, gym and other interior spaces. The design, which focused on natural scenes, included sky and clouds painted on ceilings and walls to create a sense of three-dimensional immersion.

According to PPG’s press release, Disney Parks, Experiences and Products provides a myriad of opportunities for color enthusiasts and painters alike to bring dreams to life for all who visit Walt Disney’s magical destinations. Not only will PPG’s coatings be utilized to bring pops of color to the facades of some of the most famed streets in Florida and California, but protective coatings will also protect the spaces where guests eat, play, stay and relax.

A wide variety of PPG paints and coatings products are on display throughout Walt Disney World Resort and Disneyland Resort, including:

Other PPG coatings brands have also been applied at Disney locations and over 30,000 unique paint colors were developed by the company to enhance guest experiences.