According to an analysis of the U.S. Bureau of Labor Statistics’ Producer Price Index data by the Associated Builders and Contractors, construction and nonresidential input prices both rose 2.3% in May.

In looking to the 11 subcategories of construction materials, the association reported that input prices were up in 10 of them for the month. The largest price increases were in natural gas (+39.7%) and unprocessed energy materials (+16.3%)—the same two subcategories reported in April. 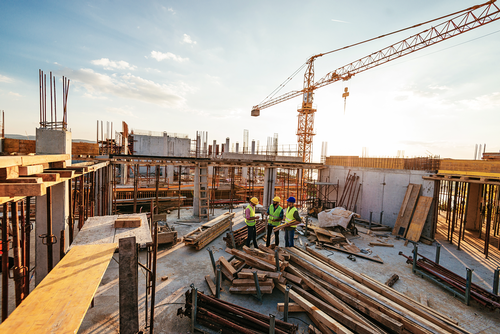 Drazen_ / Getty Images
According to an analysis of the U.S. Bureau of Labor Statistics’ Producer Price Index data by the Associated Builders and Contractors, construction and nonresidential input prices both rose 2.3% in May.

“Inflationary pressures show no signs of abating,” said ABC Chief Economist Anirban Basu. “For months, economists and others have been expecting inflation to peak and then subside. Instead, the Russia-Ukraine war has disturbed markets, driving energy prices higher. Those elevated energy prices are now circulating across the economy, affecting manufacturing and distribution, and there is little prospect for inflation to meaningfully subside during the weeks ahead.

“Federal Reserve policymakers will continue to aggressively combat inflationary pressures,” said Basu. “But what the Federal Reserve most directly affects is demand for goods and services, not supply. By tightening monetary policy and raising interest rates, the Federal Reserve will suppress demand over the rest of the year. Eventually, suppliers will respond to diminished demand. This dynamic will quite likely drive the economy into recession either later this year or at some point in 2023.”

On the same day the ABC report was issued, the Associated General Contractors of America found in an analysis of government data that for the first time since material prices began to soar, contractors’ bid prices for constructing new nonresidential buildings had finally caught up in May

“After enduring more than a year of runaway increases in the cost of items needed to build projects, contractors have finally raised their bid prices by an equivalent amount,” said AGC Chief Economist Ken Simonson. “But the runup in materials costs appears likely to continue to pressure contractors’ profit margins.”

In looking at the price index specifically, AGC reported the following increases over 12 months:

Simonson also noted on several other double-digit increases on other price indexes that affect construction. Some of which included roofing asphalt and tar products, which rose 18.9% over 12 months; insulation materials, 16.6%; paving mixtures and blocks, 16.1%; concrete products, 12.0%; and construction machinery and equipment, 11.5%.

“Based on the historical lag between the performance of the economy and nonresidential construction spending, more difficult times could be ahead for contractors in 2024 or 2025,” warned Basu.

Should Japan go over that amount, however, the tariff would be reinstated on any additional steel imports. According to the U.S. Commerce Department, Japan is one of the top 10 sources of steel to the nation but only accounts for roughly 4% of all steel imports.

In a recent report issued by ConstructConnect, economists looked at whether the easing of year-over-year construction material prices was promising, or just wishful thinking.

According to the report, in June of 2021 the average year-over-year gain for the two Producer Price Index (PPI) series designed by the Bureau of Labor Statistics (BLS) to specifically capture construction input costs was +30.0%. The latest average climb for this month is down by nearly half, to +16.4%.

While the industry is still witnessing hefty year-over-year price increases for steel and aluminum products, the larger jumps are more recently being recorded in the energy-related products. Nevertheless, ConstructConnect reports that the number of inputs with outsized percentage increases over the last 12 months is considerably less than earlier this year.

Although there is encouragement that could be taken from the report that the worst of construction material inflation is receeding, there is hesitation that the numbers could only be temporary.

Earlier this month, financial services company Moody’s Analytics reported that although the U.S. economy continues to witness inflation, dropped savings rates, and increased revolving credit and interest rates, there is still reason to be optimistic that consumers won’t buckle under the pressure.

To mitigate these issues, the Federal Reserve began a series of interest rate hikes. Recently, the Fed was reported to have raised the rates by half a percentage point in May—the largest increase since 2000—and has signaled further half-percentage-point increases in July and August.

President Joe Biden was also reported to take action to reduce gas prices and combat inflation since March, including the release of one million barrels of oil per day from the nation’s Strategic Petroleum Reserve. Additional efforts will also address affordability for families, prescription drugs, housing and childcare.

In the report, Moody’s Analytics Chief Economist Mark Zandi explained that in recent weeks, inflation expectations have fallen and are more consistent with inflation soon receding. What gives Moody’s this indication is not the price hikes we continue to see, but bond investors when gauging the direction of monetary policy. These actions are called one-year, five-year forwards—a measure of consumer price inflation beginning one year from now over the subsequent five-year period.

With these inflation expectations contained, it is believed that it will recede so long as the pandemic continues to fade and that the worst of the economic fallout from the Russia-Ukraine war is behind us.

Apart from these findings, Zandi also pointed out that none of the problems that typically plague the economy and cause or contribute to a near-term recession or downturn are evident at this time. Unlike the Great Recession where households and corporations struggled with record-heavy debt burdens, American families today devote smaller shares to interest and principal payments and businesses are seeing wide profit margins.