BlastOne Wraps Up Another Demo Day in Columbus

BlastOne started 42 years ago in Australia after now Global CEO Tim Gooden became aware of the resulting adverse health effects—and in worst cases, fatalities—when he and his friends were blasting with silica sand. Through the creation of the distributor, Gooden's mission is to focus on blasters and industrial painters to make their life safer, faster and cleaner.

During its third event of the year, BlastOne presented live demonstrations of several products, including new, patent-pending technologies, presentations and product overviews designed to inform and educate attending industry professionals on the latest technologies and workforce developments in the surface preparation sector.

As attendees arrived for the Technology Demo Day on Thursday, they were met with a variety of resources, inspection tools, blasting technology and safety equipment.

Several of these items found on tables—some of which were later observed in live presentations—included Extreme Inspector Kits from DeFelsko, copies of JPCL magazine, Graco’s Contractor King and nozzles, portable lighting systems from Western Technology, and other items from Atmospheric Plasma Solutions, Axxiom Manufacturing/Schmidt, TruQC and RPB Safety, a GVS Company.

Attendees were also able to observe and tour BlastOne’s equipment rental fleet. The company reportedly invests heavily into the rental fleet to help customers get where they need to be. 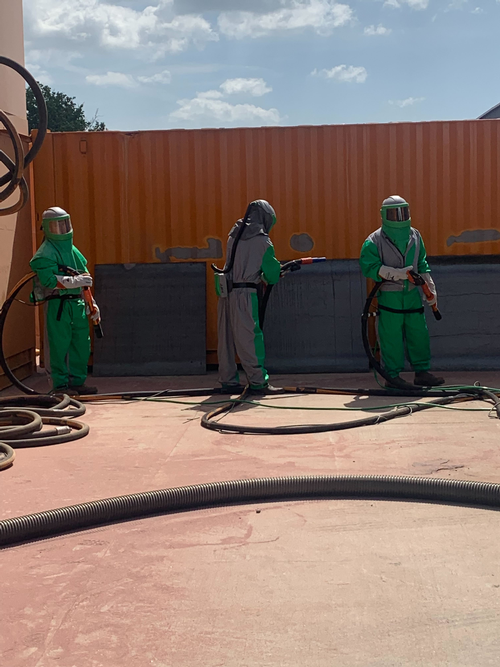 One of the first technologies to be observed was BlastOne’s MistBlaster, a specific blasting technology capable of shifting between wet and dry blasting with the flip of a switch. The MistBlaster is reported to offer low water consumption, going through just one half-pint per minute.

According to BlastOne, the MistBlaster is also an environmentally safe, cost-effective surface cleaning method that reduces airborne dust and requires less containment. The MistBlaster offers four modes: wet and dry blasting; wash down; and blow down.

In a following presentation to compare multiple blasting nozzles, BlastOne staff demonstrated the differences in both use and productivity using a traditional #7 blast nozzle alongside its Snakebite XQ Blast Nozzle and the Snakebite Strike #10 Silenced Blast Nozzle. According to those blasting, the Snakebite XQ feels more like a #5 blast nozzle, due to the patent-pending reduction in kick-back thrust. BlastOne reports that this specific nozzle is the quietest in the world, with up to 16dBA noise reduction. The Snakebite XQ also achieves 45% less fatigue compared to standard blast nozzles and is available in various sizes.

The Snakebite Strike #10 Silenced Blast Nozzle was reported by blasters onsite to feel more like a traditional #7 blast nozzle, and according to BlastOne, is the highest productivity handheld blast nozzle available in the market. This demonstration achieved a dramatic 50% increase in productivity over the conventional nozzles. Like the XQ, this technology also features up to 16dBA noise reduction.

In an autonomous demonstration, BlastOne featured its VertiDrive M7.1 Magnetic Robot Crawler. This multi-purpose solution is reported to increase productivity by 800% and can blast up to 60 square meters (646 square feet) per hour. Completing the work of what would otherwise take three blasters, the VertiDrive M7.1 can operate upside down on steel surfaces via magnets and is compatible for use on horizontal, overhead and vertical surfaces.

All blasting operations were reported to use ToughBlast Garnet by GMA as the abrasive material.

Other BlastOne technologies featured during the Technology Demo Day included the IntelliBlast, a patent-pending technology that aims to allow real-time monitoring of abrasive consumption and other blasting data from a remote location, and Vacuload 1, a compact vacuum system powered entirely by compressed air.

Gooden went on to note during the live IntelliBlast presentation that operators would be able to select the abrasive, inlet pressure and inlet temperatures, while also knowing the current outlet flow, outlet pressure and dew point for up to four hoses at a time.

During a lunch break, RPB gave safety presentations on a full-range of tight- and loose-fitting respiratory protection. During this time, Western Technology also provided an overview of its various portable BODYLights and BRICK.

Back outside for closing presentations, Atmospheric Plasma Solutions demonstrated how coatings could be removed using plasma with its PlasmaBlast technology. Reported to be an innovation in surface preparation, the portable PlasmaBlast removes coatings, cleans surfaces and promotes adhesion. Weighing just 35 pounds, the technology can fit within a submarine hatch or be hoisted up a wind tower, as well as be utilized in other small, confined areas.

The PlasmaBlast has been used on the Sydney Harbour Bridge for coating removal in bolts, screws and hard to reach areas; this is in conjunction with the AMPP standard SP21523 that was recently passed. AMPP's SP21523 Atmospheric Plasma Coating Removal and Surface Preparation standard contains the general requirements for the safe and effective use of portable non-thermal plasma technology equipment for coating removal and surface preparation of metallic and nonmetallic surfaces prior to maintenance, repair, recoating or to provide a clean, contaminant-free exposed surface.

Before the event came to a close, Regional Sales Manager of Axxiom Manufacturing/Schmidt Chad Lindquist demonstrated the company’s deadman safety technology for blaster operators. Known as BAABS (Blasting Accessories and Assist Bracket System) the deadman safety control is designed to keep operators safe and incidents down. Axxiom designed BAABS with the blaster in mind.

BAABS redirects most of the blast nozzle thrust onto the Thrust Management Brace Assembly, which can be placed onto the chest or other parts of the body capable of absorbing thrust for longer durations. The technology also works to direct the strength demand directly onto the torso, requiring a smaller number of muscles to manage nozzle thrust which significantly reduces operator fatigue.

Thursday’s activities ended with a social and networking period between attending contractors and companies.

Earlier this year, BlastOne hosted a Technology Demo Day at its headquarters in Columbus, Ohio, in February.

Before witnessing some of the blasting equipment in action, BlastOne utilized its diesel powered VecLoader 721 trailer-mounted vacuum. Reported to be one of the most powerful vacuum units available, the machinery has 3,660 CFM and 28” HG of suction. The cyclone/dust collector is hydraulically raised to allow loading of waste material into bulk bags or into a dumpster.

Following this introductory demonstration, Jim Gooden presented one of BlastOne’s newest innovations, the IntelliBlast. The patent-pending technology aims to allow for real-time monitoring of abrasive consumption and other blasting data from a remote location. Gooden went on to note during the live presentation that operators would be able to select the abrasive, inlet pressure and inlet temperatures, while also knowing the current outlet flow, outlet pressure and dew point for up to four hoses at a time.

BlastOne team members then highlighted another new technology: the Snakebite XQ Blast Nozzle. Noted to reduce sound by up to 20 decibels, the nozzle silencer also promotes a reduced thrust and was previously presented at Coatings+ in Phoenix.

According to BlastOne, the team partnered with the Center for Hypersonics at Queensland University in Brisbane, Australia, to define the new geometry that works to maximize nozzle cleaning efficiency while producing reduced noise and thrust. The new technology was developed utilizing Computational Fluid Dynamics modeling to simulate performance and later underwent Schlieren experiments.

After contractors were given the opportunity to feel the differences in operation for themselves, BlastOne proceeded to present its MistBlaster. Next up was the BlastOne Tornado XL, a high-efficiency blaster featuring two hyper-powered robotic spinning nozzles that are noted to produce blasting outputs of five manual blasters.

During the demonstration, the Tornado XL was mounted to an excavator, but the BlastOne team reported that the technology has multiple mounting options and is very versatile.

The morning’s demonstrations ended with a presentation of Fletcher’s Model Bk-80 multi-purpose blaster. Given the name for its ability to reach 80 feet, the robotic model is capable of ultra-high-pressure water and abrasive grit blasting.

After lunch, attendees stayed within the facilities where Jim Gooden gave a presentation on “Dangerous Dust: Beryllium and Silica.” During the presentation, Gooden offered insight and factual reports from OSHA and other entities on the severity of these health-threatening materials. For a portion of the presentation, Vice President of New Market Development and Technical Management at GMA Garnet Group, Pete Mitchell, offered additional insight into the various types of abrasives and what toxins can still be found in materials such as nickel and coal slag, among others.

The presentation was followed by an open discussion, “Knowledge Sharing: Industry Tips & Best Practices.” During this discussion, attendees shared their insights and what they were doing to minimize project costs and job rates.

When entering the second half of the event, BlastOne took attendees outside for several live demonstrations, starting with an internal pipeline blasting robot. Ideal for penstocks, tunnels, pipelines, wind towers and other pipe internals, the technology is capable of blast cleaning a full 360 degrees and can be self-propelled forward or in a reverse motion.

During the final presentations, BlastOne held demonstrations of its VertiDrive B7100 Blasting Robot and Schmidt AmphiBlast MegaBlaster.

The VertiDrive overcame vertical heights while simultaneously blasting within a five-foot-wide blast pattern. The semi-autonomous robot is suited with two strong magnets, various sensors can handle up to three, number eight nozzles at a time. Its swing arms can be adjusted for width, speed and distance from the surface.

The MegaBlaster offers up to four sandblasting operators to simultaneously control any combination of wet, dry or blown down modes. This technology is reported to be ideal for high production use.

After the demonstrations has ceased, BlastOne ended the afternoon with tours of its facilities and break-out sessions with specialty tools and networking opportunities between attendees.

Other Events Attended, Hosted by TPC

The conference featured technical sessions, keynotes and an exhibit hall, as well as several competitions, education sessions and networking events from June 12-15.

Taking place from Oct. 10-13 at The Westin Lake Las Vegas Resort & Spa in Henderson, Nevada, TPC will cohost its Commercial Contract Connect event in conjunction with the Commercial Painting Industry Association’s Leadership Conference for several days of facetime with top commercial painting contractors and coatings suppliers, educational sessions and meetings between leadership teams of some of the most successful commercial painting businesses in the world.

The event also promises world-class group activities, which include golf at one of the finest courses in the country and a helicopter tour over the Grand Canyon, courtesy of The Sherwin-Williams Company.

Registration for the CPIA Leadership Conference can be accessed here. To be considered for Commercial Contractor Connect, interested contracting companies must fill out the attached application here.

At the end of October, TPC will host its fifth Contractor Connect event from Oct. 25-28 at the Hammock Beach Golf Resort & Spa in Palm Coast, Florida. The hosted buyer event will bring together qualified buyers (contractors) and sellers (suppliers) through a variety of networking activities and prescheduled one-on-one meetings.

To maintain an intimate setting for the event, Contractor Connect selects a limited number of industrial painting contractors with qualified buying power to connect with sponsoring suppliers who provide the products and services they need.

To be considered, interested contracting companies must fill out the attached application here.

A list of previous contractor participants can be viewed here.

Suppliers in the protective and marine coatings industry are offered exclusive opportunities to participate as sponsors, building relationships with current and prospective customers in fun and productive ways.

Interested suppliers will have the option of becoming a Platinum or Silver sponsor. Details regarding these supporting sponsorships and their benefits can be found here.