About the Wheeling Suspension Bridge

Originally built in 1849, the structure was reported at one time to be the longest suspension bridge in the Western Hemisphere, measuring roughly 1,010 feet from tower to tower, with its longest span measuring 949 feet.

Over time, the suspension bridge has been added to the National Register of Historic Places and listed as a Historic Civil Engineering Landmark. 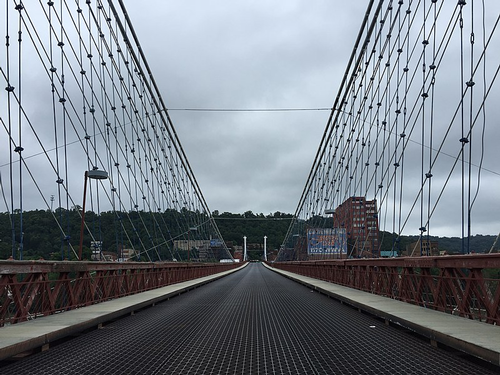 In March 2013, a snapped cable discovered during a routine inspection forced the closure of vehicle and pedestrian traffic on the bridge. According to Dave Sada, the Division of Highway District 6 Bridge Engineer at the time, corrosion was the culprit behind the cable break.

The bridge has a total of 12 iron cables—10 large and two small—suspended from its towers. In 1983, the cables were examined and determined to be in good condition; however, the cables were then rewrapped with a modern, elastomeric plastic, according to a historic record from the Ohio County Public Library.

At the time, state highway officials had already been planning to clean, paint, upgrade lighting and make minor structural repairs to the span. Work for the project was projected cost up to $8.2 million and was slated to start later that year.

However, in February 2015, frigid temperatures were blamed for another snapped cable, causing a second shutdown for emergency repairs in two years’ time.

By September 2019, officials told WTRF that the Wheeling Suspension Bridge would close indefinitely to all vehicular traffic, but would remain open to pedestrians.

“It’s very important for us to make sure that we maintain that bridge and it’s very important that we also don’t put it at risk and so in order to keep the bridge, people and public safety, it was decided upon to close that until permanent repairs can be made,” Joe Yuszczak, Acting District Engineer said at the time.

Previously, the bridge had closed for a six-week period in June, after a charter bus that exceeded the structure’s weight limit, crossed. The bridge was reopened after receiving additional signage and passing various inspections.

In 2020, the West Virginia Department of Transportation, Division of Highways in coordination with the Federal Highway Administration released a proposal for the rehabilitation of the Wheeling Suspension Bridge. In a statement issued by the WVDOH, the Department intended to rehabilitate the structure and announced some associated closures with the project.

More specifically, a temporary closing of the Wheeling Heritage Trail—a paved shared-use trail that extends along the east side of the Ohio River—to ensure the safety of trail users while crews move materials and equipment for the project.

In December 2020, WVDOH rejected a single bid on the project that was far more than the DOH engineering estimate.

In August last year, the WVDOH and Governor Jim Justice announced that the contract to repair and rehabilitate the bridge was awarded to Advantage Steel & Construction, LLC, of Saxonburg, Pennsylvania, for $17,907,147. Work includes making necessary repairs to the historic bridge’s superstructure and substructure, replacing any damaged suspension cables, renovating lighting, and cleaning and painting the span.

“I’m excited that this incredibly important project to rehabilitate the Wheeling Suspension Bridge is now in the works,” Gov. Justice said at the time. “This bridge is a landmark piece of our state’s history, and I am fully committed to doing all we can to preserve it for generations to come.

“Through our work on this project, we will restore the bridge back to its historic beauty so it can continue to connect the great community of Wheeling to the world for generations to come.”

“This bridge is an icon,” said Deputy Commissioner of Highways Jimmy Wriston. “Being able to preserve that structure is important, not only to the city of Wheeling but to the state as a whole.”

According to reports from The Intelligencer, old paint on the bridge is being removed using Sponge Jet blasting. This method is more environmentally friendly as it does not use water or air, but pieces of sponge that are caught by tarps underneath to be recycled and reused.

The painting subcontractor awarded the contract is 446 Painting of Canonsburg, Pennsylvania.

Before the new paint is applied, a gray primer was used on the structure. The wooden portions of the bridge are being painted red, while the cables are planned to be repainted white.

Structural work is also reportedly planned to begin in June or July. While the bridge cables will remain, new anchors will be drilled for them. Additionally, some steel work will be completed.

The State Division of Highway officials have said that it is still undetermined if the bridge will be reopened to traffic following the renovation.

Work on the suspension bridge is expected to be finished in June 2023.