Currently, the Coatings TraQr will be available for use in the paint and coatings industry, co-marketed to users through a partnership with the American Coatings Association. The company plans to expand the TraQr to other industries in the future.

ChemQuest reports that the tracker was developed by listening to clients throughout the specialty chemicals value chain as a response to industry needs. While the company publishes a five-year U.S. industry market overview and forecast with the ACA and a global iteration with the World Coating Council, the TraQr will offer current quantitative data to complement the qualitative and quantitative data in the published reports.

The TraQr was built on Microsoft’s Power BI platform for data analysis and visualization, using its “key influencers” machine learn and artificial intelligence to analyze data and rank factors based on level of impact. The tool’s ability to model and integrate combinations of factors that drive revenue and profit growth against an enterprise’s sales data to analyze its business-cycle phases is reportedly the first of its kind for the industry. 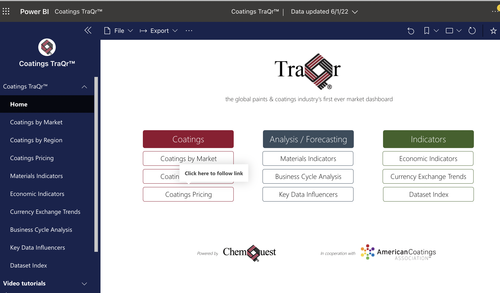 For example, ChemQuest states, if Commercial Construction drives a business segment, the TraQr can perform a real-time analysis of nearly 100 additional factors and combinations. The data is centralized for easy accessibility, including a user-friendly interface that is easy to navigate, filter and customize, as well as saving and sharing data.

“TraQr will provide our industry with the information needed to better understand market drivers, optimize inventory planning, resource allocation, drive product development and grow their business,” said Dan Murad, CEO of The ChemQuest Group. “We are excited to introduce our first iteration, Coatings TraQr, with other industry verticals to follow in the future.

“We anticipate that TraQr will provide important insight for our clients. TraQr complements our ongoing work in market research and strategy development, where we uncover trends, drivers and unmet needs.”

Last month, ChemQuest announced that it has appointed Dr. Lan Deng and Jason Woods as Directors in an emailed press release.

According to the release, Deng has previously served leadership roles at Dow Chemical, Sherwin-Williams and PPG across R&D, product management and strategic planning for over 15 years.

Most recently, ChemQuest reports, she has served as the global technical director for automotive OEM business at PPG, overseeing the global product development of technologies such as pretreatment, E-coat, primer, basecoat, clearcoat, adhesives and sealants.

Deng earned her B.E. degree in polymer materials and engineering from the University of Science and Technology of China, and her Ph.D. in chemistry is from the University of California, Berkely. Co-author of six journal articles, she also earns 16 granted patents and has earned R&D 100 Awards and the EPA’s Presidential Green Chemistry Challenge Award.

Woods reportedly joins ChemQuest with 25 years in the paint industry, serving leadership roles in R&D, operations and quality in various customer segments such as automotive OEM, automotive refinish, paint sundries, protective and marine, and architectural. Additionally, these responsibilities were international in the Asia, Europe and South America regions.

Woods studied chemistry and political science at Virginia Tech and began his career at PPG Industries in Cleveland, Ohio. Afterwards, he held a variety of roles, including an expatriate assignment in Japan, before transitioning to Sherwin-Williams.

Woods said that he is particularly interested in helping clients understand the processes of commercialization, the stakeholders involved and the practical steps associated with adapting technology to a product. He is also reportedly well-versed in developing innovation portfolio, improving efficiencies and developing the next generation of internal leaders.