At the beginning of June, Pittsburgh-based Finish Robotics announced the release of its Finishbot Autonomous Coating System.

Relatively new to the construction robotics sector, Finish Robotics was founded in 2021 by Ricky Houghton and Robb Myer. The company’s vision is to bring factory automation and productivity to the construction industry for surface preparation and coating using collaborative, autonomous mobile platforms.

Finish Robotics reports that its team of engineers, product designers and operators have helped to solve some of the modern commercial painting industry’s most pressing skill gaps and labor shortages. 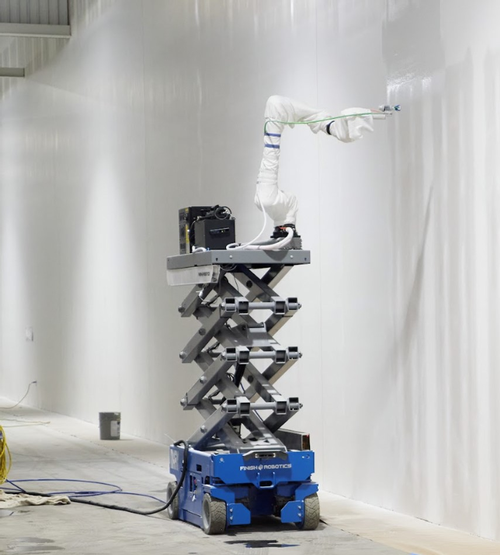 Finish Robotics
At the beginning of June, Pittsburgh-based Finish Robotics announced the release of its Finishbot Autonomous Coating System.

According to Finish Robotics’ press release, the autonomous technology allows professional painters to complete jobs up to 75% faster than traditional methods.

“We optimize our design and engineering around time to value,” remarked Houghton, Co-Founder and CTO of Pittsburgh-based Finish Robotics. “We arrive on-site and start producing within 30 minutes. There is no pre-programming of the job site required beforehand, and not much changes with the human process to integrate a Finishbot into the crew.”

Houghton went on to note in the release that the Finishbot Autonomous Coating System was developed after dozens of interviews and site visits with commercial painters and industry experts to define how job productivity could improve without changing existing human workflows.

Before the interviews and since after, Houghton has spent his career building and launching hardware and software robotics companies. With the recent uptick in uses of autonomous mobile robots and vehicle innovations, he quickly realized the opportunity for the construction, and more specifically, the coating industry.

Finishbot Autonomous Coating Systems have already completed over 125,000 square feet of painting with several early pilot customers in the Pittsburgh area. With the early success and potential of the technology on full display, Finish Robotics is planning to expand its pilot program and distribute Finishbots to additional construction sites in the upcoming quarter.

The company, which claims to have created the world’s first intelligent wall painting robot, notes that the technology is specifically designed for construction, painting and related coatings sectors.

Located in Downtown Dubai, the coatings work for the dual-tower complex, dubbed “Forte,” is being carried out in a stage 1 trial.

According to reports, the idea for the multi-building residential complex was first revealed in May 2015, with construction breaking ground the following year. Designed by architecture firm Nikken Sekkei, Emaar Properties noted that the pair of buildings, dubbed “Forte”, reflects the Japanese firm’s values of community, credibility, selective design and collective independence.

For the project, AECOM was hired as an architectural consultant and Target Engineering Construction Company served as the general contractor.

Inside, the structure features one-, two-, three- and four-bedroom apartments ranging from 650 to 1800 square feet in size. The complex also features a gym, children’s playground, resident’s lounge and swimming pool.

At the time of the contract award, utilities and interior work on the project were still underway, with MYRO International trialing its painting robots on the property.

On its website, MYRO adds that the painting robot is accountable, fast—up to 10 times faster than manual painters—safe, precise and consistent, among other features. The smart robot can operate for up to 24 hours at a time, can be pre-programmed to create floor plans in less than an hour and can accurately configure non-paintable areas on walls as well.

According to Arabia Business, MYRO International has previously completed over 300,000 square feet of onsite painting work for several construction firms in India. In another, more recent project, MYRO was deployed on a trial basis for a luxury villa compound at Dubai Hills Estate, where its performance was carefully evaluated.

Compiled data from these projects revealed that the productivity of the MYRO robots accumulated to nearly 1,000 square feet of coated surfaces per hour. Typically, in a single apartment unit, it takes up to four days of manual painting. MYRO, however, can auto-paint the same area within just four hours.

After hearing about the robot’s success, Emaar Properties decided to bring MYRO to its Forte project, saying that the decision aligned with its strategy to constantly seek new construction technologies that shape the industry and provide the best quality finishes across its portfolio.

Apart from this project, MYRO International reports that it has plans to complete other projects in Brazil and the United States in the first quarter of 2022.