In a recent report by financial services company Moody’s Analytics, economists say that although the U.S. economy is witnessing inflation, dropped savings rates, and increased revolving credit and interest rates, there is still reason to be optimistic that consumers won’t buckle under the pressure.

“Recession is not inevitable today, nor is it the most likely path for the economy,” Moody’s Analytics Chief Economist Mark Zandi said, noting aggressive actions taken by the Federal Reserve, inflation expectations, corporate profits and consumer savings.

In an interview on C-SPAN, Zandi stated he would put the odds of a recession beginning in the next 12 months at about one in three, with more “even odds” within two years.

“Recession risks are high, but I think that if we do suffer one over the next year or two, it will be a more typical, relatively mild economic downturn,” said Zandi.

In looking at the 11 subcategories of construction materials, the association reported that input prices were up in 10 of them for the month. Softwood lumber was the only category in which prices decreased, falling 17.7% for the month and down 5.5% from last year. The largest price increases were in natural gas (16.9%) and unprocessed energy materials (10.3%). 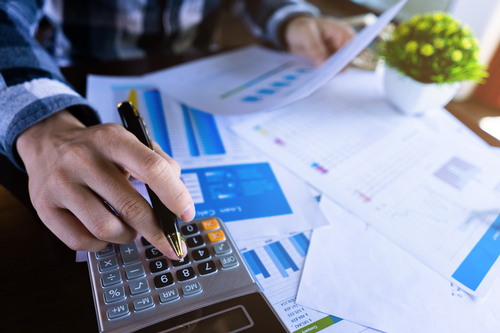 Pravinrus Khumpangtip / Getty Images
In a recent report by financial services company Moody’s Analytics, economists say that although the U.S. economy is witnessing inflation, dropped savings rates, and increased revolving credit and interest rates, there is still reason to be optimistic that consumers won’t buckle under the pressure.

“There are some economists who believe that inflation has peaked,” said ABC Chief Economist Anirban Basu, at the time. “Even if that were true, stakeholders should not expect dramatic declines in inflation in the near term given an array of factors placing upward pressure on prices: the Russia-Ukraine war, COVID-19, a shrunken labor force, elevated transportation costs and abundant demand for goods. Today’s PPI release indicates that producers continue to ask for and receive elevated prices for their limited production. These high input prices will continue to circulate through the economy as production continues, whether in the form of manufactured goods, buildings or infrastructure.”

In looking at the price index specifically, AGC noted the following increases year-over-year:

“According to ABC’s Construction Confidence Index, many contractors report that demand for their services remains sufficiently robust for them to pass along the bulk of their cost increases to project owners,” Basu added. “But at some point, the economy could weaken to the point that purchasers of construction services become less willing to pay elevated prices.

Around the same time the price index findings were released, ABC found that the construction backlog indicator in April was up slightly from March and 0.9 from one year ago, revealing 8.8 months. Despite the positive reading, the construction confidence index readings for sales and staffing levels declined for the month, however, the reading for profit margins moved higher. All three indices remain above the threshold of 50, indicating expectations of growth over the next six months.

The ABC member survey was conducted from April 20 to May 4.

That same month, PPG CEO and Chairman Michael McGarry noted in an interview with CNBC that inflation experienced by the coatings industry was starting to level off. According to McGarry, the issue with raw materials has mostly been with those made in the United States, highlighting the 2021 freeze in Texas and Hurricane Ida. In addition to those hurdles, he also touched on trucking and port issues, and strong demands.

While PPG has reportedly received better supplies in China and Europe, the company was noted to still be experiencing issues in the U.S., where 25% overall inflation was experienced in the first quarter—including labor costs, energy, transportation, raw materials and more.

To mitigate these issues, the Federal Reserve has begun a series of interest rate hikes. Recently, the Fed was reported to have raised the rates by half a percentage point in May—the largest increase since 2000—and has signaled further half-percentage-point increases in July and August.

President Joe Biden has also been reported to take action to reduce gas prices and combat inflation since March, including the release of one million barrels of oil per day from the nation’s Strategic Petroleum Reserve.

All of these efforts and more were taken into account when compiling data for the latest report by Moody’s and were utilized to predict the likelihood of a recession in the U.S.

“Recession calls are sure to get louder as the Fed continues working to rein in inflation and politicians running in the midterms portray the economy’s struggles to their advantage,” Zandi wrote in a research note. “Ignoring the calls is not advisable, but given the economy’s strong fundamentals, buying into those calls is not recommended either.”

In the report, Zandi further explains that in recent weeks, inflation expectations have fallen and are more consistent with inflation soon receding. What gives Moody’s this indication is not the price hikes we continue to see, but bond investors when gauging the direction of monetary policy. These actions are called one-year, five-year forwards—a measure of consumer price inflation beginning one year from now over the subsequent five-year period.

With these inflation expectations contained, it is believed that it will recede so long as the pandemic continues to fade and that the worst of the economic fallout from the Russia-Ukraine war is behind us.

Apart from these findings, Zandi also pointed out that none of the problems that typically plague the economy and cause or contribute to a near-term recession or downturn are evident at this time. Unlike the Great Recession where households and corporations struggled with record-heavy debt burdens, American families today devote smaller shares to interest and principal payments and businesses are seeing wide profit margins.

Perhaps the most encouraging data Zandi shared was that the nation’s financial system has arguably “never been stronger.”

While it seems clear that a recession in the near future is unlikely, other economists have been reported to agree with Zandi in that it is not inevitable that we won’t experience one in the years to come.

“When inflation has been above 4%, unemployment has been below 4%, we’ve always had a recession within the next two years,” Treasury Secretary Lawrence Summers said in a Washington Post Live video. “The likelihood is that we’re not going to get through this with a soft landing.”

In April, Deutsche Bank economists became the first major Wall Street analysts to predict a recession, noting, “We no longer see the Fed achieving a soft landing. Instead, we anticipate that a more aggressive tightening of monetary policy will push the economy into a recession.”