The American University in Cairo recently announced that four students have developed self-luminous concrete, aiming to light up roadways and pavement without using traditional energy sources. The “glow-in-the-dark” concrete absorbs sunlight and emits light in the dark.

The work was presented at the Transportation Research Board’s 101st annual meeting in Washington D.C. earlier this year. The research team also met with experts in the field, who provided recommendations on converting the project into a product.

“The concrete helps to reduce the massive amount of energy used in lighting highways or street signals needed for safe rides,” said Mohamed Nagib AbouZeid, professor of construction engineering and project supervisor, stressing sustainability and safety as two major themes for the project.

“Using this material in Egypt in such a context will reduce heavy reliance on electricity and accordingly be an active step towards fighting climate change and saving the environment,” Mahmoud explained, adding that the project aligns with Egypt’s sustainability goals. 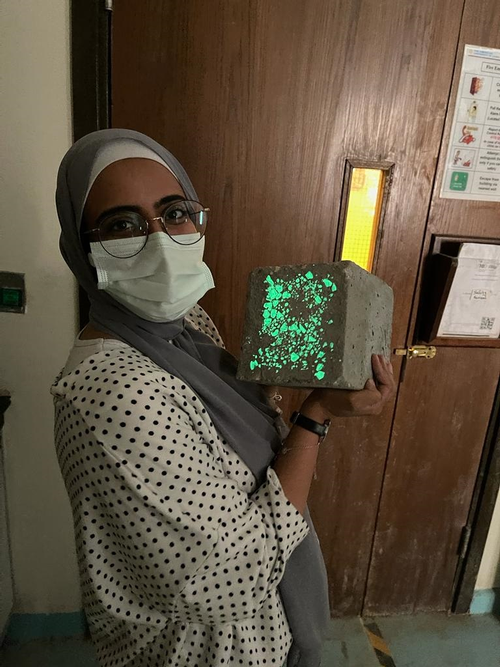 This is also reportedly one of the goals and hopeful outcomes of the 2022 United Nations Climate Change Conference (COP27), which will be held in Egypt this fall.

“The idea of our research came from wanting to make an integral construction material like concrete more sustainable and environmentally friendly in both its creation and function,” Mahmoud recalled.

The team reports that the development process involved procurement and testing of materials to determine the effect on concrete. They also reportedly focused on using locally available materials.

While development is still in the early stages, said she is optimistic about the future of the research and highlights the need to improve and expand the work. This way, they could enhance the properties of the concrete produced and minimize its capital cost at the first stage.

“Future steps include producing larger quantities as pilot trials to be evaluated on actual field conditions, such as a small stretch of a highway,” AbouZeid added.

“This research requires more experiments to provide reliable conclusions to plenty of crucial queries that remain to be answered,” said Khairy.

While AUC’s work is the most recent in glow-in-the-dark concrete research, the luminescent material has been developed and used in various products in past years as a sustainable method to light up roads, walkways and more.

The NighTec Leuchsteine concrete products, designed for industrial and commercial use, are powered by sunlight. Phosphorescent crystals embedded in the concrete capture the sun's energy and glow in the evening for about 10 hours, the company said at the time.

The concrete appears white during the day and can glow in green or blue, depending on the coating chosen. The glow is adequate to light stairwells, pavement, roads, helicopter pads and emergency exits, the company said. It can also be used as a design feature to brighten decks and walkways in architectural settings.

In addition to the Leuchsteine concrete products, NighTec offers its mix for manufacturing noctilucent (glow in the dark) concrete. The grained rough mass is designed for primary use in cement-based concrete products. The mix is formulated for use under the same conditions as normal concrete aggregates, according to NighTec.

In 2016, a team at Michoacan University of San Nicolás de Hidalgo, led by José Carlos Rubio Ávalos, developed a phosphorescent cement that it sees finding use in the construction of highways, bike paths or buildings.

Through the use of additives, the researchers were able to prevent the formation of crystals that occur in the production of cement; this creates a “material with a noncrystalline structure—similar to glass—that allows passage of light inside.”

Scientists can control the intensity of both luminescence and color by adjusting the number of additives added during production. The product, which is both eco-friendly and sustainable, Rubio Ávalos said in an interview at the time, emits light as a greenish-blue color. He added that he was working on reproducing it in red and purple as well.

Because of the physical changes that occur within the cement, it was not able to be used in structural applications, however. Instead, the team notes are meant to be added to existing surfaces as a coating material. Daily, after the phosphorescent materials within the cement absorb the sun’s ultraviolet rays, the surface should be able to glow in the dark for as long as 12 hours, even on cloudy days.

Then, in 2017, construction chemicals company Chryso Southern Africa added to its decorative concrete line with LuminTech, which features a variety of different luminescent particles that absorb UV radiation during the day and release energy at night, allowing the concrete to glow.

According to the company, the glow is visible for more than 10 hours after dark and is composed of composite recycled material and natural mineral pigments.

More recently, in 2021, the Toptint Glow solution from building materials business Tarmac in collaboration with developers Blue Deer Ltd. was installed in walkways and balconies in the Glass Yard development in Chesterfield. The decorative concrete reportedly uses light-sensitive chippings that glow and help illuminate areas such as footpaths, cycleways, and pedestrian areas.

The luminescent concrete also absorbs energy from UV rays to generate light, using recycled composite chippings into a matching concrete mix. The solution picks up and emits light after dark.