The opening marks the substantial completion of the $8 billion new LaGuardia Airport just six years after beginning construction. According to a press release issued by Gov. Hochul, LaGuardia is the nation’s first new major airport in 25 years.

“The transformation of a LaGuardia Airport into a world-class destination that is internationally recognized for its beauty is an integral part of our bold vision for a new era in New York,” Gov. Hochul said. “The opening of Delta's $4 billion Terminal C will help provide a state-of-the-art passenger experience, easing connections and creating lasting impressions. Congratulations to all who made today's milestone possible as we finish creating a whole new LaGuardia Airport worthy of New York.”

Terminal C officially opened to the public on June 4.

In July of 2015, former Gov. Andrew Cuomo revealed a massive plan to remake LaGuardia Airport from the ground up—rebuilding Terminals B, C and D—totaling 2.5 million square feet—to improve the overall impression and atmosphere for passengers and expand exterior space to ease ground congestion. 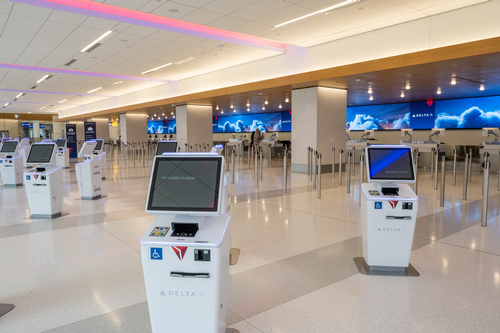 At the time, the plan called for the demolition and redevelopment of existing structures to make way for a new “grand entryway” 600 feet closer to the Grand Central Parkway, the main highway serving the airport.

In addition to renovating the terminals, other work includes the construction of a central utility plant; eight miles of road, including 20 bridges; airside facilities; and a 2,700-space parking garage. Work for these projects was being completed by 28 unions and a team of 2,400 professional and trade workers.

The $8 billion project, two-thirds of which is funded through private financing and existing passenger fees, broke ground in 2016. By 2017, crews began working on Delta Air Lines’ $4 billion part of the project, which takes place at Terminals C and D. Terminal B makes up the other $4 billion of the project’s price tag. (Its first 18-gate new concourse opened in December 2018.)

By May 2020, Cuomo announced plans for a “supercharged” reopening of New York City, which involved a fast track for multiple infrastructure plans, including the work at LaGuardia. In addition to the governor’s announcement, Delta also revealed that it was looking to finish construction “much, much sooner” than originally planned, taking advantage of reduced airport traffic amid the COVID-10 pandemic.

In May 2021, the first new skybridge at Terminal B, which serves the eastern concourse, officially opened to the public. The structure stands 65 feet above the ground and measures 420 feet long.

A few months later, in July, the Federal Aviation Administration was reported to approve a $2 billion AirTrain. According to Cotton at the time of the announcement, the LaGuardia AirTrain would create 3,000 union construction jobs and more than $500 million in business contracting opportunities for minority and women-owned businesses and local, Queens-based businesses.

Plans for the connectivity improvement project were nixed by Gov. Hochul later that same year, however. According to reports, the Port Authority and LaGuardia officials are currently looking at other possible transit links, such as an extension of the N train from the Astoria neighborhood, as alternative solutions.

At the end of January, it was reported that LaGuardia’s second skybridge opened to the public. At the time, project officials reports that the airport’s Terminal B renovation—valued at $5.1 billion—was about 95% complete.

The 485-foot skybridge was constructed using 2,500 tons of steel. Standing 60 feet above the ground and totaling 34,000 square feet, the skybridge offers passengers a direct route between the western concourse and the Arrivals and Departures Hall.

Throughout construction efforts, the side-by-side design allowed for the new span to be erected without interrupting terminal operations. The designs also provided the airport with two additional miles of taxiway space.

Project lead, Vantage, added that the renovation was the largest public-private partnership in U.S. aviation, having received about $2.5 billion in funding from project bonds, $1.5 billion from the Port Authority and $200 million in equity from LGP principal shareholders.

Although not officially completed, the airport renovation received the 2021 UNESCO 2021 Prix Versailles global architecture and design award for best new airport. For its sustainability efforts, it has also received the LEED Gold certification.

Upon completion, Terminal B will be able to provide 43% in water savings and an 18% reduction in energy costs.

According to Gov. Hochul, the construction of the new LaGuardia Airport generated a record-setting $2 billion in contracts awarded to Minority- and Women-Owned Business Enterprises, the largest participation by MWBE firms in any public-private partnership project in New York State history.

The project has also demonstrated a significant focus on working with locally-based contractors; to date, $800 million in contracts have been awarded to Queens-based local business enterprises.

On June 4, the LaGuardia Airport reached another milestone with the opening of Terminal C. At the cost of $4 billion—including a $500 million investment by the Port Authority for new roadways and supporting infrastructure—Terminal C represents Delta's largest ever investment in an airport facility.

The milestone, combined with the recent completion of the new Terminal B earlier this year, means that every passenger (except those traveling through the landmarked Marine Air Terminal) will experience new, world-class airport facilities when departing from or arriving at the airport.

According to reports, Terminal C was designed for optimal efficiency and speed, allowing travelers to navigate to and from their gates quickly and intuitively, utilizing new technologies such as hands-free bag drop and Digital ID screening capabilities.

“In a word, the new Terminal C is magnificent - an architectural gem that dwarfs the facilities it replaces in size, style and functionality. It represents 21st-century air travel that is world class in every respect - which can now be said of the entire whole new LaGuardia Airport, which six years ago was among the most reviled in the nation,” said Cotton.

“I thank Governor Hochul for her support, the entire Delta team for their indefatigable efforts and the many employees of the Port Authority who collaborated to make this new world-class airport a reality. Today proves what our region can accomplish when we really put our collective will behind such an ambitious goal.”

The LaGuardia Airport is reported to be the nation's first major new airport in more than 25 years. The airport is expected to reach completion in 2024, two years earlier than planned due to accelerated work during the pandemic.