A historic railroad trestle bridge in Coventry, Rhode Island, will be receiving a fresh coat of paint thanks to funds received from the American Rescue Plan Act. According to reports, the Coventry Town Council voted unanimously at the end of last month to appropriate $210,000 of the $10.3 million it plans to receive in funding.

The bridge, which crosses Route 117 near Knotty Oak Road, was built as part of the New York, New Haven and Hartford Rail line. It is described as one of the town’s “most well-known landmarks” and has not been repainted since a bike path in the area was completed.

Connecticut-based industrial painting contractor Blast All Inc. quoted the cost to clean and repaint the bridge at $185,000, including the safe removal of any lead paint. Blast All was reportedly recommended to Public Works Director Kevin McGee by the Rhode Island Department of Transportation.

For the remaining allotted funding, $15,000 will go towards the cost of traffic management and $10,000 will be used for refurbishing the signs on either side of the bridge. If the bridge does not have any lead-based paint, the project cost would decrease by about $8,000, according to Blast All’s bid. 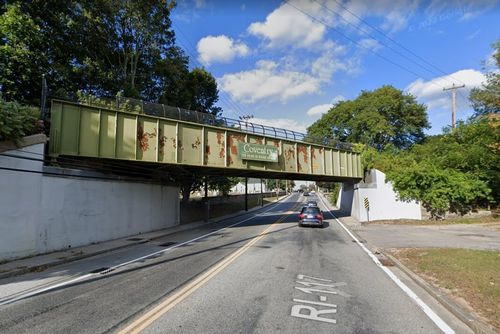 © Google, Inc. 2022
A historic railroad trestle bridge in Coventry, Rhode Island, will be receiving a fresh coat of paint thanks to funds received from the American Rescue Plan Act.

McGee told reporters that it was unclear when the work could be scheduled, but the town has until the end of 2026 to spend its ARPA funding. RIDOT, which has a controlling interest in the bridge, has indicated their support of the project, Town Manager Benjamin Marchant added but has said there may be repairs that need to be made beforehand.

However, it’s unknown if the state will make those repairs, stating that the council’s decision to allocate funds to paint the bridge should trigger RIDOT to look into other work that’s needed.

“Many, if not all, residents travel underneath this bridge,” Councilor James LeBlanc said. “It’s looking more orange than green right now, and I am in full support of repainting this bridge.”

“This, to me, is a first step in building Coventry back, and taking care of our infrastructure, and being a more welcoming and aesthetically-pleasing place,” Councilor Hillary Lima added.

“As everyone enters and leaves they should have the feeling that they’ve come to a community that they want to stay in,” Town Council President Ann Dickson said. "That it’s more than just a road to travel through; that it’s a destination.”

In April, the Newport Southbank Bridge Company announced that it hopes to repaint the Purple People Bridge, which connects Cincinnati and Kentucky, for its 150th anniversary and restore its iconic purple color.

The 2,670-foot pedestrian bridge is reportedly the longest connector of its kind in the country that links two states. On average, over 800,000 people cross the bridge each year.

The bridge was last painted 20 years ago, and as its 150th-anniversary approaches, needs a repaint. The initial purple color has reportedly dulled to a gray.

“Not only to be a pedestrian and a people bridge,” said Newport Southbank Bridge Company President Will Weber, “But we need to put the purple back in purple people.”

Newport and Cincinnati mayors have said that it’s important to keep this bridge open, safe and functional for many years to come. Last year, the bridge was closed for six months after a stone fell from one of the piers, with costly repairs.

The estimated cost to repaint the bridge is $1.5 million. Because the company is nonprofit, several events will be planned throughout the year to celebrate the bridge’s anniversary and raise money to help cover these costs. Additionally, the bridge is open to rent for private events. According to reports, the goal is to have the project completed by Labor Day 2023.