“Disney and PPG have over 50 years of rich history of collaborating, as both companies understand the fundamental importance of creating magical, inspirational and engaging spaces,” said Jaime Irick, Vice President, PPG Architectural Coatings, U.S. and Canada.

“This expanded relationship will allow us to strategically combine the experience of two well-known brands and supply PPG’s industry-leading expertise, services, resources and a variety of high-performing products to help enhance the Disney guest experience.” 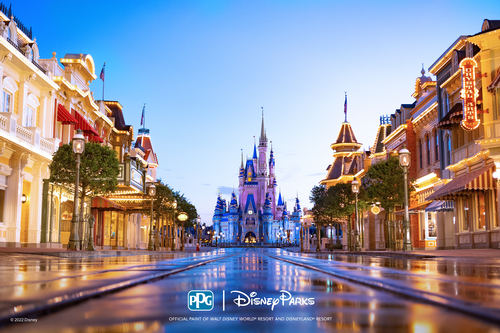 According to PPG’s press release, Disney Parks, Experiences and Products provides a myriad of opportunities for color enthusiasts and painters alike to bring dreams to life for all who visit Walt Disney’s magical destinations. Not only will PPG’s coatings be utilized to bring pops of color to the facades of some of the most famed streets in Florida and California, but protective coatings will also protect the spaces where guests eat, play, stay and relax.

“PPG paints are known for exceptional quality, and they color some of our signature immersive experiences which delight our guests as they make unforgettable memories with friends and families while visiting us,” said Doug Wagner, Vice President, Engineering Services, at Walt Disney World Resort. “We are happy to continue our relationship with PPG and keep on creating special moments for guests and their families.”

A wide variety of PPG paints and coatings products are on display throughout Walt Disney World Resort and Disneyland Resort, including:

Other PPG coatings brands have also been applied at Disney locations and over 30,000 unique paint colors were developed by the company to enhance guest experiences.

“The Disney experience is simply unparalleled, and we couldn’t be more proud of our ability to play a role in the curation of enchanting colors that make visiting their properties memorable,” said Irick. “We look forward to playing the part of the Official Paints, Finishes and Coatings Provider of Disneyland Resort and Walt Disney World Resort for years to come.”

Carlos Castro, Vice President, Disney Corporate Alliances, added, “We’re thrilled to enter into a parks alliance with PPG, expanding upon our decades-long relationship and years of teamwork. PPG is a known leader in providing innovative solutions in their industry and we look forward to our enhanced collaboration.”

A few months ago, Disneyland Paris revealed a new look and a fresh coat of paint at its iconic Sleeping Beauty Castle in celebration of its 30th anniversary.

Reported to be the most visited castle in France, the structure now features gilded, golden details and unique, lavish mosaics.

The original construction of the Sleeping Beauty Castle was launched in the early 1990s, with the park officially opening to the public in 1992. Architectural Digest reports that Disney went as far as to travel throughout all of Europe for design guidance, looking at Mont Saint Michel, the Hospices de Beaune in Eastern France and even Sainte-Chapelle.

At the time of its opening, Disneyland Paris was the first Disney theme park to open outside of the United States.

According to Tracy Eck, Artistic Director at Walt Disney Imagineering Paris, the project took two years to plan and 12 months (50,000 hours) to complete. For the project, 1,200 liters (over 370 gallons) of paint in 14 different shades were used.

Crews also custom-designed 19,900 slate tiles for the roof structures. This aspect required the cutting of 4.8 miles worth of slate and 19,000 hooks for installation. In addition, the construction team was also reported to have applied 41,200 gold leaves by hand to gild certain parts of the castle.