The Seattle Department of Transportation announced at the end of last month that the structural concrete pouring inside the West Seattle Bridge has been completed, marking another project milestone towards reopening. The bridge is reportedly still expected to reopen mid-2022.

According to the department’s blog, concrete work was originally scheduled to begin in February, but was delayed by a concrete strike that affected transportation and construction projects in the region.

“We never stopped working on the bridge, despite the concrete strike,” writes SDOT. “We adjusted the sequence of work activities so that we could complete other strengthening measures like sealing cracks with epoxy and wrapping the bridge walls with carbon fiber.”

Last week, concrete trucks made back-to-back pours, with the construction contractor pouring 15 truckloads of concrete in two days. This amount was more than half of the 245 cubic yards of structural concrete needed for the entire project.

Then, the concrete was piped into the hollow bridge interior through the deck, creating blocks to form the foundations of the bridge’s additional post-tensioning system. SDOT reports that after they have cured for 28 days, the concrete structures can hold more than 20 million pounds of force. 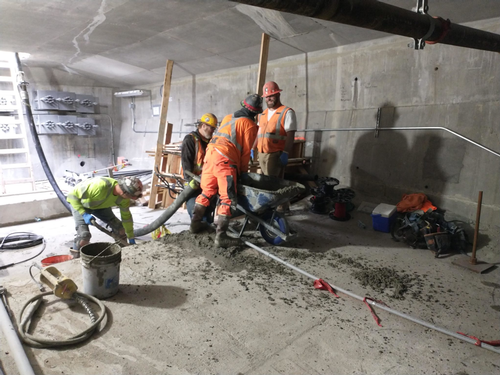 SDOT
The Seattle Department of Transportation announced at the end of last month that the structural concrete pouring inside the West Seattle Bridge has been completed, marking another project milestone towards reopening.

Ducts will be installed next in the new concrete blocks to thread steel cables through the length of the bridge as part of the post-tensioning process. Once the concrete is fully cured, the cables will be tightened to strengthen the bridge and prevent cracking.

SDOT notes that it will also be working with the construction contractor to finalize the sequence of the remaining work.

“We appreciate your patience, and we’re excited to share this progress report with you on how we’re getting closer to reopening the West Seattle Bridge,” said SDOT.

Around the same time that the sensors were installed, former Seattle Mayor Jenny A. Durkan requested a failure analysis of the structure so that emergency preparedness could be improved.

In late May last year, construction firm Kraemer North America was selected as the contractor for the job, officially putting the rehabilitation project in motion. While the Department reported that 2020 emergency measures have successfully halted the cracks from growing and that the structure is behaving as expected following additional stabilization efforts, it is ready to launch the project still ahead.

The funding is also slated to be used on the Spokane Street Swing Bridge (“low bridge”), that runs adjacent to the structure. The federal funding arrived through the Infrastructure for Rebuilding America (INFRA) discretionary grants program and is about half of the $21.6 million that the SDOT requested in its grant application back in March.

In September, SDOT reported that the final phase of repairs to the bridge were slated to begin in October. For the final phase, crews will be getting expansion joints together, among other materials, and have plans to construct and install platforms along the bridge for final repair construction.

At the time, the remaining portion of the project had a price tag of nearly $55 million, with federal funding expected to cover 70%.

In April, SDOT reported that the final core drills were completed through the bridge’s pier structure in preparation for future post-tensioning and structural concrete pouring work had begun. This will be followed by a final round of epoxy injection and carbon-fiber wrapping. Afterwards, the department will test and prepare the bridge to reopen.

With the reopening originally scheduled for mid-2022, the project might face potential delays due to a labor dispute between union concrete workers and Seattle area contractors regarding wages. The concrete delivery drivers have reportedly been on strike since December, striking an agreement in March to get construction of certain infrastructure projects, like the West Seattle Bridge, back on schedule.

Once completed, the bridge is expected to hold more than 20 million pounds of force and support 46 miles of steel cables.