The U.S. Army Corps of Engineers announced earlier this month that it has validated a South Korean concrete repair product as part of the U.S. Office of Under Secretary of Defense’s Foreign Comparative Testing (FCT) Program. The JC400 concrete repair material was manufactured by JetCon Korea Co. Ltd.

Funding was provided from the FCT to procure and test the material. The purpose of the program is to find, assess and field world-class products with a high technology readiness level to satisfy valid defense requirements more quickly and economically.

According to USACE, repair of concrete infrastructure is a primary mission within the Department of Defense, especially necessary due to environmental factors or enemy attack and. Current high-quality proprietary repair materials are available; however, the cost and time associated with these products outside the U.S. can be very expensive, partly due to the COVID-19 pandemic.

Because of this, products available from foreign countries must be thoroughly evaluated to make sure they meet performance requirements. 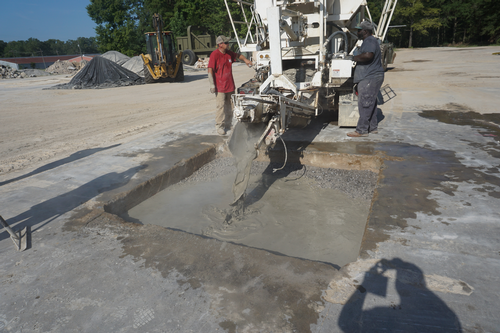 “JC400 was first subjected to the tri-service spall repair material certification protocol, which is a testing program managed by the Airfields and Pavements Branch within ERDC-GSL that provides certification for concrete repair products for use on military airfields,” said William Carruth, U.S. Army Engineer Research and Development Center Geotechnical and Structures Laboratory (ERDC-GSL) research civil engineer.

After passing laboratory testing, the material was then field tested as a surface cap on two small, 8-foot-by-8-foot and one large, 15-foot-by-15-foot airfield repairs. USACE reports that after two hours of cure time, the repairs were trafficked with simulated fighter aircraft traffic.

The repairs reportedly exhibited little or no damage after reaching the target number of 3,500 passes. This result anticipates reduced shipping costs in areas of interest, but also provides availability of a high-performance repair material for resupply if materials are depleted.

“In addition to the laboratory testing protocol, other tests were conducted to fully characterize the material. These material properties can be valuable design parameters for a variety of applications including repair of bridges, dams and other concrete structures.”

According to the release, the ERDC partnered with the U.S. Forces Korea and the U.S. Air Force Civil Engineering Center (AFCEC). The AFCEC has partnered with ERDC for several years to develop solutions for Rapid-Airfield Damage Recovery, including rapid-setting, concrete-capping materials.

AFCEC plans to potentially resupply bases on and near the Korean peninsula based on the results from this project, rather than shipping materials from the U.S.

Earlier this month, the University of Arkansas announced that it has been awarded a $3 million research grant from USACE to investigate solutions to military infrastructure problems. Assistant professor of civil engineering Cameron Murray, who has previously researched structural concrete and rapid setting cements, received the largest single award in the history of the program, according to the university.

Murray, along with colleagues and students in the department, will reportedly work to develop alternative materials for rapid repair and construction of concrete structures and pavements, heat-resistant pavement materials, novel blast resistant concrete and evaluation and mitigation methods for alkali silica reaction in concrete.

The two-year project, held at the 37,400 square foot Grady E. Harvel Civil Engineering Center (CEREC), will be in collaboration with the U.S. Army Engineer Research and Development Center (ERDC). According to the release, the CEREC site allows faculty and students to construct and test full-scale structural concrete with a variety of methods including under impact loadings.

The university reports that the Advanced Concrete Research and Development project will consist of five tasks related to concrete infrastructure:

While most of the goals target military applications, work is also expected to be applicable to civilian infrastructure as well.