ABC Speaks Out Against Davis-Bacon Act

In wake of a new report issued by the Beacon Hill Institute, the Associated Builders and Contractors are again speaking out against the U.S. Department of Labor’s Davis-Bacon and Related Acts.

While the association has asked the DOL to modernize its wage determination process for decades, the BHI report points out that a recent rule proposed in March actually makes the process even more inaccurate, inflationary and biased.

“The Biden administration’s sweeping proposal makes 50 significant changes to Davis-Bacon Act regulations, yet it does nothing to fix the systematic errors within the DOL’s wage determination process,” said Ben Brubeck, ABC Vice President of Regulatory, Labor and State Affairs.

“Besides exacerbating these well-documented flaws, the proposal expands DBA regulatory burdens and increased costs to more taxpayer-funded construction projects and industries­—including small businesses in the trucking, manufacturing and surveying industries—while failing to provide regulatory clarity to impacted contractors and stakeholders.”

As stated in its purpose, the DBRA was created to ensure employers on federally funded or assisted construction projects pay locally prevailing wages to construction workers and aims to prevent the unintended consequences of depressing workers’ wages during increased government construction contracting activity.

Since its initial establishment in 1931, the DBRA has published 71 laws applicable to federal and federally assisted construction projects. Today, those requirements are reported to cover approximately $217 billion in annual federal spending and 1.2 million construction workers. 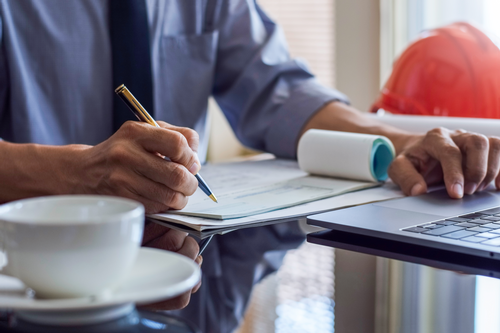 Everyday better to do everything you love / Getty Images
In wake of a new report issued by the Beacon Hill Institute, the Associated Builders and Contractors are again speaking out against the U.S. Department of Labor’s Davis-Bacon and Related Acts.

“The concern… is that those weighted averages are not reflective of actual wages paid to actual workers on actual construction projects in that local community,” said Acting Wage and Hour Division Administrator Jessica Looman during the rulemaking briefing back in March.

“Given recent unprecedented investments in our nation’s infrastructure, this comprehensive regulatory review is necessary to ensure employers on federally funded or assisted construction projects pay fair wages to the workers who build our roads, bridges, federal buildings and energy infrastructure,” said Looman.

“The Davis-Bacon and Related Acts benefit construction workers, their families, their communities and taxpayers by ensuring all contractors can compete on equal footing and by preventing employers who pay workers substandard wages from gaining an unfair competitive advantage.”

Although worker groups and unions were reportedly in favor of the proposed changes, construction employer groups were noted to disagree.

The Notice of Proposed Rulemaking was published by the department’s Wage and Hour Division in the Federal Register on March 11.

“Federal dollars should be used to create good jobs in local communities all across our country,” said Secretary of Labor Marty Walsh at the time. “These proposed regulations are good for workers, good for building high-quality infrastructure and for ensuring we have a strong construction industry, as we rebuild America.”

According to BHI’s report, “The Federal Davis-Bacon Act: Mismeasuring the Prevailing Wage,” the current method used by the federal government to calculate “prevailing wages” under the 91-year-old Davis-Bacon Act adds at least 7.2% to the cost of federal and federally assisted construction projects and inflates wages by 20.2% compared to local market averages.

The report also found that the DOL’s methodology produces government wage determinations that do not reflect local area standards and are not statistically accurate.

To assemble the report, BHI examined the DOL Wage and Hour Division’s methodology that determines how much contractors are required to pay to construction workers on taxpayer-funded projects subject to DBA regulations.

“The DBA turns federal construction spending into a costly welfare system for union workers in some markets,” according to the report. “The DBA gets periodic attention from Congress and various critics as an archaic policy resulting in waste, favoritism and reduced competition for government contracts.”

In further research, BHI found that its findings were consistent with reports critical of the DOL’s methodology by the DOL Office of Inspector General, the Government Accountability Office and think tanks published over the last 50 years.

“There is a general unawareness of the arcane statistical calculations undertaken by the U.S. DOL WHD that inflate costs. Since the law is intended to reduce wage competition, the government authorities responsible for calculating the prevailing wage are under pressure to use archaic methods for calculating a wage that is biased toward requiring union-scale wages instead of an average or even true prevailing wage,” BHI wrote.

“In addition, the DOL occupational classifications and rate of pay are not based on qualifications, experience, safety record or skills but rely only on the type of work performed on a project.”

In a press release, Brubeck stated, “This anti-competitive and costly proposal couldn’t come at a worse time for taxpayers following the passage of the Infrastructure Investment and Jobs Act, which over the next 10 years invests $550 billion of new federal money into infrastructure above baseline spending.

“The construction industry is facing unprecedented inflationary headwinds driven by supply chain disruptions, materials price escalation and a skilled labor shortage of nearly 650,000 in 2022. This rulemaking will result in more inflation and the construction of fewer roads, bridges, schools, transportation systems and utilities funded by taxpayers.”

Repeal of the DBA is likely to save taxpayers at least $217 billion over the next 10 years, according to BHI. A copy of the full report can be read here.