Researchers from the University of British Columbia and the Vancouver Coastal Health Research Institute have recently developed a nontoxic silver-based coating for medical implants that resists and kills bacteria.

The coating is also noted to help prevent patients with implanted medical devices from getting infections.

About the ‘Silver Bullet’ Coating

According to UBC, urinary tract infections from catheters are among the most common hospital-acquired infections, however, other implanted medical devices carry the risk of infection which usually arises from contamination as the device is being placed.

Developed by the team of researchers for applications such as catheters and stents, the silver-based coating was reportedly discovered after screening dozens of chemical components. While silver has long been viewed as a potential solution because of its ability to kill bacteria, it also posed various challenges.

“This is a highly effective coating that won’t harm human tissues and could potentially eliminate implant-associated infections. It could be very cost-effective and could also be applicable to many different products,” said Dr. Jayachandran Kizhakkedathu, professor in UBC’s department of pathology and laboratory medicine, Centre for Blood Research and Life Sciences Institute and co-senior author of the study. 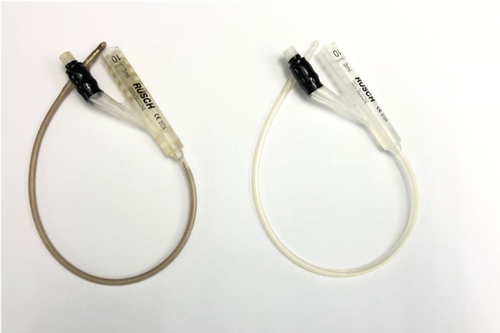 One of the main challenges with silver is the toxicity of the material. While enough will successfully kill bacteria, too much can have negative effects on human cells and tissues.

To mitigate some of these issues, the UBC team led by Dr. Hossein Yazdani-Ahmadabadi, a former chemistry Ph.D. student from the Kizhakkedathu laboratory, combined silver nitrate, dopamine and two hydrophilic polymers to develop a coating with durable and adhesive properties.

In testing, the team found that when a coated medical device was implanted, it released silver ions gradually in small, controlled quantities—enough to kill bacteria but not harm human cells. The coating was also reported to repel live and dead bacteria, in addition to other fouling agents from its surface longer than other coatings in the medical industry.

Over a period of 30 days, researchers continued to test the coating in an environment with a high concentration of diverse and resilient bacteria known to cause infections. The tested device reportedly came away with no bacteria attached. In another seven-day study with rats, the coating was reported to have performed the same way and did not harm the rats’ tissues.

“Other silver-based coatings rely on contact killing, meaning the bacteria have to attach to the material in order to be exposed to the silver and die. This results in dead bacteria building up on the surface over time and rendering the device ineffective,” explained the study’s other co-senior author Dr. Dirk Lange, associate professor in UBC’s department of urologic sciences and director of basic science research at the Stone Centre at Vancouver General Hospital.

“We’re preventing that by keeping bacteria off the surface in the first place, and then killing them with the release of silver. Since we prevent attachment of both live and dead bacteria, this coating has significant potential to maintain a clean surface for any device or material for an extended period of time, which is something we haven’t seen so far.”

Researchers add that they believe the coating could be applied to almost any material without pre-treatment used to make medical devices such as central venous catheters, urethral catheters, peritoneal catheters, feeding tubes, vascular grafts, ureteral stents or orthopedic implants.

While the team plans to test the coating on these types of items in clinical trials, their initial study has already been published in ACS Central Science.

Supported by several governmental programs, including the Priority 2030 program, the new coating is slated to be used on the walls of two Tomsk Region hospitals.

Reportedly enhanced with biocidal nanoparticles, the new paint aims to neutralize a number of common pathogens and reduce nosocomial infections.

“The paint has biocidal properties thanks to the TSU scientists. They developed zinc oxide nanoparticles doped with silver,” explained Alexander Vorozhtsov, TSU Vice-Rector for Research and Innovation. “It has been experimentally proved that these particles are effective in fighting against a lot of pathogens, including A/H1N1 flu virus and SARS-CoV-2, as well as widespread nosocomial bacterial infections like E. coli, Staphylococcus aureus, Pseudomonas aeruginosa and others.”

According to TSU, the paint Premia has two types of composition. Noted to be equal in effectiveness, only one of the paints has been tested and certified, while the second is an upgraded, cheaper version with the aim of making the paint more available to potential buyers.

In preliminary testing of both versions, developers add that the concentrated nanoparticles proved their effectiveness against a widespread collection of common nosocomial infections.

Pilot testing of the paint will be conducted in Timiryazev Central Regional Hospital and B.I. Alperovich City Clinical Hospital No 3, where biocidal paint is needed due to high risk of infection. In both locations, the paint will be applied in emergency rooms, wards, treatment rooms, relatively clean areas and, in one hospital, a manipulation room.

Over the next six months, scientists will take wipe-samples to determine the presence of bacteria and viruses, determine the efficiency of different types of compositions and investigate nanoparticle activity.