The University of Arkansas announced earlier this month that it has been awarded a $3 million research grant from the U.S. Army Corps of Engineers to investigate solutions to military infrastructure problems. Assistant professor of civil engineering Cameron Murray, who has previously researched structural concrete and rapid setting cements, received the largest single award in the history of the program, according to the university.

Murray, along with colleagues and students in the department, will reportedly work to develop alternative materials for rapid repair and construction of concrete structures and pavements, heat-resistant pavement materials, novel blast resistant concrete and evaluation and mitigation methods for alkali silica reaction in concrete.

The two-year project, held at the 37,400 square foot Grady E. Harvel Civil Engineering Center (CEREC), will be in collaboration with the U.S. Army Engineer Research and Development Center (ERDC). According to the release, the CEREC site allows faculty and students to construct and test full-scale structural concrete with a variety of methods including under impact loadings.

Additionally, the students will be able to visit the ERDC in Vicksburg, Mississippi, and present their research findings at conferences. 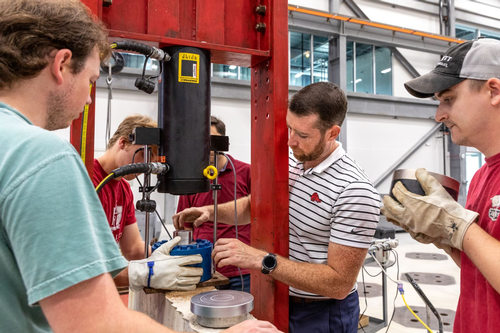 The university reports that the Advanced Concrete Research and Development project will consist of five tasks related to concrete infrastructure:

While most of the goals target military applications, work is also expected to be applicable to civilian infrastructure as well.

“One thing I always try to impress upon my students when I teach reinforced concrete design is just how important concrete is to our modern way of life,” Murray said. “It’s the second most widely used material on Earth behind water.”

Murray recently received the Walter P. Moore, Jr. Faculty Achievement Award from the American Concrete Institute at their spring 2022 convention in Orlando, Florida. The first faculty member from the university to achieve this, the award recognizes faculty members for excellence and innovation in the teaching of concrete design, materials or construction.

At the beginning of the year, researchers from China proposed a new method for analyzing cracks in plain concrete linings using the double-K fracture criterion.

Researchers looked to concrete, the main ingredient of the tunnel lining, and its fracture characteristics. Because of the materials mixed together to form the concrete, including a fine aggregate, a coarse aggregate and cement paste, the poor bonding can create a large number of microcracks, leading to reduced stiffness and strength.

In February, researcher groups from Rice University and the Kuwait Institute for Scientific Research developed a new technique to identify concrete fractures typically invisible to the naked eye.

The scientists discovered that the silicon crystals in Portland cement emit fluorescent, infrared light. According to the release, the researchers realized that the exact wavelength of the emission can be used to identify the particular type of cement in a structure, but also that, when painted with a thin coat of opaque paint, the small cracks glow under near-infrared light.

The drilled holes served as focal points to form microcracks, moving outward during compression, which also cracked the paint. The fluorescent signal was then shown through the cracks and mapped with a raster-scanning laser. The intact concrete appeared black, while the glowing light showed the cracks.

Additionally, the researchers found that the spectrum level was not affected by hydration level, testing different water-to-cement ratios and how long the cement blocks cured.

Most recently, in March, researchers from the USC Viterbi School of Engineering recently announced that they have created a new method for developing self-healing concrete, using engineered aggregates in place of natural aggregates.

The researchers proposed creating support inside the concrete that emulates existing aggregate structures to make concrete to offer a realistic option that is easily adoptable by the industry. The first step was to design engineered aggregates with healing agents that would activate once encountering cracks, as well as providing the best healing result for various types of cracks.

USC researchers created a computational model to help them identify which shape and size of engineered aggregate is optimal for varying sizes of cracks. The model reportedly offers suggestions for optimal formation in one large crack or multiple small cracks that connect to one another, but can also be applied to other self-healing concrete approaches outside of USC’s.

According to the release, the next step in the research is to study how the overall strength of the concrete is impacted by different sizes and shapes of engineered aggregate. These models are expected to provide recommendations for providing optimal healing effects, while maintaining structural integrity and strength.

Additionally, researchers will look at different types of materials to work with, including polyurethane, sodium silicate and cement. Smaller samples have reportedly been tested with only one or two engineered aggregates inside. The team conducted a test to analyze what happens with water flow through a large crack and if the concrete heals sooner rather than later.