According to the company’s press release, the $2.1 million (2 million euros) facility will provide up to 100,000 paint color matches annually, increasing the speed of developing paint color formulations as new and existing colors are reformulated. 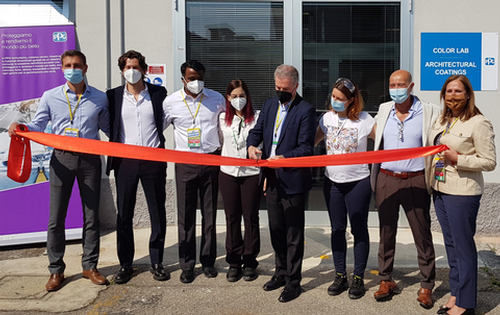 The Milan facility is reported to be a European hub for PPG product development, hosting laboratories for paints and coatings related to the automotive, architectural, packaging and industrial markets.

“The investment in our Milan facility demonstrates our long-term commitment to enhance our research capabilities to better serve our customers,” said Parag Akre, global color director, Architectural Coatings. “It makes the site a true center of excellence for paint color and gives an increased opportunity for collaboration with our research colleagues at the Milan site as One PPG.”

At the new facility, the laboratory’s automated system will dispense colorants and base paint samples, mix them, apply them and measure them, without manual inputs.

In March, PPG announced the opening of its new European Central Powder Coatings Research and Development Center. Located in Milan, the facility includes a customer application center and is expected to accelerate powder coatings product development.

According to the release, the R&D center focuses on innovating powder coatings product development, demonstrating powder technologies and providing customer and technical support. The facility also serves as a European hub for cross-technology research and development, hosting laboratories for other businesses that include automotive OEM and refinish coatings.

In April, the company announced that it was celebrating 300 years of operations in the Netherlands and the anniversary of its Sigma Coatings brand.

According to PPG, Sigma Coatings products are one of the leading architectural coatings brands in Europe. Celebrations marking the milestone started on April 6, which is also known as “Dutch National Painters’ Day” in the country. It was reported that PPG staff visited thousands of painters across the Netherlands to personally thank them for their work.

According to the release, the new facility will be strategically located near aerospace customers and the Toulouse Blagnac Airport. PPG reports this is its fifth ASC in Europe, Middle East and Africa (EMEA) region and the second in France, in addition to the ASC in Gonfreville.

The groundbreaking for the facility is anticipated in the third quarter of this year, with operations beginning in the fourth quarter of 2023.