A new method for applying antireflective coatings to 3D printed multi-lens systems has recently been developed by a team of researchers from the University of Stuttgart in Germany.

According to reports, the coatings help to minimize light losses due to reflection, which is critical in the development of high-quality 3D printed systems consisting of multiple microlenses.

In the journal Optical Materials Express, researchers from the University of Stuttgart describe their new technique for applying antireflective coatings to 3D printed lenses. The method can simultaneously coat all the surfaces that make up a 3D printed lens, reaching hard-to-reach hollow openings and undercuts created during the printing process.

This is important because in an optical system, small amounts of light are lost within each lens-air interface due to reflection. Reports note that it is because of the way the 3D printed lenses are made, that conventional applications or sputtering cannot be used as with large lenses, such as a camera lens, to reduce reflections.

With enough reflections, the imaging quality of a lens system will be negatively affected. 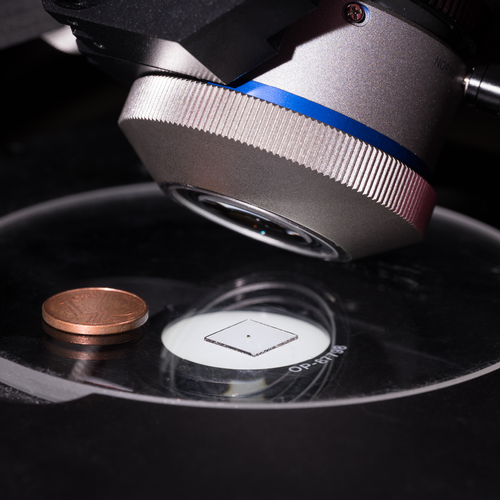 “Our new method will benefit any 3D printed complex optical system that uses multiple lenses,” said research team leader Harald Giessen from the University of Stuttgart. “However, it is especially useful for applications such as miniature fiber endoscopes, which require high-quality optics and are used for imaging under less-than-ideal lighting conditions.”

The low-temperature thermal atomic layer deposition (ALD) technique is compatible with 3D printed polymer materials and can also be used to create other thin films directly into 3D printed micro-optics. Typically, high temperatures are required for ALD to successfully apply antireflective coatings, which causes the material to melt directly to the 3D printed micro-optical system.

In new research, the team found a way to reduce the application temperature from 200 C (392 F) to 150 C. Along with the reduced temperatures, the team exposed the lens system to a gas containing the molecular building blocks of the antireflective coating.

Given that the gas molecules can move freely throughout the hollow parts of the 3D printed structure, a homogeneous thin layer is formed along all the exposed lens surfaces.

“We applied ALD to the fabrication of antireflection coatings for 3D printed complex micro-optics for the first time,” said Simon Ristok, first author of the paper. “This approach could be used to make new kinds of extremely thin endoscopic devices that might enable novel ways of diagnosing — and perhaps even treating — disease.

“It could also be used to make miniature sensor systems for autonomous vehicles or high-quality miniature optics for augmented/virtual reality devices such as goggles.”

According to the team, thickness and material properties of the coating can be adjusted by adding layers, varying the precursor gas and adjusting form sequences of high and low refractive index coatings or other AR coating designs. “We have been working on 3D printed micro-optics for several years and always strive to improve and optimize our fabrication process,” said Giessen. “It was a logical next step to add AR coatings to our optical systems to improve the imaging quality of complex lens systems.”

Researchers did stop there, though. In further assessing the coatings performance, the team characterized the ALD coatings on 3D printed samples, finding that the coatings decreased broadband reflectivity of flat substrates in visible wavelengths to below 1%.

In the future, the team plans to use their ALD approach to develop advanced coating designs with more layers, which could further reduce reflection losses for specific wavelengths and note that the ALD deposition of antireflective coatings would be well-suited for prototyping or small-series production.

The team added that they are also open to collaborating with researchers interested in incorporating antireflective coatings into other 3D printed optical systems.