An Iowa-based company has proposed a $4.5 billion, 1,958-mile carbon dioxide pipeline that would stretch across five states for CO2 recovery and storage. The pipeline would reportedly be the first interstate system in the United States, connecting bio-refineries in the upper Midwest and shipping to sites in underground caves in North Dakota.

Summit Carbon Solutions, a subsidiary of Summit Agriculture Group, is the largest of three proposals. Its plan would link 32 ethanol plants across the states to reduce the carbon footprint of ethanol production and increase its long-term viability in the agricultural business.

The Midwest Carbon Express pipeline, which began development in 2019, is currently expected to begin operation in the first half of 2024.

The company has 100,000 acres of surface area, with wells designed to permanently store 12 million tons of CO2 a year, with capacity that could be expanded to 15 million tpy, Summit Carbon Solutions Chief Operating Officer Jimmy Powell told Engineering News-Record. He added that the project would cut the carbon dioxide production of the 32 currently affiliated ethanol plants in half.

According to reports, the carbon steel pipeline would span across Minnesota, Iowa, Nebraska, South Dakota and North Dakota, with Iowa having the longest length at almost 800 miles. Depending on location, the size would range from four inches to 24 inches in diameter. 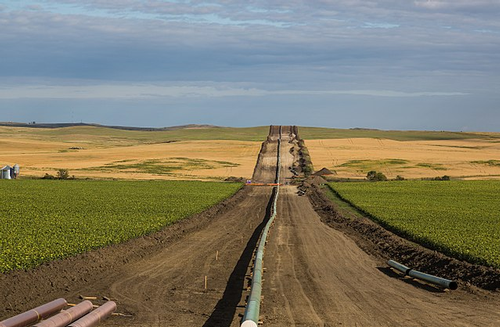 Tony Webster, CC BY-SA 2.0, via Wikimedia Commons
An Iowa-based company has proposed a $4.5 billion, 1,958-mile carbon dioxide pipeline that would stretch across five states for CO2 recovery and storage.

Additionally, according to a filing to the Iowa Utilities Commission, it would operate at 2,183 PSI and be installed at a minimum depth of 48 inches.

Summit has reportedly filed for a hazardous liquids pipeline in two states, and it is also seeking necessary permits in North Dakota this month. The project would require a U.S. Army Corps of Engineers Clean Water Act permit for three major river crossings.

Wood Engineering performed early front-end engineering and design and Trimeric Corp., which has carbon capture system design experience, is conducting preliminary engineering on systems that will be located at each ethanol plant, Powell said.

EPC contracts have reportedly been awarded for all phases of the project. Dallas-based Primoris Servicing Corp. will build 24 carbon capture and compression plants, Kansas-based ICM will build seven plants and Gulf Interstate Engineering, Houston, will build the pipeline.

In March, Summit announced that Continental Resources, Inc. will commit $250 million over the next two years to help fund the development and construction of the project’s associated capture, transportation and sequestration infrastructure, in addition to leveraging its operational and geologic expertise to help ensure the safe and secure storage of CO2.

“Summit and Continental have a shared vision to produce clean and cost-effective energy for all Americans. This project will be transformational for the ethanol and agriculture industries and will have a substantial economic impact across the Midwest,” said Bruce Rastetter, CEO of Summit Agricultural Group, at the time. “We have engaged with governors and leaders in all five states involved in the project and are grateful for the exceptional leadership and commitment from each to this initiative.”

The commitment is one of 31 partner ethanol facilities to deliver more than eight million metric tons per annum (MMtpa) of CO2, with initial pipeline capacity of 12.0 MMtpa, and expansion capabilities to handle up to 20.0 MMtpa.

Additionally, last month, Tiger Infrastructure Partners also invested in the carbon capture and storage project, bringing the total equity of the project to over $600 million.

At the end of the month, Summit announced an agreement with Minnkota Power Cooperative in North Dakota to more quickly, efficiently and cost-effectively advance both their projects to commercial operations. Minnkota has focused on Project Tundra, which aims to install innovative carbon capture technologies at the Milton R. Young Station in North Dakota.

“If our nation is to stay competitive during the energy transition, it will require multiple states and industries working together. Our hope is that this effort can serve as a blueprint for the collaborative thinking that is needed to drive energy innovation forward.”

“Summit Carbon Solutions is thrilled to team with Minnkota to accelerate our project and the decarbonization of biofuels and agriculture, which will greatly enhance the economic sustainability of those industries for decades to come,” added Wade Boeshans, Executive Vice President of Summit Carbon Solutions.

“Working together, Summit Carbon Solutions and Minnkota will permanently and safely sequester tens of millions of tons of carbon dioxide every year, which will improve environmental outcomes while supporting industries critical to our region’s future.”

The second project proposal came from Navigator Energy Services from Dallas, which operates 13 ethanol plants along with petrochemicals, in partnership with investment firm BlackRock Real Assets. Its pipeline, Heartland Greenway, is projected cost about $2 billion.

The 1,200-mile pipeline system would reportedly store up to 5 million metric tons of CO2 per year, transporting the liquified CO2 through a 6-inch to 24-inch pipe. Running through Iowa, Nebraska, South Dakota, Minnesota and Illinois, the central sequestration plant reside in south-central Illinois.

Navigator reports that the project will include five injection wells and 15 monitoring wells and could be expanded to 8 million metric tons per year.

No permit has been submitted for the project yet, but a project overview was submitted in October. The company told ENR it plans to file for state and federal permits in late summer to early fall, but would not give more detailed information on the project or engineering and construction contract awards.

Archer Daniel Midlands and Wolf Carbon Solutions proposed the third recent carbon capture pipeline, a 350-mile trunk pipeline designed to support 12 million tons of CO2 a year from ADM’s ethanol and cogeneration plants in Iowa to its sequestration site in Illinois. A permit has not yet been filed to the state and plans have not been made available.