A bridge constructed with a new bio-composite material composed of flax and a special bio-resin opened in Europe last month, the first of three in the “Smart Circular Bridge” EU project. The bridge opened April 22 at the Floriade international horticulture exhibition in Almere, the Netherlands.

According to the release, the project was developed by an international consortium of 15 partners led by Eindhoven University of Technology (TU/e) in the Netherlands, and includes five universities, seven innovative companies and three municipalities.

In 2016, the world’s first “biobridge,” a span built to test and exhibit the potential of building with more environmentally friendly construction materials opened on TU/e’s campus. The 14-meter-long footbridge made entirely out of biocomposite materials—specifically fibers of hemp and flax—opened to the public on Oct. 27.

To develop the biocomposite building materials, hemp and flax fibers were attached to a biological polylactic acid foam (PLA) core, said to be an environmentally friendly replacement for polystyrene, the university explained. Next, a vacuum was used to suck a bioresin into the fiber layers and create the biocomposite. The final result, when hardened, is a very strong girder, it added. 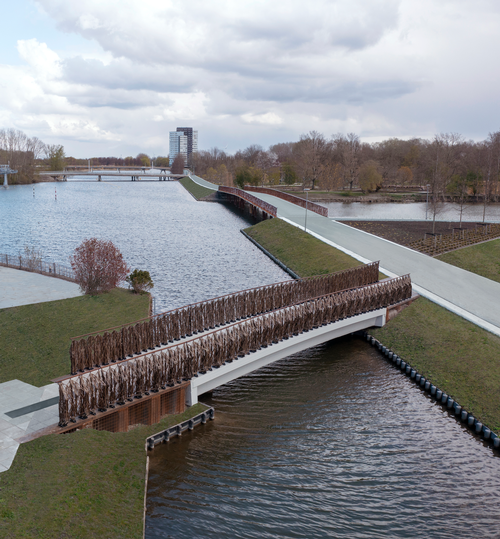 The “biobridge” was intended to remain there for pedestrian use for one year, with 28 sensors in place to measure strain and any bending that occurs from use under real-world conditions. The team was also be able to see data related to temperature, moisture and UV light exposure in real time.

“I remember that bridge with great fondness,” recalled Rijk Blok of the Department of Built Environment at TU/e. “It was an exciting time for all involved in the project, and a great way to explore the possibility of making structures with bio-composite materials.

“Biocomposites hold enormous potential for a bio-based circular economy, especially since flax, unlike wood for example, is a fast-growing plant. They also offer a great opportunity for the construction industry, which has a huge CO2 footprint and immense consumption of resources, both of which need to be addressed.”

Since then, the research team has been working on the EU “Smart Circular Bridge” project, with the timeline stretching from 2019 to 2023. The total budget of the project is 6.86 million euros (about $7.2 million), with 3.93 million euros from EU funding.

According to the project’s website, Dutch municipalities maintain over 12,000 pedestrian and cyclist bridges, with 41% in poor to very bad shape. Germany reportedly shows similar figures. Within this area, a 0.5% replacement per year of these bridges equals 95,000 tons of raw material use alone.

Alternative materials are worth considering, the project explains, as tens of thousands of these bridges have to be replaced in Europe over the coming years. Using end-of-life options offers the circular nature of the project.

The EU’s action plan Bio-Economy Strategy stresses the need for a shift towards natural materials. However, the project team reports that, despite an increase in market demand, the construction industry remains hesitant to implement these new natural materials due to a lack of research to guarantee safe, long-term use.

The team then set out to use Structural Health Monitoring, sensor technology combined with smart computer algorithms, to evaluate material behavior in real time. This can repotedly guarantee structural safety and significantly accelerate resource efficiency in infrastructure.

“We are looking at three ways of recycling materials: mechanical (shredding parts and reuse them in new products), chemical (using pyrolysis to break down larger molecules into smaller molecules), and biological recycling with fungi,” said Patrick Teuffel from TU Eindhoven, the lead partner in the international Smart Circular Bridge consortium.

“It is important that the materials service life lasts as long as possible. To achieve this, the end-of-life options are taken into account right from the start of project.”

This circular method, using natural fibers, end of life solutions and structural health monitoring, is expected to reduce up to 677,000 tons of raw fossil material every year in the EU, utilizing the “reduce, reuse and recycle” principles.

The bio-resin consists of 100% natural flax fibers, also using also many non-fossil source as much as possible. According to the release, this is achieved by using waste products from bio-diesel production and recycled PET bottles.

Biocomposites reportedly offer a great opportunity to decrease the construction industry's CO2 footprint, with materials such as flax, unlike wood, is a fast-growing plant. Combined with the bio-resin, the team reports that it can be made into a light and highly stable material with properties comparable to aluminum or steel.

A vacuum-infusion method combined with internal foam shapes and external moulds is used to construct the bridge. In the previous experimental bridge at the TU/e campus, the researchers say that the biodegradable foam PLA core, acted as a lost mold and realized the changing shape over the length of the bridge.

The first “Smart Circular Bridge” spans 15 meters (about 49 feet) and connects two parts of the horticulture exhibition in Almere. The proportion of bio-resin is reportedly 25%, with the next bridges expected to reach 60% or more.

The Structural Health Monitoring system includes almost 100 sensors within the bridge to provide data on the material’s behavior in everyday use. The optical glass fiber sensors in the bridge provide information on material strains, and acceleration sensors detect even the finest vibrations caused by wind.

Artificial intelligence then evaluates the data from these sensors to recognize patterns, while engineers refine the calculation and material models with the data. The team reports that they can then further develop materials and designs for the next bridges and other applications.

“The sensors will allow us to monitor the performance of the material in specific situations,” said Blok. “For example, how does the bridge behave when 200 people walk across it at the same time? Or what happens during different seasons of the year and different weather conditions?”

This data can also be viewed in real time on the website’s dashboard.

Currently, the team says that it is researching columns and façade elements. Additionally, they are looking at possibilities for use in rotor blades for wind turbines.

“These materials have a great future," Blok said to describe the mood of optimism after the project's halfway point. "In particular, the intensive cooperation between science, industry, and communities has given a big push to materials development.”

“The current results make us optimistic: we expect to build bridges with significantly larger spans and higher loads in the future,” added Teuffel.

Two more “Smart Circular Bridges” for pedestrians and cyclists are expected to be built in Ulm, Germany, and Bergen op Zoom, the Netherlands, in 2022 and 2023, respectively.