Global chemical company BASF recently announced that it will be partnering with Swedish multinational power company Vattenfall for the offshore wind farm tender of Hollandse Kust West in the Netherlands. Vattenfall will participate in the tender for Sites VI and VII and partner with BASF for Site VI.

According to the companies, the offshore wind farm would help Vattenfall achieve its sustainability goal to create fossil-free living within one generation and BASF’s goal to reach net zero CO2 emissions by 2050.

Hollandse Kust West Wind Farm Zone (HKWWFZ) is located approximately 53 kilometers (32.9 miles) off the west coast of the Netherlands. There are two sites designated within the area, Site VI and Site VII, that cover a total surface area of about 176 square kilometers.

Tenders for permits on both sites opened April 14 and were issued by the Dutch government’s Ministry of Economic Affairs and Climate Policy. Transmission system operator TenneT will reportedly construct two offshore platforms with two grid connections within the HKWWFZ. 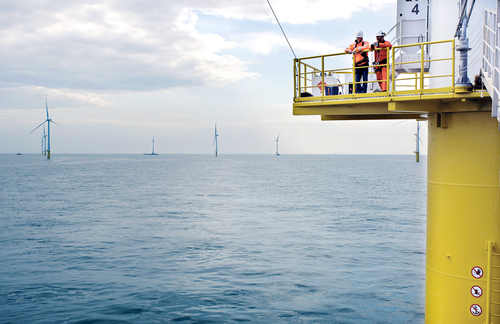 Vattenfall
Global chemical company BASF recently announced that it will be partnering with Swedish multinational power company Vattenfall for the offshore wind farm tender of Hollandse Kust West in the Netherlands.

To win the tender for Site VI, the bidding parties have to include ecological measures in their concept. Site VII requires investments and innovations which are beneficial for the Dutch Energy System.

The wind farm is one of several being developed by the Dutch government, with all wind farms anticipated to be fully operational by 2030. Tenders will close at 5 p.m. (CEST) on May 12, and winners are expected to be announced this summer.

According to the release, Vattenfall is one of Europe’s leading offshore developers, having already developed and operated 15 offshore wind farms. Vattenfall targets net zero by 2040, using Science Based Targets to help keep global warming at a maximum of 1.5 C and aim for Net Positive Impact on Biodiversity by 2030.

BASF’s goal is to reduce its greenhouse gas emissions by 25% by the year 2030 and has net-zero emissions as a target from 2050, partly from investing in renewable power generation facilities. BASF expects that offshore wind farms could provide the power capacity for this goal, and that by 2030 100% of its 2021 global power demand for its projects will be from renewable sources.

“We are pleased to see the Dutch government’s decision to continue its successful approach to offshore wind roll-out and award sites in a tender based on qualitative criteria, this time focusing on ecology and system integration,” said Helene Biström, head of BA Wind at Vattenfall. “This approach pushes developers to deliver their very best proposals, stimulates innovation and sees the Netherlands taking the lead in offshore wind development, which benefits the energy transition and society as a whole.

“Vattenfall has a strong presence in the Dutch market and is committed to take a leading role in the green transformation of the Dutch economy. Hollandse Kust West is an important next step towards our ambition to create fossil-free living within one generation.”

“With a joint bid for Hollandse Kust West Site VI, we are now taking this partnership one step further and BASF is participating at the earliest possible stage in a project that combines our need for additional amounts of renewable energy with ecological aspects in the marine area.”

Additionally, Vattenfall notes that the HKWWFZ fits within the company’s North Sea wind farm pipeline and could easily be incorporated into current procurement and execution strategies. In addition to the new tender, Vattenfall and BASF are currently building Hollandse Kust Zuid, which is the world’s first subsidy-free offshore wind farm in the Dutch North Sea.

“We leverage our strengths as a leading offshore wind developer and industrial player, both deeply committed to sustainability and biodiversity preservation, to develop an ecologically beneficial project,” said Dr. Eva Philipp, head of the Environment & Sustainability Unit at Vattenfall. “We believe that offshore wind growth needs to be developed in co-existence with nature and society to facilitate a sustainable future.