Iowa legislators have recently passed a bill in both houses that aims to provide an alternative delivery method for commercial and most public construction projects in the state. The approval arrived after several amendments were made to the legislation.

If signed by Governor Kim Reynolds, the state would adopt construction manager at-risk delivery and procurement and would also end the use of design-build on work at public universities.

Currently, Iowa and North Dakota are the only two states in the country that bar a design-build method for public projects. The statute requires that any construction project in the state involving public money must use a design-bid-build contract.

The legislation, Senate Bill 183, would open commercial construction and most public projects in the state to the construction manager at-risk delivery and procurement method. After several amendments, legislators have sent what they believe is “best for the project and the taxpayer” to the desk of Gov. Reynolds.

According to reports, there are major differences between the two methods. While construction manager at-risk is considered a traditional design-bid-build approach, the process leverages collaboration between architect and constructor used in design-build.

In addition to changing current delivery and procurement methods, the legislation also seeks to halt the use of design-build contracts on public university projects and prohibits government entities from using fee-based selection of an architect, landscape architect or engineer for a public improvement project. The bill also specifies that the approach would only affect vertical infrastructure and not highway work. 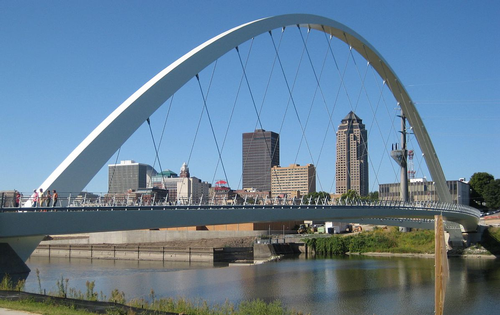 BarbaraLN, CC-BY-SA-2.0, via Wikimedia Commons
Iowa legislators have recently passed a bill in both houses that aims to provide an alternative delivery method for commercial and most public construction projects in the state.

The bill is reportedly supported by the Iowa Associated General Contractors and the Master Builders of Iowa—both of whom have long-opposed design-build in the state.

“Currently, Iowa law does not authorize design-build procurement for any level of government," says Scott Newhard, AGC of Iowa's Vice President for Public Affairs. “The regents' institutions on their own decided to do design-build without legislative authority.

“The legislature now has made it clear to the regents that they must stop this. If they wish to use CM at-risk as an alternative to design-bid-build, they may do so.”

Gov. Reynolds has not provided any comment on the matter and has 30 days from the end of the ongoing legislative session to act. If passed, the legislation would go into effect on July. 1.

The Illinois House of Representatives recently approved legislation that would allow the Illinois Department of Transportation to streamline infrastructure projects. The Innovations for Transportation Infrastructure Act authorizes IDOT and the Tollway Authority to use a design-build method for highway construction projects to expedite processes.

Passed by the state’s Senate in February with bipartisan support, the bill was reportedly passed in the House on a unanimous vote and now goes to the governor to sign.

Previously, IDOT used a design-bid-build project delivery method where the department designs a plan in-house, then reviews bids from contractors. With the new process, a single entity would both design and start construction of the project.

According to Senate Bill 2981, projects using this method would be capped at a combined total of $400 million. Additionally, the Act authorizes IDOT and the Tollway to use the construction manager-general contractor delivery method on up to two projects per year.

Using this process, IDOT would contract with single entity to serve as the construction manager for the design phase, then agree on a price to serve as general contractor for construction. The bill also requires both agencies to ensure the full inclusion of minority- and women-owned businesses by creating a liaison for the Disadvantaged Business Enterprise Program.

Years earlier, former New York Gov. Andrew Cuomo ended 2019 with the signing of the New York City Public Work Investment Act, which authorized some city agencies to use the design-build method for projects.

Other projects, such as renovations to cultural institutions and libraries and security improvements—of at least $1.2 million—can also utilize design-build.

While the law took effect immediately, each entity that has issued a design-build contract will have to submit an annual report that includes a description of the contract, the bidding process, costs, how much money was saved by using design-build and how much of the contract went to minority- and women-owned businesses.

At the time, there were nearly 50 projects lined up to use the method—saving at least $300 million. And the state already used the model for larger projects such as the $4 billion Mario M. Cuomo Bridge and the $1.5 billion expansion of the Jacob Davitz Convention Center.