Upon receiving opposition from the London Historic Parks and Gardens Trust over a Holocaust Memorial and Learning Center in the United Kingdom, the High Court has ruled to stop the project.

The Trust was joined by former archbishop of Canterbury Rowan Williams, local community groups, Jewish leaders and Holocaust survivors. According to reports, the opposition was not over the structure itself, but where it had been scheduled to be built.

The team of Adjaye (Adjaye Associates) and Ron Arad Architects was selected to design the memorial in October 2017 after the United Kington launched an international design competition that saw 92 entries. 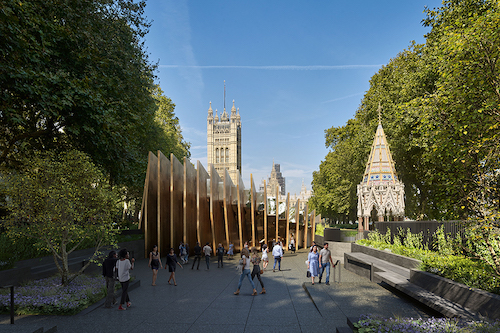 Photos: U.K. Holocaust Memorial Foundation
Upon receiving opposition from the London Historic Parks and Gardens Trust over a Holocaust Memorial and Learning Center in the United Kingdom, the High Court has ruled to stop the project.

But since then, the design has been met with strong criticism about its location, size and overall appearance. Adjaye spoke to The Times about a location critique shortly after being selected for the project, noting that there were already two memorials in the park and stressed the importance of having the monument near Parliament.

Groups opposed to the decision, including the city’s Royal Parks Authority, claimed that it would disrupt the garden.

In May 2019, design changes were made to the memorial. While the overall design with the bronze fins remained intact, a few tweaks were made to give the outer appearance some subtlety.

In August, London Mayor Sadiq Khan called on the Westminster City Council to approve the plans, which came a week after documents were uncovered that showed U.K. Holocaust Memorial Foundation co-chairs expressing misgivings about the planning process.

That decision put into motion the public inquiry, which was slated to be held and overseen by an independent planning inspector, followed by a review by the Housing Secretary, who would make the final call on the project.

Westminster City Council confirmed its position of officially opposing the Memorial in February 2020.

According to the Architect’s Journal, Housing secretary Robert Jenrick’s call-in for the application happened within a month of him meeting with U.K. Holocaust Memorial Foundation board members, sparking more thoughts on “less than impartial behavior.”

Jenrick, however, recused himself from the ruling, causing the final determination for the project to fall on then Junior Housing Minister, Christopher Pincher, the objectivity of whom was called into question.

In July the London Garden Trust applied for a review of Jenrick’s decision to allow his junior colleague, Pincher, to make the final decision on the application. Campaigners were concerned that Pincher would be able to remain neutral on the application.

However, earlier that month the High Court ruled that the government had correctly handled the case.

That October, at a public inquiry into Adjaye’s proposed U.K. Holocaust Memorial and Learning Center, the architect defended the decision to scale up the monument 23% from his original competition-winning design.

At the inquiry, Adjaye (who was named the 2021 recipient of the Royal Gold Medal) was asked why the floor area of the proposed learning center had grown from 2,650 square meters to 3,258 square meters.

Adjaye said that as the project developed it became clear that more space was needed.

“I'm not disputing that it increased in size [but in terms of giving some context] I've never worked on a project where the area [as set in the brief] is that sacred,” he said at the time. “Things grow as information is learned and that’s adjusted and reflected in the project.”

He said that he was surprised by some of the criticism and maintained that the group was excited about the concept of a memorial that was also an education center.

“I don’t know a single memorial in the whole world where that happens, and I don’t say that lightly, where you go through the memorial into a learning center, which I think is a very profound evolution of this way of understanding and memorializing education—both a memorial and a gateway to an illumination of information,” he said.

“We thought that was profound and a shift in the idea of memorials and one that made a lot of sense in the landscape. [This is what] good architects do: we rise to that challenge where we see that opportunity and we interpret it for the world that we live in.”

However, one of his critics who was there, Ruth Deech, a former governor of the BBC and a descendent of Holocaust victims, explained her objections to the project, mainly on the location.

“The decision to shoehorn this memorial and learning center into Victoria Tower Gardens means that nearly all of the objectives set out for it ... have not been met,” she said. “The alleged public benefit is in part guesswork and in part a political decision unrelated to the benefit of the victims or their descendants.”

Additional opposition to both the size and location of the memorial were also shared during the virtual session.

Since getting final approval from the Minister of State for Housing, Christopher Pincher in July 2021, the proposed Holocaust Memorial and Learning Centre in Westminster, London, is being opposed yet again.

While the location of the project has been debated for many years—slated for placement within Victoria Tower Gardens, a small triangular Grade II-listed green space next to Westminster Abbey and the Palace of Westminster—those opposing the location now claim that the memorial would “have an impact on the heritage setting, including the Buxton memorial celebrating the abolition of slavery.”

In additional arguments, the collective expressed that the planning permission decision-making process was flawed in that the proposed memorial also breaches a 1900 law, stating “a prohibition on using Victoria Tower Gardens as anything other than a garden open to the public.”

As a result of the latest opposition, Justice Thornton ruled in a U.K. Court that the project would be halted once again and refused the Government permission to appeal her judgment.

The judge highlighted that despite the proposed location dividing the parties, all those involved in the court case “support the principle of a compelling memorial to the victims of the Holocaust and all those persecuted by the Nazis during those years when, ‘humanity was tipped into the abyss of evil and depravity.’”

Construction of the project was expected to begin this year, and be completed by 2025, but will now be put on hold following an official decision. Some 75 million pounds (about $98 million) of public money has already been put towards construction costs, which was due to be supplemented by £25 million from charitable donations.

Helen Monger, Director of the Trust, said after the ruling: “This is a major boost for the protection of London parks at a time when they’ve never been more valued by the public. The High Court has given the Government a welcome chance to reflect and reconsider the best site for a fitting Holocaust memorial which the U.K. deserves, without tearing up historic protections for our parks.”

A spokesperson for the Housing Minister—a position now occupied by Stuart Andrew—said: “We note today’s judgment and will consider it carefully before deciding on next steps. It would not be appropriate comment further at this stage.”