PPG Celebrates 300 Years in the Netherlands

Global coatings company PPG announced last week that it was celebrating 300 years of operations in the Netherlands and the anniversary of its Sigma Coatings brand.

According to PPG, Sigma Coatings products are one of the leading architectural coatings brands in Europe. Celebrations marking the milestone started on April 6, which is also known as “Dutch National Painters’ Day” in the country. It was reported that PPG staff visited thousands of painters across the Netherlands to personally thank them for their work.

“We are pleased to celebrate such a proud history of paints and coatings innovation in the Netherlands,” said Justus Tichelman, PPG General Manager, Benelux Trade, Architectural Coatings. “What started with grinding pigments in a windmill is now a core part of PPG and a key contributor to our purpose of protecting and beautifying the world.” 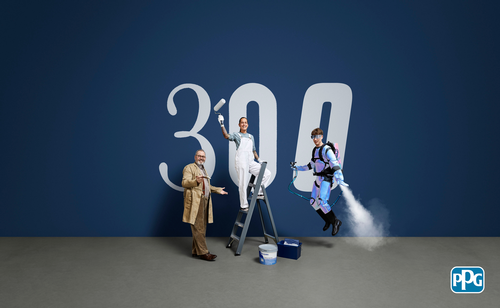 PPG
Global coatings company PPG announced last week that it was celebrating 300 years of operations in the Netherlands and the anniversary of its Sigma Coatings brand.

In 1722, Jan Pieterszoon Schoen set up a windmill in Westzaan, the Netherlands, to grind pigments for local painters. The endeavor would inspire Schoen to create the Pieter Schoen & Sons company. Sometime after the establishment, Pieter Schoen & Sons was reported to move into paint manufacturing.

“Schoen laid the foundation for a company that has truly stood the test of time,” said Tichelman. “His company was one of the first to offer pigments and dyes commercially for paint makers and evolved to become one of the first international paint companies. It thrived with a focus on continuously responding to customers’ needs and changing market conditions – something that remains a core value for PPG.”

In 1972, the company was one of three to merge and form Sigma Coatings, marking the start of the Sigma Coatings brand. The company further expanded to become SigmaKalon, which PPG acquired in 2008.

Today, PPG has six sites and 61 stores in the Netherlands and employs 1,200 people. In addition to its Sigma Coatings brand—which is available in 13 countries across Europe and the Middle East—PPG also offers Histor and Rambo.

In closing its announcement, PPG further reported that the company has long been committed to supporting communities in the Netherlands, particularly in education. Since 2014, the company has been a partner of the NEMO Science Museum in Amsterdam. Through this partnership, PPG supports projects with NEMO to make science and technology accessible to children in an easy and stimulating way.

According to the release, the R&D center will focus on innovating powder coatings product development, demonstrating powder technologies and providing customer and technical support. The facility will also serve as a European hub for cross-technology research and development, hosting laboratories for other businesses that include automotive OEM and refinish coatings.

PPG reports it is a leading supplier of powder coatings to the automotive, transportation, appliance, furniture and other markets.

Additionally, PPG recently announced that it officially entered into an agreement to acquire the powder coatings business of Arsonsisi, including a manufacturing plant in Vebania, Italy. The Milan, Italy-based company is reported to be a leading supplier of specialty powder coatings for the architectural and industrial markets.

That same month, three leadership appointments for its architectural coatings and traffic solutions businesses were reportedly to have officially gone into effect.