A ferry in Ludington, Michigan, recently received an updated paint job, which required 800 gallons of paint, during its five-year drydock inspection. The S.S. Badger, which traverses Lake Michigan to transport passengers, cargo and more, has reportedly not been coated in at least 40 years.

The vessel is the last coal-fired passenger steamship in operation in the United States and was designated as a National Historic Landmark in 2016.

In 1875, the Flint & Pere Marquette Railroad began cross-lake steamer service between Michigan and Wisconsin. It had several small, wood-hulled ships to transport railcar cargo. The first Ludington car ferry was added to the fleet in 1897.

During the “Golden Era” of car ferrying across lake Michigan in the 1950s, seven ships sailed in and out of the Ludington harbor year-round, transporting rail freight and passengers across Lake Michigan to the Wisconsin ports of Manitowoc, Milwaukee and Kewaunee. 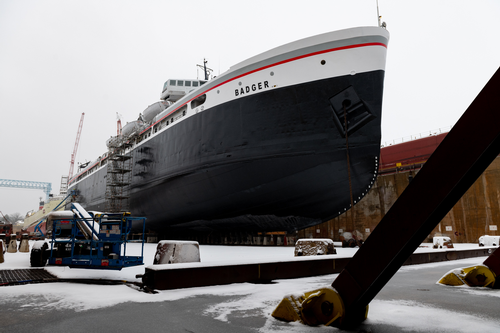 Ultimately, the railway was absorbed by Chesapeake & Ohio Railroad and continued to expand its car ferry services. The 410-foot-long S.S. Badger was built and launched in 1952, with daily service beginning in 1953, alongside its sister ship, the S.S. Spartan. They were the last and largest coal-fired, steam engine car ferries built in the U.S.

However, as the efficiency of railroad services around Lake Michigan improved, the railroad company found rail car transportation was no longer profitable. In 1980, they were granted permission by the Interstate Commerce Commission to abandon cross-lake routes. Consequently, the ferries, including the Badger, were sold to two Ludington businessmen from the Michigan-Wisconsin Transportation Company.

The company ceased operations in November 1990 and the vessels were reportedly destined to be scrapped. In 1992, however, Charles Conrad purchased the three ships and formed the Lake Michigan Carferry Service.

“Conrad knew how important the car ferries were to the local economy, and he wanted to see them sail for another hundred years,” wrote the Service. “He invested his own money to create a new life for the S.S. Badger, transporting leisure travelers, their vehicles, and commercial trucks between Ludington and Manitowoc.”

Its two Skinner Unaflow four-cylinder steam engines rated with 3,500 horsepower at 125 RPM provide the vessel with an average speed of 18 miles per hour. The ship’s propulsion system burns domestic fuel and is reportedly designated as a mechanical engineering landmark by the American Society of Mechanical Engineers.

While the vessel was originally built to transport railroad cards, it can reportedly hold up to 600 passengers and 180 vehicles, including automobiles, tour buses, RVs, motorcycles and commercial trucks.

On Nov. 3, the S.S. Badger was towed by two tugs from Sarter Marine to the Financier Bay Shipbuilding yard in Sturgeon Bay, Wisconsin. The engines had been shut off following the season ending in October, as the coal-fired steamship engines require routine maintenance in the off-season.

The trip across Lake Michigan reportedly took approximately 14 hours. The vessels departed in the evening so the ship would arrive at the shipyard in the morning hours of Nov. 4.

The Badger was originally built at the same site as the drydock shipyard, previously known as the Christy Corporation. Sam Perlman, Door County Maritime Museum Deputy Director, said “It’s a cool opportunity to see the BADGER in its home port.”

The tugboats then floated the Badger into the docks, blocks were placed and a bobber was used to help located where they lay to assist the crew with positioning. Once in place, the water was pumped out of the drydock and crews got to work.

“The SS BADGER received her standard 5-year periodic inspection, which included a visual and ultrasound inspection of her hull and underwater equipment. Anything that needed attention was addressed and corrected by the shipyard,” said Chuck Cart, Director of Operations for the BADGER.

Work included a visual and ultrasound inspection of the hull and underwater equipment, as well as repairs to a propeller. Another upgrade reportedly involved the replacement of lifeboats with rescue boats, with the changing of the davits, or small cranes on board the ship that allows for the boats to be lowered into the water.

Sara Spore, general manager of Lake Michigan Carferry, Inc. told reporters that she wasn’t sure what would happen to the old lifeboats but said previously locals have acquired one and one might also be converted into a parade float.

However, the main focus at the drydock would be on the new paint job. The repainting retained the ship’s traditional black and white with red and white stripes.

“There wasn’t a complete paint job done since the railroad owned it,” Spore said, which was more than 40 years ago. However, Spore noted that there has been touch ups had since been completed on the vessel and that certain spots didn’t match the other paint.

The entire exterior of the vessel was sandblasted down to steel prior to painting. Several layers of paint reportedly came off the ship during this process.

In total, it took 800 gallons of paint to coat the Badger. Paint under the waterline included an epoxy to help protect the hull. After the project was complete, the Badger was towed back to Ludington Harbor on Jan. 13.

“The BADGER looks as beautiful as ever and has a bright future ahead of her. We sincerely appreciate the hardworking and dedicated crew at Fincantieri Bay Shipbuilding for their time and care spent on her during this dry dock period,” wrote the Lake Michigan Carferry. “We would also like to thank our loyal fans who followed along with the process and showed their appreciation.”

The S.S. Badger is expected to return for the 2022 season in May.