The Updated Pipeline Certificate Policy Statement and Interim Greenhouse Gas Emissions Policy Statement, issued in February, are now considered drafts and are open for public comment. The drafts will reportedly not apply to pending project applications or file applications until FERC issues final guidance on the dockets.

At the end of February, FERC issued an updated policy statement describing how it will determine whether a new interstate natural gas transportation project is required by public convenience or necessity, as well as an interim policy statement to explain how it will assess the impacts of natural gas infrastructure projects on climate change in its reviews under the National Environmental Policy Act and the Natural Gas Act.

“I believe today’s long overdue policy statements are essential to ensuring the Commission’s natural gas siting decisions are reflective of all stakeholder concerns and interests,” Chairman Rich Glick said in a statement at the time.  “We have witnessed the impact on pipeline projects when federal agencies, including the Commission, fail to fulfill their statutory responsibilities assessing the potential effects of a project on the environment, landowners and communities.

“If we are going to ensure legal durability of our orders, it is essential that the Commission satisfy its statutory obligations the first time. I’m proud of these policy statements because they provide a forward-looking declaration on how the Commission intends to execute its authority to consider proposed infrastructure projects in a manner that is responsive both to all the interests at stake and to the direction of the courts.” 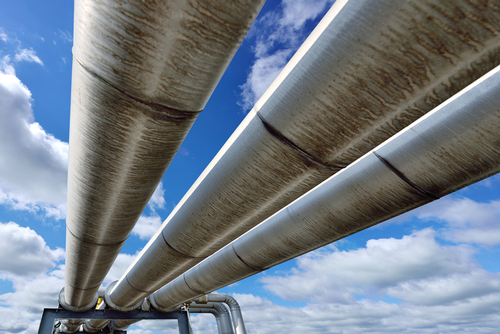 The Updated Pipeline Certificate Policy Statement provided an update of FERC’s 1999 Policy Statement on the certification of new interstate natural gas facilities, providing a more comprehensive analytical framework for FERC’s decision-making process. FERC would need to consider all factors for need on a project, including:

The Interim GHG Policy Statement set a threshold of 100,000 metric tons per year of GHG emissions, with projects under consideration with emissions above that level requiring the preparation of Environmental Impact Statements. Emissions would be based on a projection of the amount of capacity that actually will be used, the projected utilization rate and any other factors impacting the quantification of project emissions, such as construction and operation.

FERC noted, as policy statements, neither document established biding rules but were intended to explain how they would consider applications for natural gas project construction. For the Interim GHG statement, FERC was seeking comment on all aspects of the interim policy statement, including the approach to assessing the significance of the proposed project’s contribution to climate change.

However, these policies were met with criticism, including two FERC commissioners who voted against the policy changes. Mark Christie and James Danly reportedly told the Senate Energy and Natural Resources Committee at a hearing at the beginning of March that the framework create regulatory uncertainty, would drive up costs and threatened grid reliability.

The new policies "have thrown the entire process of planning, financing and applying for a natural gas pipeline certificate or approval for an LNG terminal into disarray," Danly said.

“You all took the direction from the court and applied it far more broadly than you needed to, setting in motion a process that will serve to further shut down the infrastructure we desperately need as a country and further politicize energy development in our country,” Senator Joe Manchin, Chairman of the Senate Energy and Natural Resources Committee told FERC at the hearing.

“These policies are going to make it next to impossible to build any new natural gas infrastructure or upgrade our existing facilities in the United States,” added Ranking Member John Barrasso.

FERC has now unanimously decided to take comments on the policy statements, which are now considered draft documents as of March 24. Any new review framework will reportedly not affect previous proposed projects, and any pending pipeline and LNG applications will be considered under the previous criteria established in 1999.

“The U.S. Court of Appeals for the D.C. Circuit has on several occasions, including as recently as March 11, cast significant doubt about the approach the Commission has been taking to site natural gas pipelines and LNG facilities. The policy statements were intended to provide a more legally durable framework for the Commission to consider proposed natural gas projects,” said Glick in a release.

“However, in light of concerns that the policy statements created further confusion about the Commission’s approach to the siting of natural gas projects, the Commission decided it would be helpful to gather additional comments from all interested stakeholders, including suggestions for creating greater certainty, before implementing the new policy statements.”

Comments on the draft policy statements are due by April 25, with reply comments due May 25.

“Today’s unanimous vote during FERC’s open meeting was a course-correction from their previous partisanship and I appreciate their willingness to address the significant concerns raised by many members of the Senate Energy and Natural Resources Committee. I was also pleased to see them approve three additional pipeline projects,” said Manchin in a statement.

“Energy security for America and our allies is dependent on FERC’s ability to move much needed energy infrastructure projects forward. To do so they must maintain clear and predictable policies that strike the right balance between energy security, affordability and environmental considerations. I will continue to seek a bipartisan path forward to ensure they do.”

Additionally, Amy Andryszak, President and CEO of the Interstate Natural Gas Association of America, issued a statement in response to FERC’s reconsideration of its new policy statements.

“INGAA is pleased that FERC heard the tremendous concerns expressed by natural gas customers and operators and took bipartisan, unanimous action to designate the two new certificate policy statements as draft rather than final statements, and to apply the revised policies only to project applications filed after the Commission finalizes the statements,” wrote Andryszak.