The project is slated to reach completion sometime in 2025.

According to The Tribune-Review, roughly 120 crew members and various cranes are currently onsite, working to construct the foundation for the 700,000-square-foot terminal. The project has called for the drilling of 131 caissons and the installation of shafts into bedrock under the facility as well.

“You can start to see the cranes in place as you come onto the property. And from concourse B and C, you can watch all the construction that is going on out there,” said Hoback. “It is pretty exciting to see.”

While drilling is nearly complete, crews are also working to place 25 80-foot-long, 50-ton steel girders—manufactured by Sippel Steel in Ambridge, Pennsylvania—for the main foundation. Three of the girders are expected to require brief closures of the airport’s people mover. 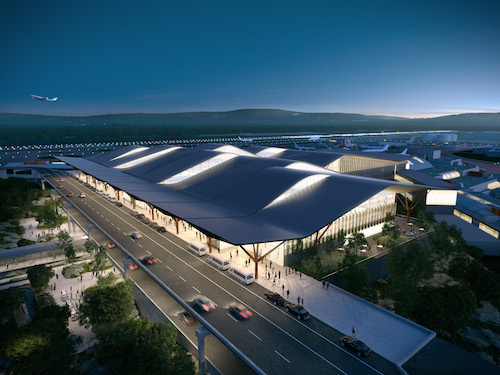 Next month, crews are scheduled to begin work on the multi-modal center to the northwest of the new terminal, which will involve the construction of new roadways, car rentals and a 3,300-space parking garage. This portion of the project is expected to utilize crushed and recycled concrete from demolition that has taken place on other parts of the revamp.

Hoback expects that a skeleton of the landside terminal will be up within the next two months, as beams are scheduled to be erected in May.

The authority announced the project, which includes a new landside terminal, new roads and a new building for baggage and security, in September 2017.

The current facility, which cost around $900 million to construct, opened in 1992 and was built as a hub for the now-defunct US Airways. At that time, the airport saw as many as 38 million passengers a year. It has steadily decreased since then, however, and current numbers indicate right around 8 million annual passengers.

While the authority looked at a few different directions to update the airport—officials had been working on this for more than two years—building a new landside terminal was actually the cheapest option, according to Allegheny County Airport Authority CEO Christina Cassotis.

The current layout features a massive landside terminal equipped with elevators, escalators and a tram system that, nearing 30 years old, are approaching costly repairs. The tram itself (an underground train that shuttles people from landside to airside) costs $3 million a year to operate, according Pittsburgh’s CBS affiliate.

The new terminal will be built in between the C and D concourses and attach to the current airside terminal, which will be updated. This will put everything basically on one level, eliminating most escalators and the tram. The “dogleg” ends of the A and B concourses will also be eliminated, leaving the number of gates open at 51, about a dozen more than what’s used today, allowing some leeway for potential growth. There is no official word on what will happen to the current landside terminal, though the authority has confirmed that it has set aside the necessary funds to demolish the structure.

The new, smaller facility is estimated to save $23 million a year in operation and maintenance costs. In addition, Cassotis said the cost per passenger would fall from an average of $12.69 to $9.73.

At the time, the terminal was estimated to cost $783.8 million, in addition to the new parking garage ($258.8 million) and new roads ($57.1 million). It was also noted that project would be paid for by the airlines, bonds, grants, and revenue from Marcellus shale gas drilling, parking and airport shops.

Officials estimate that more than 6,000 temporary design and construction jobs will be created, along with 4,500 “spin-off” jobs to support the purchases of supplies and services as well as spending wages earned by the workers.

In April 2018, the authority revealed a shortlist of design contenders, which included teams from AECOM, Corgan and Michael Baker, Gensler and HDR, and Luis Vidal + Architects/CannonDesign.

In July, multiple firms ended up with the job, as Gensler (San Francisco) entered into a joint venture with HDR (Omaha) and that agreement formed an association with Luis Vidal (Madrid).

The contract with the JV is worth a reported $15 million.

According to the Pittsburgh Post-Gazette, the JV is responsible for overseeing the construction of the new landside building, roads and bridges, and the baggage handling system as well as any required utility relocations. Turner will oversee the construction of a $258.8 million parking garage of 3,000 spaces, surface lots, a new ground transportation center and rental car facilities.

The design concept for the terminal modernization program was revealed in February 2019 and officials said that they pulled from “the rolling hills and rivers, neighborhoods and communities and new economic diversity that has led to Pittsburgh’s re-emergence over the past few decades.”

Based on the idea of combining nature, philosophy and community, the design features high ceilings and large windows, which will equip the facility with greenery and natural light.

While subject to change, the concept design currently includes:

In April 2020, the then-$1.1 billion airport overhaul was placed on hold indefinitely in wake of the COVID-19 pandemic. Cassotis said at the time that while the pause in the project arrived as one of the worst economic tolls that the airline industry has ever seen, it did present an opportunity to consider how the airport should be designed in a post-pandemic world.

Suggestions of plexiglass at ticket counters, floor markings that encourage people to stay six feet apart and more-visible cleaning efforts were all ideas that the airport was looking at. Officials were also planning to form a public health advisory committee to study the issues further.

After nearly a year, in February 2021, the Pittsburgh International Airport released a statement saying that crews were ready to move forward with the next phase of the Terminal Modernization Program.

True to the delay’s notice, Cassotis said that the management and design teams worked the project, and new design and construction documents were 90% done and were planned to be finalized that month. The changes added public health to the airport’s dual imperatives of safety/security and air service.

Also at that time, PIT was in the processing of securing agreements with airlines to start back up with $182 million work of work that included bid packages for structural steel in March, foundations in April, and underground utilities in May, as well as other work.

In June 2021, $130.7 million in contracts for the Pittsburgh International Airport’s proposed $1.4 billion modernization plan were approved by the Allegheny County Airport Authority.

At the same meeting in which the contracts were approved, Cassotis reported a 495.6% increase in passenger traffic year over year for the month of May. The modernization construction is aiming to commence in the fall, though a long-term agreement with the airlines has yet to be reached.

The following month, it was reported that PIT went live with its microgrid, which powers the entire facility with natural gas and solar energy. Billed as “a first of its kind,” the power generated by the microgrid serves as the airport’s primary supply, but continues to stay connected to the traditional grid as a backup.