The World Green Building Council (WorldGBC) has recently announced the launch of its Sustainable Reconstruction & Recovery Framework, which will serve communities as a “post-disaster toolkit” when building back better throughout the Southern and Eastern Mediterranean regions, and beyond.

The Framework was developed by the WorldGBC, the European Bank for Reconstruction and Development (EBRD), UN Habitat and Green Building Councils in Egypt, Jordan, Lebanon and Palestine. The toolkit reportedly builds upon the body of existing WorldGBC frameworks for Health and Wellbeing and Whole Life Carbon, as well as EBRD’s Environmental and Social Policies and corresponding Performance Requirements.

“Recommendations are applicable to other neighboring regions such as MENA and Sub-Saharan Africa. The Framework incorporates the EBRD Environmental and Social Policy and its Performance Requirements, and will leverage the broad WorldGBC network for outreach and capacity building.”

Structured around six themes that emphasize disaster risk reduction, the toolkit also focuses on sustainable urban reconstruction of the physical environment, the restoration of communities and how social and cultural life can be supported and revitalized. 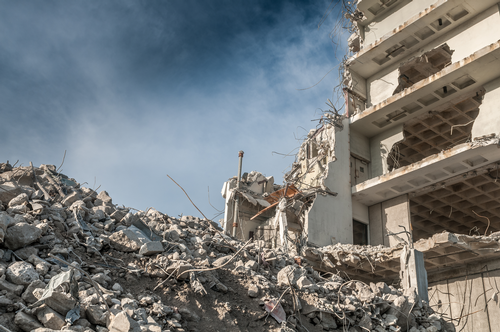 CHUYN / Getty Images
The World Green Building Council (WorldGBC) has recently announced the launch of its Sustainable Reconstruction & Recovery Framework, which will serve communities as a “post-disaster toolkit” when building back better throughout the Southern and Eastern Mediterranean regions, and beyond.

The six themes are comprised of the following:

While the Framework does not propose a “one-size-fits-all” solution, it does layout key issues and methods for best practices in the event of a disaster. From the collection of issues and themes, stakeholders—such as local communities, international and local donors, academic institutions and public entities, among others—can then couple recommended strategies through time frames across a built environment life cycle.

These are proposed as four phases, including: Assessment and Preparation; Planning and Design; Implementation & Construction; and Operation and Maintenance. Before the Framework can work effectively, creators of the document have also specified that the cessation of violence, governance and finance must be identified or else reconstruction and recovery efforts can not be carried out successfully.

“As we build momentum to the UN Climate Conference COP27, the priority must be on facilitating knowledge for an equitable transition to sustainable, low-carbon infrastructure solutions that bolster resilience for all communities and economies. The Sustainable Reconstruction and Recovery Framework is a toolkit for disaster-hit areas that does just that for all the countries located in the Southern and Eastern Mediterranean,” said Cristina Gamboa, CEO, WorldGBC.

According to WorldGBC, the reason the Framework focused on the Middle East and North Africa region, including the Southern and Eastern Mediterranean (SEMED) is because it is known to be the most water-stressed region in the world, and is heating at twice the rate of the global average.

Over the last half-century, the areas have seen more heat waves, extensive droughts, flash floods, coastal erosion and cyclones than ever recorded previously. Estimates suggest that over $560 billion will be needed across the region just to rebuild in countries like Syria, Iraq, Yemen, Libya and Gaza. After loses experienced as part of a port explosion in Lebanon, it was estimated that the country would need between $4-$5 billion, with reconstruction costs estimated around $10 billion.

“We look forward to working with our partners and Green Building Councils to accelerate the Framework’s contribution to unlocking the restoration of ecosystems, communities and economies in the region and beyond,” Gamboa added.

The Sustainable Reconstruction and Recovery Framework Alignment Checklist can be downloaded here.

An Executive Summary of the Framework can also be viewed here.

In line with its sustainable build back initiative, in November, the U.S. Green Building Council announced the results of the 2021 World Green Building Trends report, revealing an increased commitment to green building and other strategies aimed at reducing energy consumption and carbon emissions.

Created in partnership with Dodge Data, the report also shows that while green building continues to remain a global priority, its goals have been further driven by extreme events, despite rising concerns such as the COVID-19 pandemic.

More than 1,200 industry professionals— including engineers, architects/designers, contractors, owners, developers, inventors and consultants— around the world were surveyed for the report.

In its fourth edition of the study, USGBC and Dodge report that many of the key findings haven’t changed, even despite the state of upheaval. The commitment to increasing green building efforts continues to remain strong with respondents planning to use more green building products and systems.

While there are many business drivers reported to be pushing green practices, the report also noted on social factors. Interestingly, the report indicates that creating healthier buildings is not just a response to COVID-19, but is part of the ongoing commitment by green practitioners.

According to the report, the level of green building activity (all respondents) in 2021 is as follows:

Regarding environmental reasons, over three quarters of the respondents (87%) reported that all of the following were important in green building: reduction in energy consumption, lower greenhouse gas emissions, improved indoor air quality, reduction in water consumption and the protection of natural resources.

Industry professionals also reported on the financial benefits of green building. According to the report, the average reduction in operating costs for the first 12 months in a new green building is 10.5% and five-year cost savings are 16.9%. Green renovations and retrofits have even greater performance globally at 11.5% and 17%, respectively.

Other key highlights in the report included: