Researchers from the Institute for Materials Discovery at the University College London recently developed a nanocomposite-based, superhydrophobic coating to limit ice formation in industrial applications.

The study, authored by Yandbei Hou and Kwang Leong Choy, was recently published in the journal Progress in Organic Coatings.

According to the study, developing superhydrophobic or icephobic coatings is significant in limiting ice formation. The team notes that recent investigations focus on scientific research, but not practical application.

To solve this, the team designed and fabricated nanocomposite-based superhydrophobic PVDF-HFP/SiO2/CNTs coatings. These coatings reportedly exhibited “exceptional” water repellency at a contact angle up to 168 degrees and slide angle lower than 2 degrees. 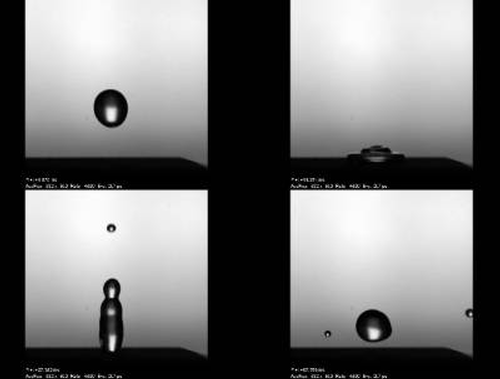 Additionally, the nanocomposite coating reportedly has “superior” deicing characteristics, with ice adhesion strength testing lower than 10kPa so that it can be detached naturally from wind or its own weight.

According to UCL’s website, the anti-icing coatings research is ongoing, with two goals in mind:

Additionally, the coating on the Al-alloy foil was easily removed from the substrate, with modification improving scratch resistance on a physically modified substrate up to 8 mN and a chemically modified substrate up to 30 mN. The team reports additionally that the optimization of the nanocomposite formulation further improved scratch resistance up to 250 mN in a current test, with no failure observed at 50 mN.

The university says that applications of these coatings could be included in aviation, naval and automotive industries and Arctic oil and gas exploration. A patent has reportedly been submitted to the U.K. Intellectual Property Office.

In November, Zentek Ltd., a Canadian development and commercialization company, announced the development of its new carbon-based, nanotechnology-enhanced icephobic coating.

The next rounds of testing will include testing the coating for sand and rain erosion. Zentek reports that it is also planning tests to evaluate the coating as part of a hybrid ice protection system alongside a heated deicing system to improve efficiency.

According to the company, these tests are already scheduled and results will be reported once they are available.

“Positive results from our ongoing icephobic testing, in laboratory as well as real-world conditions, clearly demonstrate the significant potential for graphene and other nanomaterials in advanced materials development and commercialization,” added Dubé.

“More specifically, we believe our icephobic coating can be used to enhance safety and efficiency in many ways, creating several potentially new opportunities for our company and shareholders.”

In January, a research team from the Skolkovo Institute of Science and Technology (Skoltech) in Moscow tested hydrophobic coatings and their effectiveness combined with other anti-icing systems.

Researchers at Skoltech then decided to test the surface wettability of aluminum in aircraft skin and see if it affects the performance of these fluids.

Three different types of fluids, which satisfied aerospace standards SAE AMS1424 or AMS1428, were tested. Each fluid type, including Type I, II and IV had different endurance times. Aluminum plates were sanded, polished and coated with a hydrophilic transparent, glossy or matte acrylic varnish.

In contrast to a Canadian team’s findings, they discovered that plate wettability had no impact on the performance of anti-icing fluids, but attribute this finding to the surface tension and viscosity of anti-icing fluids. Researchers also noted that surface roughness could play a role, since rough surfaces take longer to accumulate ice.

According to Skoltech, the study showed that the accumulation of liquid in the surface texture reduces the water-repellent properties of hydrophobic coatings.