This week, a team of researchers presented a new type of coating that could limit the flammability of wood used in construction at the spring meeting of the American Chemical Society.

Noted to be an environmentally friendly flame retardant, the team envisions that the coating could also be utilized for other flammable materials, such as textiles, polyurethane foam and 3D-printed parts.

ACS Spring 2022 is a hybrid meeting in that it is hosted virtually and in-person in San Diego. The event runs several days long, having launched on March 20 and is scheduled to end today, March 24. According to ACS, over the course of the event, more than 12,000 presentations on a wide range of science topics will be offered.

Department of mechanical engineering professor Jaime Grunlan led the research (partnered with researchers at KTH Royal Institute of Technology in Stockholm, Sweden, led by Lars Wagberg), which was published in Advanced Materials Interfaces, and said that successful development and implementation of the coating could provide better fire protection to different kinds of materials. 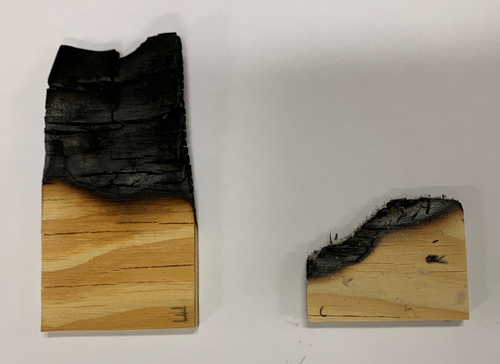 Ethan Iverson
This week, a team of researchers presented a new type of coating that could limit the flammability of wood used in construction at the spring meeting of the American Chemical Society.

“These coatings offer the opportunity to reduce the flammability of the polyurethane foam used in a variety of furniture throughout most people’s homes,” Grunlan said at the time. “The uniqueness in this current study lies in the use of two naturally occurring nanomaterials, clay nanoplatelets and cellulose nanofibrils. To the best of our knowledge, these ingredients have never been used to make a heat shielding or flame-retardant coating as a multilayer thin film deposited from water.”

Grunlan said that benefits from using this method include the coating's ability to create an oxygen barrier to plastic films and better fire protection at a lower cost than other, more toxic ingredients that are traditionally used.

To test the coating, researchers applied it to a flexible polyurethane foam exposed it to fire using a butane torch to determine the level of protection the compounds provided.

“The nanobrick wall structure of the coating reduces the temperature experienced by the underlying foam, which delays combustion,” Grunlan said. “This coating also serves to promote insulating char formation and reduces the release of fumes that feed a fire.”

The next step was to transition the method into the industry for further development.

Fast-forward a few years and now Grunlan, Ph.D. and the project’s principal investigator, alongside Thomas Kolibaba, Ph.D., who is further developing the new coating to make construction materials less flammable, are expected to present their research findings at ACS Spring 2022.

Just as in the early stages of the coating’s development, Grunlan notes that the ingredients of the fire retardant have remained environmentally benign, adding that now, they might also cost less.

According to reports, Kolibaba carried out the research as a graduate student and postdoc in Grunlan’s lab at Texas A&M University, building on polyelectrolyte coating technology invented by the group in 2009 and later extended by other researchers.

Through this method, opposing charges draw the polyelectrolyte molecules in the alternating layers together into complexes on the item’s surface, forming a coating that can extinguish a flame. However, a problem that Kolibaba found with this method was that it wasn’t feasible for wood materials because it takes too long to soak up the chemicals.

In continuing his research, Kolibaba adapted a preexisting Grunlan technique, which cut the number of steps down to two: one dip to coat the wood, followed by a dip in a different solution to cure the coating by changing the pH. However, that option still proved problematic in that the resulting material was sticky and remained inconvenient for industrial or consumer applications.

After additional modifications, Kolibaba developed a new method that the team intends to present at ACS Spring 2022.

“This type of treatment, which could be deposited via dipping, spraying or pressure treatment, could make homes much safer,” said Kolibaba. “The coating could reduce flame spread and smoke production, which could limit damage and give people more time to evacuate.”

To better protect wood surfaces, Kolibaba dipped plywood in an aqueous solution containing the positively charged polymer polyethylenimine (PEI), the monomer hydroxyethyl methacrylate phosphate (HMP) and a photoinitiator known as TPO. Then, instead of dipping the wood in a second solution, he exposed it to ultraviolet light, causing the TPO to turn the HMP into a negatively charged polymer, which then formed a polyelectrolyte complex with PEI.

As a result, a transparent coating was left on the wood surface only a few micrometers thick. In testing the material, the treated wood reportedly lowered the amount of heat released during burning and quickly formed a surface layer of char that protected the underlying wood.

“It also reduced smoke production by 56%, an unusually large degree,” added Kolibaba. Thanks to this attribute, Grunlan expects that the coating will also be water-resistant, meaning that in addition to limiting fire damage and spread, it could also serve as a water-repellent and antifungal coating.

The researchers acknowledge support and funding from Texas A&M.