According to a recent interview with global paint and coatings manufacturer AkzoNobel’s Chief Executive Officer, Thierry Vanlancker, the company is expected to cease operations at its four plants in Russia.

In an updated press release, the company noted that its business in Ukraine and Russia is limited, representing about 2% (roughly 200 million euros or $219 million) of AkzoNobel’s total income of 9.6 billion euros in 2021. The company announced its fourth quarter and full-year earnings in February.

“We are pretty realistic that over a month, two-month period this will come to a gradual, if not normal phasing out of the business,” said Vanlancker on AkzoNobel's Russian operations.

While AkzoNobel’s products for retail and industrial clients in Russia don’t fall under any sanctions regime, spokeswoman Diana Abrahams noted that the company’s supply chain was being affected by the impact of the war in Ukraine and sanctions imposed by other Western countries.

“... it is clear that even products that are not sanctioned are and will be hit. The whole chain from supplies to customers is disrupted,” she added in an interview with The Financial Times, noting that the company continues to fully comply with all measures and sanctions that have been put into place. 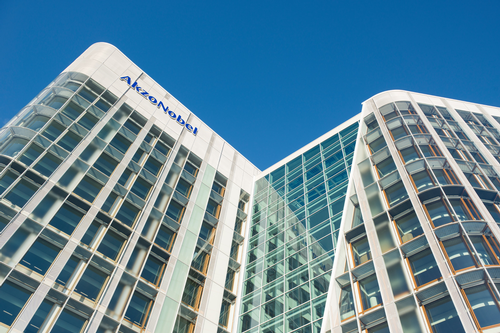 AkzoNobel
According to a recent interview with global paint and coatings manufacturer AkzoNobel’s Chief Executive Officer, Thierry Vanlancker, the company is expected to cease operations at its four plants in Russia.

While the company continues to closely monitor the situation, it reports that it is in contact with its 17 colleagues located in Ukraine and the 640 colleagues in Russia.

“Now, as always, the highest priority for us is the safety and well-being of our employees. We are in contact with our people and offering as much support as possible to all those affected, in order to keep them and their families safe,” wrote the company. “In difficult times like this, it’s important that we work together, help each other and remain strong as one AkzoNobel – regardless of nationality or background.”

The company reports that it will be continually evaluating the situation daily, although it would appear that continuing business is proving to be more and more difficult.

In a closing statement, AkzoNobel wrote, “We will continue to provide all our employees with whatever we can to support them in these difficult times, as safety, integrity and sustainability are the core values of AkzoNobel. We are also setting up a donation platform for our employees to raise money for humanitarian support in Ukraine. AkzoNobel will add three euros for every euro donated by employees.”

While AkzoNobel predicts that its four manufacturing plants in Russia will close within the next several months, the company reported at the beginning of the month that it had officially opened a new 10-million-euro global research and development center at its Slough site in the United Kingdom.

The facility—home to 120 specialists—is slated to act as a major hub within the company’s worldwide R&D network and help to further advance AkzoNobel’s innovation capabilities, especially in the area of decorative paints.

“The inauguration of this fantastic new center will help us to continue our long tradition of pioneering new products and developing more sustainable solutions for our customers through ground-breaking innovations,” said Vanlancker, who attended the center’s official opening.

“As well as marking the start of a new chapter in the U.K., it’s also a clear signal of our ongoing commitment to keep pushing boundaries as part of our People. Planet. Paint. approach to making a genuine and lasting difference to customers, communities and the world around us.”

The opening of the Slough facility follows on from the 2019 U.K. launch of AkzoNobel’s R&D Innovation Campus in Felling, England. The 12.6-million-euro (roughly $14.1 million) R&D campus interweaves the site’s 115-year history with product development, and also has facilities geared toward coatings research.

In another recent emailed press release, AkzoNobel announced plans to invest in the expansion of in-house resin manufacturing. According to the company, the expansion is expected to help build resilience against supply disruptions and act as part of the company’s Grow and Deliver strategy.

Already reportedly underway, the scale-up program will also contribute to achieving the company’s financial and Scope 3 (upstream) carbon reduction ambitions. AkzoNobel also notes that it is in line with its “People. Planet. Paint.” Approach.

AkzoNobel reports that the plan, which was developed after an internal resins team investigated opportunities to add value and make the company more self-sufficient, includes investing in sites, equipment and people to optimally run them.

Invasion Effects on the Industry

As the Russian invasion of Ukraine continues to run its course, several reports have indicated how the ongoings have negatively affected construction projects in both countries, in addition to further threatening global recovery from inflation and supply chain issues.

In a Data Digest released at the end of February, Associated General Contractors of America’s Chief Economist Ken Simonson wrote, “The war in Ukraine and the West’s response are likely to have multiple effects on construction materials costs and availability.” While the immediate impact will be on fuel and gasoline, Simonson predicts that prices of copper and aluminum will also increase as a response to halted and delayed cargo ships.

In a report by Fortune, Polish property developers have estimated that between 20% and 30% of Ukrainian workers left construction sites since the invasion began. Thus far, more than a million people have left the country, while smaller groups are returning to join the military or territorial defense forces.

While there has not been much reported about Russia’s ongoing construction projects, some architects have reported that they will be halting work in the country. At the beginning of the month, British architecture firms David Chipperfield Architects and Zaha Hadid Architects suspended their work as a result of the ongoing invasion.

Around the same time, Dutch studio MVRDV also announced that it would be stopping work at five of its projects in Russia.

The Royal Institute of British Architects has also commented, stating: “Our thoughts are with all those affected by the Russian invasion of Ukraine, which has exposed the horrific effects of conflict on communities, and put the role that architecture plays in building resilient, collaborative and inclusive societies into sharp relief.”

From within the country, 6,500 Russian architects have signed an open letter condemning the invasion.