For the month of February, the construction industry reportedly witnessed a 40-year high in terms of growth rates in both nonsupervisory positions and wage increases. 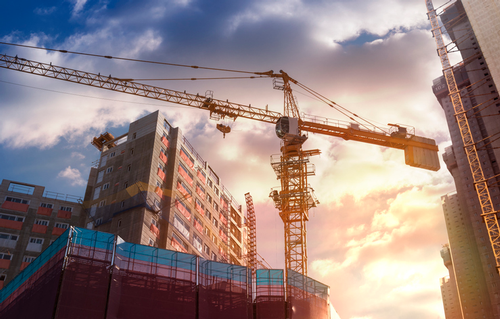 JONGHO SHIN / Getty Images
For the month of February, the construction industry reportedly witnessed a 40-year high in terms of growth rates in both nonsupervisory positions and wage increases.

“All segments of construction added workers in February,” said Ken Simonson, Chief Economist for the Associated General Contractors of America. “However, filling positions remains a struggle, as pay is rising even faster in other sectors.”

In a recent report by Business Insider, construction wages are up 6% higher than this time last year, further intensifying competition. According to AGC, the industry average of $31.62 per hour for such workers exceeded the private sector average by 17%, while the average for the entire private sector climbed even more in February—6.7% year-over-year.

Simonson notes that the year-over-year jump is the largest 12-month increase since December 1982 and primarily affects “production and nonsupervisory employees.”

“Bottom line: The U.S. economy is charging into the post-pandemic world with significant momentum, and nonresidential construction is part of that story,” said Associated Builders and Contractors Chief Economist, Anirban Basu. “At the heart of America’s economic momentum is rapid workforce growth, with more people re-entering the workforce to take advantage of higher wages and to better contend with rapidly rising prices.

“Evidence indicates that contractors have had a somewhat easier time filling available positions recently,” said Basu. “There are also indications that supply chain issues have improved slightly, though the Ukraine/Russia war may create new issues on that front. With demand strong and the supply side of the economy in repair, 2022 is setting up to be a strong year for contractors.”

Regardless of what appear to be positive outlooks, industry officials report that the progress is not enough, as the construction sectors will still need hundreds of thousands of additional experienced workers over the next several years to complete Bipartisan Infrastructure-funded projects, in addition to satisfying the continued demand for homebuilding and private nonresidential structures.

“Construction firms are doing all they can to add employees and pay them well,” added Stephen E. Sandherr, AGC Chief Executive Officer. “But there are not likely to be enough workers to meet demand unless officials in Washington act now to prepare more jobseekers for these opportunities.”

In January, the AGC reported that in an analysis of government data that increased prices of construction materials are outpacing the rate at which contractors are raising their bid prices.

According to AGC, the producer price index for inputs to new nonresidential construction—the prices charged by goods producers and service providers such as distributors and transportation firms—jumped 0.9% in November and 22.1% over 12 months.

In turn, Simonson reported that the increases stunted the rise in the index for new nonresidential construction—a measure of what contractors say they would charge to erect five types of nonresidential buildings—climbing just 0.3% for the month and 12.4% from a year ago.

Looking at specific products, AGC also found that steel mill products more than doubled, soaring 141.6% since November 2020, while aluminum nearly doubled as well, increasing by 41.1% over the 12-month period.

Copper and brass also showed an increase of 37.8%, plastic construction products increased 32.5% and the price for gypsum products rose 20.9%. Architectural coatings also revealed an increase of 12.4% and the index for lumber and plywood rose 12.2%.

More recently, last month, the U.S. Bureau of Labor Statistics reports that the PPI for final demand increased 1% in January, seasonally adjusted. The rise followed advances of 0.4% in December 2021 and 0.9% in November. On an unadjusted basis, final demand prices moved up 9.7% for the 12 months ended January 2022.