New York City officials recently announced that the South Brooklyn Marine Terminal will be turned into an offshore wind port facility, acting as an operations and maintenance base for the Empire Wind and Beacon offshore wind farms.

Last week, Mayor Eric Adams announced at a press conference that the agreement was signed between the New York City Economic Development Corporation, developer Equinor Wind, BP and Sustainable South Brooklyn Marine Terminal. The facility will reportedly be one of the largest offshore wind ports in the nation.

“With this investment, the South Brooklyn Marine Terminal will soon be transformed into one of the largest offshore wind port facilities in the nation,” said Adams. “This site will be the launch of a whole new industry for New York City that will support 13,000 local jobs over time, generate $1.3 billion in average annual investment citywide, and significantly reduce our carbon footprint so that we can meet our climate goals of 100 percent clean electricity by 2040.

“This is a transformative moment for New York City and our clean energy future — a future of sustainable power, good-paying jobs, and climate justice.” 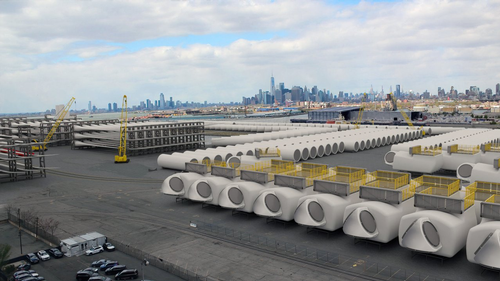 Equinor
New York City officials recently announced that the South Brooklyn Marine Terminal will be turned into an offshore wind port facility, acting as an operations and maintenance base for the Empire Wind and Beacon offshore wind farms.

According to the city’s release, as part of the deal, the terminal will become a power interconnection site for the Empire Wind 1 project, with heavy lift platforms planned to be built on the 39th Street Pier for wind turbine staging and installation for the teams.

Additionally, 30% of subcontractors hired for the port project will be from minority- and women-owned business contractors based in and registered with the city or state as part of the agreement. 1,000 jobs will be supported at SBMT, with 13,000 jobs planned in the wind farm sector overall.

Equinor plans to spend between $200-$250 million in infrastructure upgrades at SBMT, while also ensuring that it will be a low-emissions facility. The company reports that at about 73.1 acres, SBMT is the only industrial waterfront site in the area with the capacity to accommodate wind turbine generator staging and assembly activities at the scale required by component manufacturers.

The retrofit for the SBMT is part of the 15-year Offshore Wind Vision plan announced in fall 2021 to make New York City a major hub for offshore wind, including infrastructure to support manufacturing, staging and installation, operations and maintenance and transmission. Overall, the city plans to spend $191 million to reduce 34.5 million tons of carbon dioxide, reach 100% clean energy by 2040 and carbon neutrality by 2050.

New York Governor Kathy Hochul announced the finalized contracts for Equinor and BP in January, including a public and private funding commitment of $644 million in port infrastructure, of which more than $287 million will go towards SMBT.

In December last year, the U.S. Department of Transportation awarded a $24 million grant through the federal Maritime Administration’s 2021 Port Infrastructure Development Grants to use for the “SBMT 35th Street Pier Expansion Project.” This project is expected to increase cargo capacity and operational efficiencies for SBMT to serve the offshore wind farms.

In January, New York’s first offshore wind farm, South Fork Wind, received the final approval needed for the project to move forward with the start of construction. The project’s Construction and Operations Plan (COP) was approved by the U.S. Department of the Interior’s Bureau of Ocean Energy Management, following the DOI’s Record of Decision in November and a BOEM environmental review.

The COP outlined the project’s one nautical mile turbine spacing, requirements on the construction methodology for the work occurring in federal waters and mitigation measures to protect marine habitats and species.

“This milestone underscores the tremendous opportunity we have to create a new industry from the ground up to drive our green energy economy, deliver clean power to millions of homes and create good jobs across the state,” said New York Governor Kathy Hochul. “As we tackle climate change head on and transition to a clean economy, these are the projects that will power our future.”

According to the release, the wind farm is expected to kickstart New York’s offshore wind industry and power approximately 70,000 homes with clean, offshore wind energy by 2023.

In November, the DOI announced that it approved the construction and operations of offshore wind joint development partners Ørsted and Eversource’s South Fork Wind project, the Department’s second approval of a commercial-scale, offshore wind energy project in the United States.

The ROD approved the 130-megawatt project’s plan to install 12 or fewer turbines about 19 miles southeast of Block Island, Rhode Island, and 35 miles east of Montauk Point, New York. The DOI reports that, prior to construction, South Fork Wind must also submit a facility design report and a fabrication and installation report for construction and operations.

The substation will be designed and constructed by offshore fabricator Kiewit Offshore Services, Ltd. Kiewit is reportedly the first American contractor to fabricate a wind farm’s offshore substation.

Once in operation, the substation will collect the power produced by wind turbines and connect the clean energy to the grid.

Throughout the design and construction phases of the projects, Kiewit reports that it will be employing more than 350 fabrication workers from Ingleside, Houston and Kansas. In addition, the company plans to hire hundreds of union workers in the Northeast to support the project, as well as other initiatives in the region.

Construction on the substation was slated to begin in November, with a competition date eyed for spring 2023. Then, crews intend to transport the substation across the Gulf of Mexico and up the East Coast for installation at the South Fork Wind site in the summer of 2023.

According to reports, Ørsted and Eversource expect onshore work to begin by early February. Site preparation and onshore activities for the project’s underground duct bank system and interconnection facility will reportedly be the first to begin.

Offshore installation of the monopile foundations and wind turbines is expected to begin in summer 2023.