Construction is in progress for a long rail mill supported by Evraz North America’s Bighorn Solar Project, set to be the world’s first steel mill to run almost entirely on solar energy. Located in Pueblo, Colorado, the $285 million private investment for the solar farm will reportedly abate more than 433,000 metric tons of carbon dioxide emissions per year, which is the equivalent of removing 92,100 cars from the road.

In 2019, Xcel Energy, Evraz North America and Lightsource BP announced that they had formed a long-term partnership to develop the 300-megawatt solar farm to power the Evraz Rocky Mountain Steel mill facility.

Lightsource is reportedly financing and building the $285 million solar array and will sell the electricity generated to Xcel, Colorado’s largest utility, under a 20-year purchasing agreement until 2041. The solar array will contribute to the Colorado Energy Plan’s goal of providing 55% renewable energy by 2026 and reducing carbon emissions by 60%.

“If you were wondering what a renewable energy future would look like, this is a great example,” said Colorado Governor Jared Polis, speaking at the project announcement press conference. 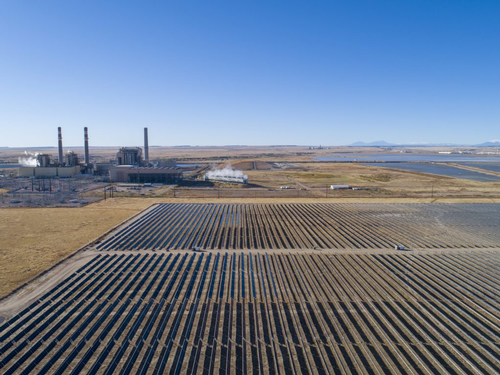 The Bighorn Solar Project was dedicated in October last year, including more than 750,000 solar panels built on 1,800 acres of land at the steel mill property. This size also reportedly makes it the largest onsite solar facility in the United States dedicated to a single customer.

“This project proves that even hard-to-abate sectors like steel can be decarbonized when companies come together with innovative solutions,” said Kevin Smith, CEO, Lightsource BP, Americas, at the time.

“Our collaboration with Xcel Energy and EVRAZ North America made Bighorn Solar a reality. It’s a great example of partners tackling complex issues that US industry is facing today, while at the same time preserving jobs in the manufacturing sector.”

“This is an exciting day for us at Xcel Energy. Working together with Lightsource BP and EVRAZ North America, we’re creating innovative solutions for our customers while developing new solar energy resources in Colorado,” added Bob Frenzel, president and CEO, Xcel Energy. “Through this collaboration we’re bringing jobs to the community, harnessing our natural resources and increasing renewable energy in the state.”

In August 2020, the Colorado Office of Economic Development and International Trade reported that the Evraz Board of Directors voted to proceed with the $500 million Pueblo Plant Project expansion to be powered by the solar array.

The steel mill, when operating at full capacity, is expected to process more than a billion pounds of steel each year into tens of millions of feet of rail for replacing and building train tracks in North America. The nearby solar array will reportedly power more than 90% of the mill.

The expansion project broke ground in 2021, with the new “state-of-the-art” mill planned to replace the current mill in Pueblo once completed. The general contractor for the project is Wanzek Construction from Fargo, North Dakota.

“Colorado is making nation-leading strides to confront climate change, create new job opportunities, and innovate for the future, and the Evraz solar-powered steel mill is a great example,” Colorado Gov. Jared Polis said in a statement to Construction Dive. “We are delivering real results to Coloradans, and we are seeing this in Pueblo, where the mill is bringing over 300 good new jobs to Southern Colorado, making Pueblo the Steel City for the future.”

“The rail mill will be powered by the 1,800 solar farms being constructed at the steel mill which is due to be complete by the end of the year the most green steel facility in North America and maybe the world,” said Skip Herald, CEO for EVRAZ North America.