A research team recently announced that it has successfully installed a wind blade pedestrian bridge in Cork, Ireland, with the goal of repurposing hard to recycle turbine blades. The Re-Wind Network installed a BladeBridge in January using end-of-life wind blades from Germany.

Originally funded in 2019 under the Irish Government Department of Transport’s “Project Ireland 2040” initiative, MTU identified an opportunity to build a blade bridge on a long-distance pedestrian and cycle route. The area in Midleton-Youghal Greenway is under development by Cork County Council to improve rural development, tourism and public health.

The structure reportedly uses two repurposed LM 13.4 wind blades from Nordex (Rockstock, Germany) N29 turbines, which were originally donated by Everun Ltd. in Belfast, for its main girders. While eight blades were donated in total, five were placed temporarily in storage, two were kept for the BladeBridge fabrication and one was sent to MTU for testing. 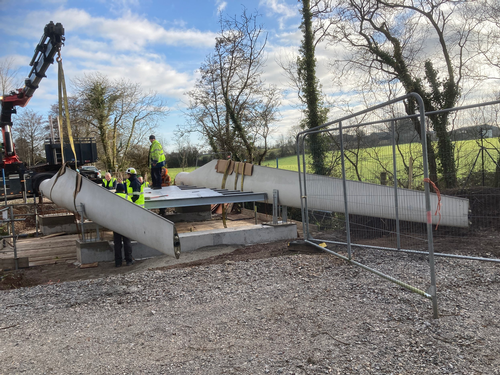 The Re-Wind Network
A research team recently announced that it has successfully installed a wind blade pedestrian bridge in Cork, Ireland, with the goal of repurposing hard to recycle turbine blades.

Prior to final installation, teams completed experimental testing, computational modeling and design work to ensure that the fiber-reinforced polymer wind blades were suitable to use as girders for the bridge.

Additionally, materials and mechanical testing, such as resin burnout tests, were reportedly completed to test material properties along the length of the blade and test tension and compression performance. A bending test was performed on a four-meter section of the blade to evaluate its ability to carry loads.

The Re-Wind team used its developed software “BladeMachine” to generate the engineering properties of the blade at multiple sections for its design. Initial plans considered architectural and structural requirements, such as different orientation and placements of the blades. The team also looked at connecting the stringers and deck to the blades and aesthetic details including guardrail design, deck height, blade length and construction materials.

The BladeBridge has a span of approximately five meters (16.4 feet) when measured from the root end, and the tip of the blade is embedded into the ground. In addition to being a pedestrian bridge, it was designed with the capacity and width to carry maintenance or emergency vehicles.

Crews planned to finish remaining landscaping, remove a shoring platform underneath and assemble handrails on the structure shortly after the bridge’s installation.

The bridge is one of two repurposed EOL wind blade designed planned for Re-Wind—a wind blade power pole, or BladePole, will reportedly be installed this summer in Kansas. The projects are supported by grants from the InvestNI/Department for the Economy, Science Foundation Ireland, U.S. National Science Foundation and MTU.

“This project would not have been possible without the vision and the enthusiastic support of the Cork County Council,” said Larry Bank, industry-academic outreach, The Re-Wind Network. “The Re-Wind Network is immensely proud of our Irish team at MTU and UCC led by Kieran Ruane and Angie Nagle.”

The Re-Wind Network was founded in 2017 with the goal of addressing the issue of composite material wind turbine waste. The research team is comprised of experts from City University of New York, Georgia Institute of Technology, University College Cork and Queen’s University Belfast.

According to Re-Wind, it is estimated that 39.8 million tons of material from the global wind industry will need disposed of by 2050. A typical 2.0 MW turbine has three 50-meter-long blades containing around 20 tons of fiber reinforced polymer composites, which an average lifespan of each blade being 20 years.

The materials used to construct wind blades, including glass fibers, resins and foams, are not biodegradable or easy to recycle. To address this, the research team looks at sustainable solutions including repurposing and recycling of the blades themselves.

“We’re exploring the potential reuse of the blades across architecture and engineering. Developing such methods can have a positive effect on air quality and water quality by decreasing a major source of non-biodegradable waste,” said Lawrence C. Bank, Georgia Institute of Technology.

The project began at the Digital Fabrication Laboratory at the Georgia Institute of Technology, where students designed and fabricated a prototype 15-meter-high tower structure from a decommissioned Clipper C69 wind turbine blade.

Re-Wind notes that research is being conducted in four areas:

It is funded under the U.S.-Ireland Tripartite Research Agreement.