The codes, adopted last fall after a push by Mayor Ashley Stolzmann, aim to cut the climate effects of new commercial and residential buildings by shifting towards an all-electric future.

According to Stolzmann, the newly adopted codes and construction rules are similar to building codes designed to help prevent the next wildfire from burning through the community, but go a step further, in that they also intend to cut an average home's energy use by about 9% compared to the 2018 standards through better heating and insulation practices—equating to about $410 of annual utility bill savings. 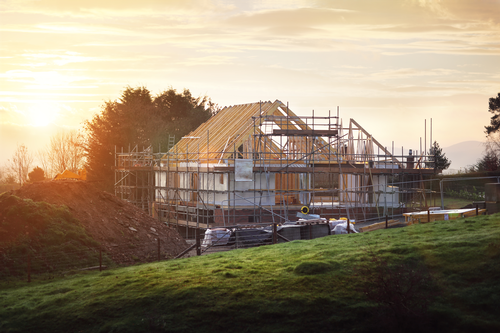 In a report on the cost effectiveness of the 2021 International Energy Conservation Code for residential buildings in July 2021, the Pacific Northwest National Laboratory reported that new codes would provide statewide energy savings of 19.9% across all climate zones compared to the current state energy code and that it would reduce statewide CO2 emissions over 30 years by just over 18 million metric tons, or roughly four million cars on the road.

“That's what building codes are fundamentally for. It's to keep your house from impacting your neighbor's house. These energy codes are no different than that,” Stolzmann said. “Climate change is an issue of immediate public interest.”

The new codes also require that new homes be net-zero emissions, which means Energy Star appliances, higher insulation values, solar panels or solar credits, and many other requirements such as vehicle charging stations within a garage and proper wiring for modern electric stoves.

As a result of the Marshall Fire in December, it was reported that nearly 600 homes in Louisville, Colorado, were destroyed. However, when looking at the number of affected homes across Boulder County, that number increases to 1,000 homes and about 6,200 acres of land.

In total, the Boulder County Assessor reports that the fire caused about $513 million in damages, making it among the costliest fires in Colorado’s history.

While supply chain issues and material price hikes continue to affect the industry, it has been estimated by various residential builders and contractors that the Zero Energy Residential Building Provisions will cost an additional $20,000-$100,000 to rebuild their homes.

Another issue standing in the way of affected homeowners are defining what will be covered by their insurance companies. According to reports, while standard homeowners’ insurance required by mortgage companies covers the repair and replacement of homes lost or damaged in a wildfire, it doesn’t technically cover the entire cost of the rebuild.

Other avenues affected residents are looking to are the possibility of revieing funds from the Federal Emergency Management Agency to make up for insurance short falls. Adam Heyns, a FEMA emergency management specialist recently told CPR News that although FEMA will step in to pay for repair and rebuilding costs insurance companies have refused to cover, the aid has a cap of $37,900. There is no cap on rental assistance, only that it is limited to 18 months.

Heyns added that those affected could also apply for low-interest disaster loans from the Small Business Administration, which has reportedly approved more than $12.7 million in direct loans to homeowners and renters affected by the Marshall Fire.

Given these stacked obstacles for those affected, both Stolzmann and Governor Jared Polis issued statements indicating that it was unfair for residents affected by the Marshall fire to cover the costs of meeting the new building code updates. Will Toor, Director of the Colorado Energy Office, also believes that the city overestimated the costs of meeting the new codes and reports that his staff is preparing an updated analysis.

In additional efforts, the city staff is working with several organizations to put together a suite of incentives and discounts to defray the added costs. Polis also issued a public letter, informing the public that he was planning to introduce legislation to fund a “sustainable and resilient recovery for your community and others in the future.”

Despite these attempts, it was reported over the weekend that more than 100 people rallied outside Louisville's City Hall and demanded that city council suspend the new building codes.

“We are in a crisis. We are trying to stabilize our lives and come back, and these codes just make it more expensive,” said organizer, Audrey DeBarros. “To require citizens who have lost everything to be on the forefront of innovation when the private sector, you know, doesn't really know how to build to that yet is really not fair.”

The city council is expected to discuss a meeting sometime today. Mayor Stolzmann did not respond to a request for comment made by The Denver Channel 7 News.

Spanning back several years, government officials had previously pushed for wildfire building codes but were combated by the Oregon Home Builders Association, who claimed that fire-safe codes would add substantial costs to a home’s price. In other reports, however, it was indicated that fire-resistant homes could be minimally higher or potentially cheaper.

While other Western states, like Colorado for instance, have yet to join the building code mandate, California has been leading the construction code battle against wildfires for more than a decade, having outlined its own wildland-urban interface codes. In its own version of the legislation, California specifies that roofs, siding and windows must be fire-resistant.

Minor aspects of a home, such as fine mesh over attic vents, are also important in preventing embers from being blown into a home and are also outlined in the building codes.

Apart from fire protection, many cities and states have also been making the push for an all-electric future, like Stolzmann.

In September 2021, the California Energy Commission announced its adoption of the 2022 Building Energy Efficiency Standards (Energy Code) for newly constructed and renovated buildings. The new energy codes are slated to produce benefits to support the state’s public health, climate and clean energy goals.

Making an approach on a potentially all-electric future, the 2022 Energy Code focuses on four key areas in newly constructed homes and businesses:

The news arrived a little over a year after San Francisco’s Board of Supervisors unanimously passed a new city ordinance, banning the use natural gas or other fossil fuels in all new residential and commercial building construction projects.

The new ordinance requires that these projects adopt all-electric power, starting in June 2021, and plans to cover about 60% of the city’s current development pipeline in an effort to reduce carbon emissions and tackle climate change. However, an amendment to the ordinance allows restaurants to apply for a waiver through the end of 2022 to use a natural gas stove.

At the time, the decision made San Francisco the latest—and possibly the largest—U.S. city to ban natural gas in new buildings to date.

In implementing the new legislation, the city is expected to reduce 21% of emissions from commercial buildings by 2030, when the entire city aims to run on 100% renewable electricity. Of the city’s total emissions, buildings and transportation are estimated to make up about 90%, respectively.

Because the plan is based on a building’s size, the timeline to go fully renewable is as follows:

At the time the legislation was approved, San Francisco reported that the city had already reduced its greenhouse gas emissions by 36% in comparison to its 1990 levels. San Francisco was also ranked as one of the top five cities for clean energy in July 2019 by the American Council for an Energy-Efficient Economy, a nonprofit that promotes efficient energy policies.