Global chemical company BASF recently announced that Swiss International Air Lines plans to equip its entire Boeing long-haul fleet with its AeroSHARK surface technology. According to the release, a total of 12 Boeing 777-300ERs will gradually be fitted with the technology beginning in the middle of the year during suitable maintenance layovers.

SWISS is reportedly the first passenger airline worldwide to use AeroSHARK technology, developed jointly by Lufthansa Technik and BASF, to reduce fuel consumption and emissions.

“Reducing our environmental footprint is one of the biggest challenges facing the aviation industry, and becoming carbon-neutral until 2050 is an important strategic goal for SWISS,” said Dieter Vranckx, Chief Executive Officer of SWISS.

“We are keen to actively promote and invest in the use of new technologies. We are pleased to be the world's first passenger airline to offer the innovative AeroSHARK technology on our Boeing 777 fleet, making another important contribution to more sustainable air travel in the future.”

The modification of the “long” Boeing 777-300ER will use approximately 950 square meters of riblet film, larger than the previously used 800 square meters on Lufthansa Cargo’s Boeing 777F launch. According to the release, the potential for fuel and carbon dioxide savings on this scale is about 1.1%. 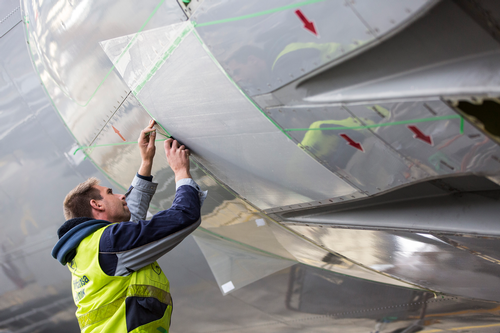 Annually, SWISS estimates they will save more than 4,800 tons of kerosene and roughly 15,200 tons of CO2, based on its operation profile. This much is typically generated on approximately 87 long-haul flights from Zurich to Mumbai.

“Due to the long lifecycles in our industry, we cannot only rely on new aircraft generations to reduce our environmental footprint, but also need to specifically optimize existing fleets towards sustainability,” explained Dr. Johannes Bussmann, Chief Executive Officer of Lufthansa Technik. “AeroSHARK makes a significant contribution to this, and I am very pleased that SWISS is leading the way.”

“In developing our Novaflex Sharkskin surfaces, the focus was on a robust yet functional solution that meets the stringent requirements of aviation and also helps our customers achieve their sustainability goals,” added Uta Holzenkamp, head of BASF's Coatings division and in this position also responsible for functional films. “The fact that SWISS is convinced by our solution shows that economic action and sustainability go hand in hand.”

In summer 2021, BASF reports that a SWISS Boeing 777 wing was measured for the entire duration of a regularly schedule flight between Zurich and San Francisco. The data collected from this test allow Lufthansa to create accurate 3D models for flow simulations. In the near future, the company anticipates to apply this modification to the wings of the aircraft to further savings potential.

SWISS also provided one of its aircraft for the STC flight to obtain the required Supplemental Type Certificate from the European Union Aviation Safety Agency.

In a joint news release, Lufthansa and BASAF announced the launch of its shark-inspired surface coatings technology in May 2021.

Using nature as a role model, Lufthansa Technik and BASF developed a surface film that mimics the fine structure of a shark’s skin. The aerospace coating, dubbed AeroSHARK, is reported to lower the frictional resistance of an aircraft in the air, ultimately lowering fuel consumption.

“Responsibility for the environment and society is a key strategic topic for us,” said Christina Foerster, Member of the Executive Board of Deutsche Lufthansa AG with responsibility for sustainability, at the time. “We have always played a leading role in introducing environmentally friendly technologies. The new sharkskin technology for aircraft shows what strong and highly innovative partners can achieve collectively for the environment. This will help us to achieve our goal of climate neutrality by 2050.”

Although on a much smaller scale than Boeing 777 freighters, the aviation industry has been reportedly researching the use of sharkskin for many years. In 2019, Lufthansa Technik and BASF fitted almost the entire lower half of a Lufthansa Boeing 747-400's fuselage with 500 square meters of such a jointly developed sharkskin surface and had this modification certified by EASA. As a result, the aircraft was noted to have savings potential on scheduled long-haul services during more than 1,500 flight hours.

The test proved that emissions could be reduced by around 0.8% thanks to the sharkskin modification. The savings are validated using a software for fuel consumption analyses developed by Lufthansa Technik, which allows the effectiveness of a wide variety of different aircraft modifications to be demonstrated reliably based on comprehensive data.

Consisting of riblets measuring around 50 micrometers, the film optimizes the aerodynamics on flow-related parts of the aircraft through its imitation of sharkskin properties, making aircrafts more economical in addition to reducing emissions. For Lufthansa Cargo’s Boeing 777F freighters specifically, Lufthansa Technik estimates a drag reduction of more than 1%.

For the entire fleet of 10 aircrafts, Lufthansa Technik translated the percentage to an annual savings of around 3,700 tons of kerosene and just under 11,700 tons of CO2 emissions, which is the equivalent of 48 individual freight flights from Frankfurt to Shanghai.

According to the release, Lufthansa Technik, in its cooperation with BASF, planned to obtain a Supplemental Type Certificate (STC) for the 777F from the European Union Aviation Safety Agency (EASA), which is required for operation. The company is noted to have already been backed by decades of experience as an approved aviation design organization.

For AeroSHARK, Lufthansa Technik is responsible for the material specification, approval by the aviation authorities and performance of aircraft modifications carried out as part of regular maintenance layovers.

The Coatings division of BASF developed the functional films within its Beyond Paint Solutions unit. The company’s solution was implemented together with Lufthansa Technik and fulfills strict aviation requirements.

Because exterior aviation surfaces are exposed to strong UV radiation, temperature and pressure fluctuations, among other elements, BASF has made it a point to focus its development on achieving extreme durability and weather resistance. The key criteria for use in aviation operation includes simple application and handling as well as ease-of-repair, for which a custom concept has been developed.

Lufthansa Technik and BASF intend to continue developing the new technology consistently to include additional aircraft types and even larger surfaces so that they can support airlines around the globe even more comprehensively in the future in reaching their sustainability goals. Initial model calculations showed that use of sharkskin technology at its highest expansion level could reduce CO2 emissions by as much as 3%.