A variety of jobs reports, employment forecasts and publications are reporting that the industry is suffering from more than just paint shortages, supply chain backlogs and inflation.

While trying to recover from COVID-19 setbacks and economic downfalls, contractors are now facing another hurdle: labor shortages. From skilled craftworkers to painters, the workforce is reporting an employment decline despite new work opportunities and design contracts.

Cloud-based human resources and talent acquisition solution LaborIQ, by ThinkWhy, has recently issued a new job forecast for construction and extraction occupations, detailing that while the industry is expected to expand by 3.9% (nearly 240,000 jobs) in 2022, the growth could be thwarted by limited labor supply.

In 2021, despite COVID-19 challenges, the construction industry was able to add 121,000 jobs overall with gains in the following major subsectors:

In September alone, the U.S. Department of Labor’s Bureau of Labor Statistics reported that firms hired 22,000 new employees. In addition, the DOL report also revealed that construction’s jobless rate of 4.5% had slightly improved from the previous month’s 4.6% figure. Despite the increase in workers, however, the industry has yet to reach pre-pandemic levels and was sitting 201,000 employees below its February 2020 numbers. 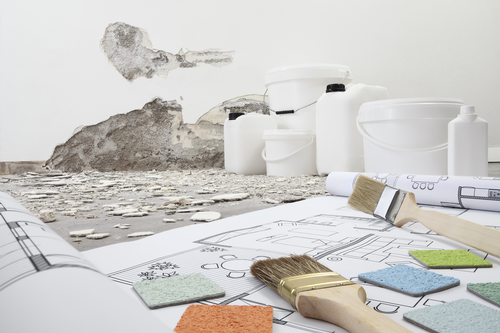 Visivasnc / Getty Images
A variety of jobs reports, employment forecasts and publications are reporting that the industry is suffering from more than just paint shortages, supply chain backlogs and inflation.

In looking at the numbers today, ThinkWhy reports that residential construction was the only subsector to recover from pandemic job losses on a national level.

Additionally, the Associated Builders and Contractors recently analyzed data released by the U.S. Bureau of Labor Statistics, finding that the construction industry lost 5,000 jobs on net in January, that nonresidential construction employment had declined by 9,000 positions on net and that the heavy and civil engineering subsector lost 9,500 jobs on net.

The construction unemployment rate increased to 7.1% in January. Unemployment across all industries rose slightly from 3.9% in December to 4.0% last month.

“There are at least a dozen explanations for today’s employment report, which indicates that nonresidential construction employment declined in January even as many other segments added many jobs,” said ABC Chief Economist Anirban Basu. “First, it is conceivable that many construction workers left for other industries, including those who work in union settings, since pay increases are limited by pre-existing labor contracts.

“Second, it is possible that the omicron variant, which was peaking during the survey’s reference week, kept some workers off of payrolls. That explanation seems debatable, given rapid job growth economywide. Third, since much of the construction job loss was in infrastructure-oriented segments, it may be that some purchasers of public construction services have shifted into planning and engineering mode to figure out how incoming infrastructure dollars can and should be spent.

“Finally, it may also be the case that rapid cost increases during the pandemic have led more project owners, both public and private, to postpone projects. Whatever the explanation, the overall employment report has some important implications for contractors.”

Overall, the ABC reports that the industry has recovered slightly more than one million (91%) of the jobs lost during earlier stages of the pandemic.

Shifting focus to the future, the Job Market Outlook reports that the U.S. economy was on track to add at least 5.2 million jobs in 2021 and is forecasted to gain 3.6 million jobs in 2022. However, the report also states that, “Even if every one of the nearly 7 million unemployed people took an open job, there would still not be enough people in the labor market to fill these open roles.”

“The big challenge for talent acquisition is the tightness of the labor market – businesses are struggling to find and retain talent, and turnover is high as workers move across jobs, industries and geographies.”

In an article initially published in the Wall Street Journal, reporters found that some builders had to halt sales altogether while they caught up with a backlog due to a shortage of labor and increased housing demand. Similar in the coatings industry, in addition to paint supply chain issues, the industry is also struggling to retain skilled tradespeople, which has led to additional project disruptions.

On top of retaining employees, the omicron variant has also been noted to throw additional hurdles in the way on the road to recovery. From late December to mid-January, according to a Washington Post analysis of Census Household Pulse Survey data for that timeframe, approximately 8.8 million workers reported missing work either because they were sick with the coronavirus or caring for someone else who was ill.

David Brown, a project executive at CNY Group, a New York City-based contractor, has gone as far as to tell reporters that he was witnessing a 10-15% loss of workers on any given day.

The sessions, which can be held over a period of two to four months, aim to either hire new or replacement tradespersons that are up to speed on ongoing projects and can help to get more work completed.

Another executive recruiter at The Birmingham Group, a Berkley, Michigan-based construction recruiting firm, Jacob Binke, has suggested that technology could also be a useful tool.

One thing is certain, the labor shortage will have to be addressed, just as all the current industry issues are continuing to be handled, as the need for workers is showing no signs of decreasing. At the end of January, The American Institute of Architects confirmed in a new report that the Architecture Billing Index ended 2021 on a strong note, having reported a score of 52 for the month of December.

The ABI score for rose one point compared to 51 reported in November (any score above 50 indicates an increase in billings). Despite the positive reading, AIA reported that staff recruitments were becoming a growing concern among firms, among other ongoing issues, such as concerns related to the omicron variant, rising prices and availability of construction materials.