The February issue of the Journal of Protective Coatings & Linings is now available in print and online at paintsquare.com. This issue contains feature articles on testing epoxy fire protective coatings, Tnemec’s 100 years in business and how insulative coatings could potentially eliminate corrosion under insulation.

Opening up the February issue of JPCL, Edye Fox Abrams, Vice President, Business Development of The ChemQuest Group and a member of the JPCL Advisory Board, gives her perspective on the coatings chemicals market for the beginning of 2022.

“Until the onset of COVID-19, the protective coatings industry was relatively stagnant. While some newly developed or updated formulations had come to market in the previous decades, not much had changed about how products were manufactured,” wrote Fox Abrams.

“Finally, change is in the air! And a leading driver of that change is based on what is going on in the chemical industry right now.” 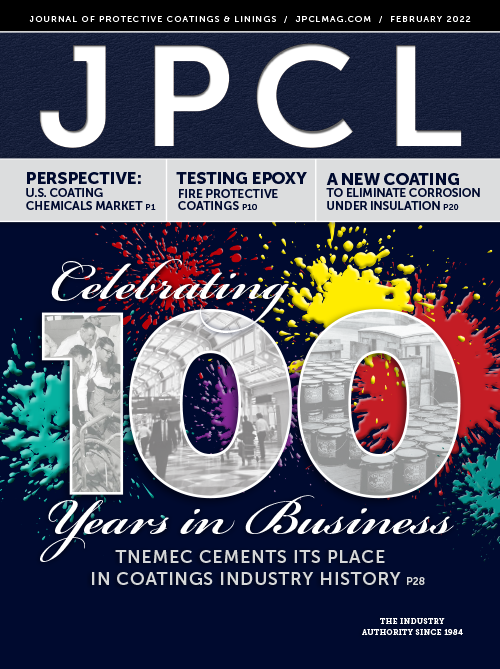 Following Perspective, editors pulled together some of the recent, most-read stories on PaintSquare.com for the Coverage section. Some of these topics included Q4 Earnings for PPG and Sherwin-Williams, and new staff appointments for ChemQuest, CRW and BASF.

In this issue’s features, Tnemec leaders discuss reaching the century milestone in “Tnemec Company Celebrates its First ‘Cementury.’” JPCL Managing Editor Destiny Johnson recently traveled to the company’s corporate office in North Kansas City, Missouri, to interview the folks behind the brand, learn about its history and see where the paint manufacturing magic happens.

As a final installation, in “Are CUI's Days Finally Numbered?: Insulative Coatings Show Potential for Eliminating Corrosion Under Insulation,” Bruce Toews, Neil Wilds and Johnny C. Pourciau of Sherwin-Williams Protective & Marine discuss a new coating currently undergoing trials that has the potential to eliminate corrosion under insulation altogether by acting as its own insulation, thus making traditional insulation obsolete.

Readers can also find the recurring Bid Bits and Paint by Numbers articles in this issue.

According to JPCL Editor-in-Chief Charlie Lange, readers can expect the following topics in the March issue:

Did you know JPCL is available in multiple formats? In addition to the print edition, you can read the full January issue as a digital flipbook online, in a downloadable PDF or as individual articles on paintsquare.com.

Following the release of each issue, the magazine is added to the JPCL archives—containing 25 years of JPCL digital issues dating back to 1996—which cover a priceless collection of evergreen information, solutions to real-life problems, case studies, insight from experts and a historical record of the industry.

In 2020 alone, Technology Publishing CEO Brion Palmer reported that more than 25,000 industry professionals accessed the archives. However, the content is only available to current JPCL subscribers and, in separating from SSPC, is no longer an association benefit.