Global coatings firm The Sherwin-Williams Company announced in a press release last week that it would be expanding its manufacturing and distribution capabilities in Statesville, North Carolina.

As part of the deal, Sherwin-Williams reports that it will be investing a minimum of $300 million into the project with plans to add more than 180 full-time jobs at the site over the next three years, essentially doubling the facility’s existing workforce.

“Sherwin-Williams continues to invest in initiatives that support our growth for years to come. The planned expansion of our Statesville facility demonstrates a deep commitment to both our customers and the region,” said John G. Morikis, Sherwin-Williams Chairman, President and Chief Executive Officer.

“This investment will not only allow us to meet the growing customer demand in the region, but it will also add a number of good-paying jobs to our already vibrant employee base in the community.”

While Sherwin-Williams was reported to have considered several locations for expansion in a competitive vetting process, it reportedly landed on the Statesville facility for its transportation infrastructure, ability to handle expanded capacity and its location that provides for the centralization of existing distribution opportunities for the company's regional operations.

The company also noted in its release that it was extremely pleased with the high quality of its current workforce at the North Carolina facilities and is confident in having continued access. Furthermore, Sherwin-Williams will receive incentives and benefits valued at approximately $30 million from the state, county and local government as part of the agreement. 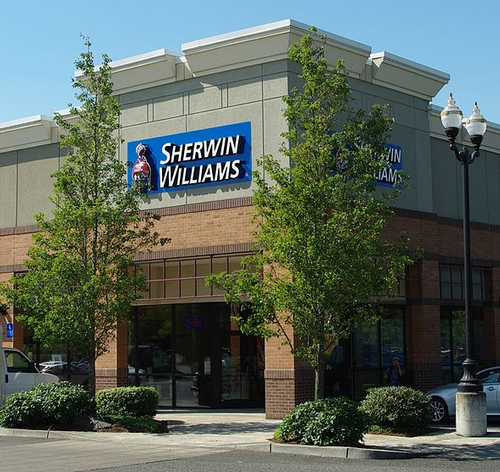 M.O. Stevens, CC BY-SA 3.0, via Wikimedia Commons
Global coatings firm The Sherwin-Williams Company announced in a press release last week that it would be expanding its manufacturing and distribution capabilities in Statesville, North Carolina.

“Sherwin-Williams has long been a top employer in North Carolina. There are currently more than 2,400 full-time Sherwin-Williams employees working in the state, and today's announcement ensures a substantial number of jobs will be added over the next three years,” said North Carolina Governor Roy Cooper.

“Because of this continued partnership, the state was pleased to provide the necessary financial incentives to support the Company's decision to grow its footprint in the city of Statesville for years to come.”

For the project, Sherwin-Williams is planning to expand its existing 200,000-square-foot manufacturing facility by 36,000 square feet. The company also plans to add four new rail spurs and construct a new 800,000-square-foot distribution and fleet transportation center.

The new center is reported to have an additional 200,000 square feet available for future expansion.

Back in September, it was announced that due to a variety of factors, aside from the ongoing COVID-19 pandemic, the industry was witnessing a shortage and price surge in paint.

From the surge of demand by do-it-yourselfers stuck at home, to the strange freeze that took over Texas earlier this year and worsening supply chain issues, the coatings industry has been backed into a corner with no signs of when the market will improve, some experts said.

Wall Street economists have also reported to side with the transitory position.

These shortages, seen mostly in epoxies and acrylics, as well as several types of solvents and additives, are the main issues the industry is facing now, according equity analyst firm, Morgan Stanley.

“These production disruptions, coupled with surging architectural and industrial demand, have pressured raw material supply and rapidly driven prices upward,” Julie Young, Vice President of Global Corporate Communications for Sherwin-Williams, said in a statement to CNBC at the time of the report.

“The pace at which capacity comes back online and supply becomes more robust remains uncertain. We have been highly proactive in managing the supply chain disruptions to minimize the impact on our customers.”

However, despite these efforts by Sherwin and other global coatings companies, prices have continued to rise and supplies are still hard to come by, especially for small businesses.

In a story by Bloomberg, AkzoNobel CEO Thierry Vanlancker advised those looking to perform coatings work around the house to get in their cars and “buy paint now.” In an investor update, the Netherlands-based global paint manufacturer said pricing was set to increase significantly in the second half of 2021.

The following month, global coatings company RPM International Inc. reported that with the purchase of a 178,000-square-foot chemical manufacturing facility in Corsicana, Texas, the company was hoping to strengthen its supply chain and increase resin production amid global shortages.

And, in an updated report in December, it was reported that the industry was still witnessing an increase in costs for raw materials that are becoming even more difficult to find due to supply shortages.

The U.S. Bureau of Labor Statistics show the market has leveled out for the moment, with manufacturers stockpiling materials in preparation for the shortage and price increases.