Earlier this week, the National Transportation Safety Board released its preliminary investigation findings for the collapse of the Fern Hollow Bridge in Pittsburgh.

While the final report may take over a year to complete, the NTSB plans to work with the Federal Highway Administration, the Pennsylvania Department of Transportation, the City of Pittsburgh and the Port Authority of Allegheny County to look at the bridge’s design, history and inspections.

The first steps for demolition at the site of the collapsed bridge began on Feb. 5, including building an access road down the embankment for equipment. 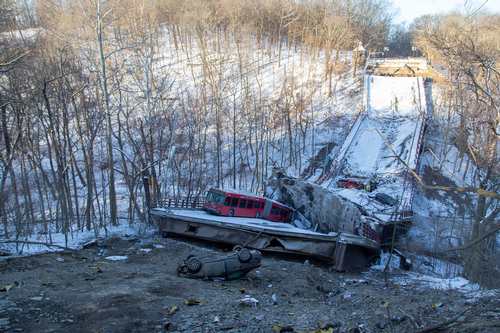 NTSB
Earlier this week, the National Transportation Safety Board released its preliminary investigation findings for the collapse of the Fern Hollow Bridge in Pittsburgh.

According to the release, certain areas of the welded steel girders were identified as being fracture critical, but no primary fractures were found in those areas. Initial assessment indicates the collapse began at the west end of the bridge.

As more debris are removed and areas are more accessible, further examination is expected to be performed. The NTSB also plans to conduct forensic examination of several of the bridge’s components, as well as evaluate the design of the bridge, its condition at the time of the collapse, its maintenance and rehabilitation history and its inspection and load rating history.

Footage recovered from the seven cameras on the Port Authority bus will be analyzed for further information by a group of specialists. These cameras include one forward-facing camera, one right side aft facing camera and five interior cameras.

“The recovery of evidence, including extraction and documentation, is expected to be a lengthy process,” the NTSB wrote. “All aspects of the collapse remain under investigation while the NTSB determines the probable cause, with the intent of issuing safety recommendations to prevent similar events.”

On Friday, Jan. 28 around 6:40 a.m., the Allegheny County Police Department was notified about a partial bridge collapse over Frick Park. Emergency crews arrived at Forbes Avenue Bridge, also referred to as the Fern Hollow Bridge, around Forbes and Braddock avenues.

An articulated Port Authority bus and four passenger vehicles were on the bridge at the time of the collapse, along with a fifth passenger vehicle that drove off the east bridge abutment following the collapse. First responder crews rappelled 100 to 150 feet to reach victims, while others formed a “human chain” to rescue people from the bus.

Authorities reported 10 “minor injuries,” with at least three people being transported to the hospital and some of those injured being first responders. None of the injuries were life-threatening, said Pittsburgh Fire Department Chief Darryl Jones.

Urban Search and Rescue crews drilled holes into the bridge deck, utilizing search cameras “just to make sure everyone is accounted for.” Search dogs were also on the scene.

“We were fortunate” that no one was killed," Pittsburgh Mayor Ed Gainey said from the scene of the collapse, where he was joined by Allegheny County Executive Rich Fitzgerald, Pennsylvania Lt. Gov. John Fetterman and others.

Initial reports from witnesses described a loud noise and hissing sound, along with a strong smell of natural gas in the area. Responders later confirmed that the collapse caused a gas line to break, prompting an evacuation of homes in the surrounding area. Authorities were eventually able to off the gas line, but a few hours later service was restored and families were permitted to return to homes, according to Jones.

President Biden was briefed on the collapse and spoke with state and local officials prior to his arrival in the city. Biden visited the bridge site around 1:30 p.m. that day ahead of his previously scheduled trip to Carnegie Mellon University’s Mill 19 research and development center to talk about infrastructure, the economy and supply chain issues.

"We saw today when a bridge is in disrepair, it literally can threaten lives,” Biden said at the event. “We're going to rebuild that bridge, along with thousands of other bridges in Pennsylvania and across the country, because it's in our interest for [our] own safety sake and it generates commerce in a way that we can't do now. That's part of how we're going to build a better America.”

Later in the afternoon, 13 members of the National Transportation Safety Board investigation team arrived at the site of the collapse. In their short time there, investigators were reportedly already able to study some of the bridge elements.

On Saturday (Jan. 29), the NTSB announced it had launched an investigation into the collapse, planning to look at the full history of the bridge, including design, construction and maintenance.

NTSB Chair Jennifer Homendy told reporters at a briefing in Pittsburgh on Jan. 29 that the investigation would be “lengthy.”

Currently, the final board report on the cause of the collapse will not be issued for 12 to 18 months, but the NTSB hopes it will take less time. A preliminary report is expected in about 10 days from the safety board, but will only include “factual information” and not a determination of the cause.

Pennsylvania Gov. Tom Wolf signed a proclamation of disaster emergency for the county following the collapse, authorizing state agencies to use all available resources and personnel, as necessary, to manage this emergency situation. According to the release, time-consuming bidding and contract procedures, as well as other formalities normally prescribed by law, are also waived through the proclamation.

A similar declaration was signed by Gainey on Jan. 30. The declaration will increase the availability of federal funds, facilitate closer coordination between PennDOT and Department of Mobility and Infrastructure (DOMI) and speed up cleanup and reconstruction of the Fern Hollow Bridge.

Crews from Allegheny Crane Rental lifted the Port Authority bus from the site on Jan. 31. Utilizing a 400-ton crane, the company’s largest piece of equipment and built on site at the collapse, the bus was lifted by straps underneath it.

ONE WEEK AGO: Last Monday, the Port Authority Bus was safely removed from the Fern Hollow Bridge in Frick Park.

Watch the removal process take place in under one minute during this time lapse ?? pic.twitter.com/hVlpCtt9uQ

The 447-foot, rigid steel frame bridge with three spans was built in 1970 and owned by the city. According to reports, the posted weight limit of the bridge is 26 tons and sees an average of more than 14,000 vehicles a day.

Forbes Avenue is a four-lane, non-divided roadway with two travel lanes in both directions. Sidewalks flanked the travel lanes on both sides, and at the time of the collapse, some snow had accumulated on the roadway and bridge surfaces.

The bridge goes across Frick Park, one of the city’s largest parks, over the Hot Dog Dam Dog Park and a public walking trail. The park was closed for safety reasons; parts of the park were reopened on Jan. 31.

Gainey told reporters the bridge was last inspected in September 2021, with the report from Pennsylvania Department of Transportation stating that the bridge received an overall “poor” rating and has been consistently found to be in this condition in since 2011. The deck condition and superstructure condition received poor scores, while the substructure condition gained a “satisfactory” rating.

According to PennDOT, Pennsylvania has the third-largest number of bridges in the nation and the average age of bridges in the state system is over 50 years old. PennDOT conducts approximately 18,000 inspections annually on state-owned bridges, with inspection intervals based on each bridge’s condition ratings and several other criteria. Inspection intervals reportedly range from 6 months up to a maximum of 48 months.

The “Bridge Conditions” page on the PennDOT site shows 175 bridges in Allegheny County rated as poor. $1.6 billion of funding from the infrastructure bill is expected to go towards the state’s bridge maintenance.

“We do have people go out and inspect the bridges. As you know, Pittsburgh is the city of bridges. We have a lot of them, and they’re routinely inspected,” Jones said at the time. “So, this one caught everyone by surprise this morning.”

According to the Pittsburgh Post-Gazette­, the FHWA notified the state that the project to reconstruct the bridge was awarded a $25.3 million grant through the National Highway Performance Program. Cheryl Moon-Sirianni, PennDOT District Executive, told reporters they weren’t sure how long it would take to build the new structure, because supply chain problems have made steel beams and other construction supplies difficult to obtain.

Private firms for a design-build team are expected to be named in the coming weeks. PennDOT will oversee the project.

“Those emergency declarations allow us to move more quickly,” Moon-Sirianni said. “Our goal is to do all of the work with the design-build team.”

“These bills make the process of maintaining and improving our infrastructure more transparent,” O’Connor said. “To make sure that Pittsburghers get to where they need to go safely and securely, this legislation will also bring experts to the table to provide guidance on our immediate infrastructure needs and prioritizing long-term strategic investment.”

The council would reportedly be comprised of 15 members, including city officials, organized labor, construction industry professionals and residents with relevant experience and credentials.

The Department of Mobility and Infrastructure develop regular reports, which would be publicly accessible through a website created in collaboration with the Department of Innovation and Performance.

The legislation was expected to be considered for a preliminary vote last week.

The following Saturday (Feb. 7), crews continued work at the collapse site, preparing to bring in demolition equipment. Swank Construction was contracted to handle the demolition of the bridge, which is prioritizing moving parts of the bridge for the NTSB team to aid the investigation.

“The way the bridge fell, there is a lot of things on top of one another and obviously you just can’t lift them up and move them. It requires large pieces of machinery,” Moon-Sirianni told CBS Pittsburgh.

“The NTSB needs to see some things that may have been covered in concrete or may need some things moved for their investigation to continue. So, the contractors helping them, you know, move some of these large pieces.”

Currently, there is no timeline for demolition because the NTSB needs to complete their investigation and turn the site over to the contractor. Additionally, Moon-Sirianni said they hope to conduct a geotechnical investigation by drilling. The recent bad weather has also caused progress to move slowly.