During the event, BlastOne presented live demonstrations of several products, including new, patent-pending technologies, in addition to providing information seminars, product overviews and opportunities for company and industry professionals to network and discuss professional development.

To kick things off Tuesday (Feb. 1) morning, members of BlastOne discussed the timeline for the afternoon and presented some coating thickness gauges and inspection instruments made by DeFelsko. Following the short instructional, coffee and breakfast snacks, attending contractors and industry professionals headed outdoors for the first of several live demonstrations.

Before witnessing some of the blasting equipment in action, BlastOne first utilized its diesel powered VecLoader 721 trailer-mounted vacuum. Reported to be one of the most powerful vacuum units available, the machinery has 3,660 CFM and 28” HG of suction. The cyclone/dust collector is hydraulically raised to allow loading of waste material into bulk bags or into a dumpster. 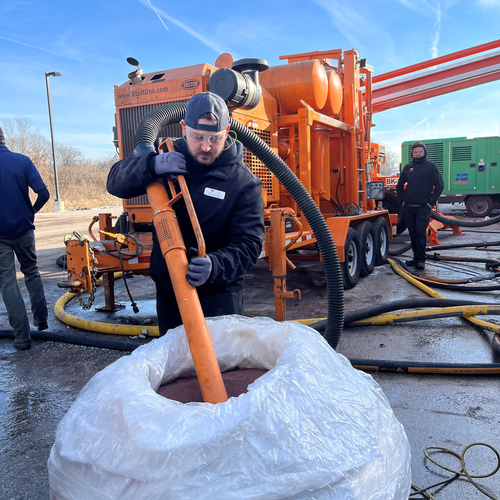 The company notes that the VecLoader will convey between 7-11 tons of abrasive per hour and has a primary (coated bags, pulse air cleaned) and secondary filtration (pleated cartridge) system.

The BlastOne team showed the concept of loading abrasive into a bulk blast pot by vacuum, by using a vacuum transfer lid. The operator vacuumed directly from a super-sack of abrasive and the abrasive dropped out of the vacuum hose into the blast pot. BlastOne reported the ability to fill an eight-ton bulk pot in roughly one hour with this method. This allows loading of a bulk pot from super sacks without the need for a crane or the hazard of an operator having to open a bulk bags under a suspended load, which has been identified by many industrial sites as a safety hazard.

Following this introductory demonstration, Jim Gooden presented one of BlastOne’s newest innovations. Dubbed the IntelliBlast, the patent-pending technology aims to allow for real-time monitoring of abrasive consumption and other blasting data from a remote location. Gooden went on to note during the live presentation that operators would be able to select the abrasive, inlet pressure and inlet temperatures, while also knowing the current outlet flow, outlet pressure and dew point for up to four hoses at a time.

BlastOne team members then highlighted another new technology: the Snakebite XQ Blast Nozzle. Noted to reduce sound by up to 20 decibels, the nozzle silencer also promotes a reduced thrust and was previously presented at Coatings+ in Phoenix.

According to BlastOne, the team partnered with the Center for Hypersonics at Queensland University in Brisbane, Australia, to define the new geometry that works to maximize nozzle cleaning efficiency while producing reduced noise and thrust. The new technology was developed utilizing Computational Fluid Dynamics modeling to simulate performance and later underwent Schlieren experiments.

As a result of initial testing with an automatic blast cabinet robot, thrust and noise testing rigs, the nozzle was reported to have eliminated blasting “screech” and was measured on the day to have reduced noise by 16dBA. Nozzle thrust was also reported to have been reduced by up to 45%.

In developing the Snakebite technology, BlastOne believes that the nozzle will be able to:

After contractors were given the opportunity to feel the differences in operation for themselves, BlastOne proceeded to present its MistBlaster. This specific blasting technology is capable of shifting between wet and dry blasting with the flip of a switch and is reported to offer low water consumption of roughly one half-pint per minute.

According to BlastOne, the MistBlaster is also an environmentally safe, cost-effective surface cleaning method that reduces airborne dust and requires less containment. The MistBlaster offers four modes: wet and dry blasting; wash down; and blow down.

Next up was the BlastOne Tornado XL, a high efficiency blaster featuring two hyper-powered robotic spinning nozzles that are noted to produce blasting outputs of five manual blasters.

During the demonstration, the Tornado XL was mounted to an excavator, but the BlastOne team reported that the technology has multiple mounting options and is very versatile.

The morning’s demonstrations ended with a presentation of Fletcher’s Model Bk-80 multi-purpose blaster. Given the name for its ability to reach 80 feet, the robotic model is capable of ultra-high pressure water and abrasive grit blasting.

The technology is reported to be designed with a semi-autonomous blasting cycle that maintains optimal direction, speed, angle and distance from the blasting surface. Dust and grit are also reportedly collected at the source to reduce the need for containment or cleanup.

After a pleasant lunch break, attendees stayed within the facilities where Jim Gooden gave a presentation on “Dangerous Dust: Beryllium and Silica.” During the presentation, Gooden offered insight and factual reports from OSHA and other entities on the severity of these health-threatening materials. For a portion of the presentation, Vice President of New Market Development and Technical Management at GMA Garnet Group, Pete Mitchell, offered addition insight into the varies types of abrasives and what toxins can still be found in materials such a nickel and coal slag, among others.

The presentation was followed by an open discussion, “Knowledge Sharing: Industry Tips & Best Practices.” During this discussion, attendees shared their insights and what they were doing to minimize project costs and job rates.

When entering the second half of the event, BlastOne again took attendees outside for several live demonstrations, starting with an internal pipeline blasting robot. Ideal for penstocks, tunnels, pipelines, wind towers and other pipe internals, the technology is capable of blast cleaning a full 360 degrees and can be self-propelled forward or in a reverse motion.

During the final presentations, BlastOne held demonstrations of its VertiDrive B7100 Blasting Robot and Schmidt AmphiBlast MegaBlaster.

The VertiDrive overcame vertical heights while simultaneously blasting within a five-foot-wide blast pattern. The semi-autonomous robot is suited with two strong magnets, various sensors can handle up to three, number eight nozzles at a time. Its swing arms can be adjusted for width, speed and distance from the surface.

The MegaBlaster offers up to four sandblasting operators to simultaneously control any combination of wet, dry or blown down modes. This technology is reported to be ideal for high production use.

After the demonstrations has ceased, BlastOne ended the afternoon with tours of its facilities and break-out sessions with specialty tools and networking opportunities between attendees.