A park in Vine City, Georgia, was designed to hold 10 million gallons of stormwater to alleviate flooding in the area while maintaining a community space.

The $45 million Rodney Cook Sr. Park opened in July 2021, replacing empty lots with a 16-acre community park as part of the largest investment in a public park for Atlanta’s Westside neighborhood in more than 50 years.

Vine City, a historic region for the Civil Rights Movement in the 1960s and once home to Martin Luther King, Jr., regularly floods, averaging about 50 inches of annual rainfall and being the low point in the area’s 150-acre drainage shed.

In September 2002, flooding from Tropical Storm Hanna overwhelmed the sewer system in the city, creating a mixture of stormwater and untreated sewage. While all the residents were able to make it to safety, hundreds of homes were damaged in the six feet of floodwaters. 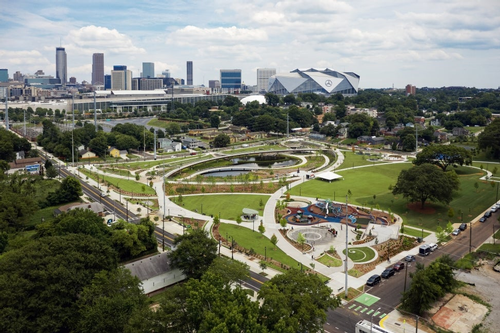 HDR
A park in Vine City, Georgia, was designed to hold 10 million gallons of stormwater to alleviate flooding in the area while maintaining a community space.

For some, the damage was so bad that the city purchased 60 properties, relocated its tenants and razed the houses in preparation for future flooding. This land sat empty for more than a decade, which then became contaminated with lead due to the import of soils used to build up the residential pad sites.

In 2012, the city formed legislation to begin development of the land and revitalize the community, over growing concerns about its socioeconomic impact and infrastructure.

“Instead of only building big vaults and installing pipes and drain inlets, which are expensive and really only serve the aim of flood control, we look for opportunities to use parks and natural systems to manage flooding and improve water quality,” said Jay Wozniak, Landscape Architect and Georgia Director of Urban Parks at The Trust for Public Land.

“It was embracing that there is a problem but turning it into an amenity,” said David West, a Senior Landscape Architect from HDR’s Atlanta office.

“Instead of being vacant land, which it was for more than 10 years after the homes were removed, we wanted to create a place that brought the community back together,” said Robby Bryant, HDR’s principal landscape architect.

According to HDR, the 10-million-gallon pond provides relief to Proctor Creek, eliminates combined sewer overflows for a 100-year storm event, reduces strain on the city’s sewer system and provides relief to the 150-acre area along Joseph E. Boone Boulevard.  A three-acre meadow is part of the park’s floodable space, where its two-acre pond will overflow into.

When water levels rise, lower level paths become submerged first, allowing park visitors to leave the area due to the path design’s width and multiple exit points. The 2-acre great lawn was also designed to hold up to two feet of water and features engineered soils and perforated pipes that allow the water to drain back to the main pond.

Other sustainable features included rain gardens to filter storm flow from incoming pipes, stormwater planters along the street to capture runoff and constructed wetlands and native plants around the wet pond to enhance water quality.

The ponds, wetlands, bioretention ponds and stormwater plants work together to capture, naturally filter and slowly release the stormwater to reduce loads that can strain the sewer system. According to Freese and Nichols, this improves downstream water quality, decreases future capital expenses and lowers maintenance costs.

The park flooded several times during and after construction, according to reports, with the drainage system working as expected.

“At a time when we are all finding the outdoors ever more important to our physical and mental health, The Trust for Public Land is thrilled to deliver Vine City and Westside Atlanta families a world-class park and the lifestyle and health benefits that come with it,” said George Dusenbury, Georgia State Director for The Trust for Public Land, at the opening ceremony. “Our hope is that Cook Park can serve as an example of thoughtful, community-driven investments to provide quality outdoor access.”

The project has one several awards including the Regional Excellence Award 2021 in the Great Place Category from the Atlanta Regional commission, Award of Merit 2021 in Landscape/Urban Development from Engineering News-Record Southeast and the Award of Excellence 2019 in Analysis & Planning Category from the American Society of Landscape Architects, Georgia Chapter.