Highlights from the Current Issue of JPCL

JPCL is pleased to open the new year with its January 2022 issue, currently available in print and online at paintsquare.com. This issue contains feature articles on concrete surface preparation, a bridge rehabilitation project in New York City and a Coatings Industry Forecast Roundtable featuring representatives from some of the industry’s major coating suppliers.

Giving readers a glimpse of what’s to come in the new year in his “Letter from the Editor,” Editor-in-Chief Charlie Lange also presents the opportunity to “pass the mic” to make room for other voices in JPCL.

“In future issues, you’ll see this page repurposed and, hopefully, find something more applicable to your line of work,” wrote Lange. “We’ll include perspectives from our esteemed Editorial Advisory Board members and offer updates on what our editorial committees have been discussing.

“We also plan to include readers’ perspectives and letters to the editorial team – and we’re humbly requesting your help with that endeavor. If there’s something you’d like to share with the JPCL readership, or questions for our editors or our advisory board, or anything else you feel should be included, please don’t hesitate to reach out.” 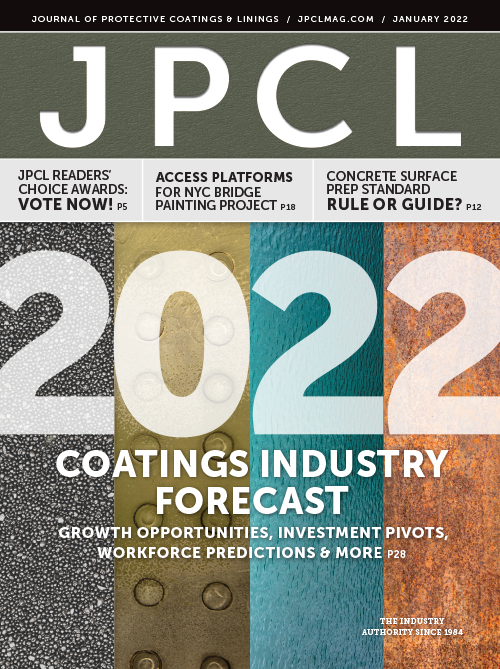 In addition, it was announced that voting is now open for the 2021 JPCL Readers’ Choice Awards, which honor the authors of the top articles that have appeared in the magazine over the past year. JPCL readers are encouraged to vote for their favorite articles published between January 2021 and December 2021 in four categories, now through March 1. The winning articles and authors will be announced in the March issue of JPCL.

Following Lange’s letter to readers, the issue pulled together some of its recent, most-read stories on PaintSquare.com in its Coverage section. Some of these topics included RPM’s net sales increase for 2022 Q2, new leadership changes for PPG and HoldTight, and Seal for Life acquisitions.

In terms of this issue’s features, Bill Jenkins, Technical Services Manager, International Paint LLC/AkzoNobel outlines a debate about whether specifiers should regard this as a standard or a guide in “Rule or Suggestion?: The Controversy over SSPC-SP 13/NACE No. 6.” As the chair of the SSPC-SP 13/NACE No. 6, “Surface Preparation of Concrete” standard revision committee, Jenkins also offers potential compromise ahead of the committee’s upcoming meeting in April.

Continuing on, Declan Farrington, Champion Painting Specialty Services Corp., details the process behind the installation of what will total more than 1,223,000 square feet of suspended access platform as part of the ongoing deck replacement project on the Throgs Neck Bridge in New York City, and offers a glimpse of the cleaning and coating work yet to come in “Placing the Access Platform on the Throgs Neck Bridge.”

As a final installation, the January issue features JPCL’s 2022 Coatings Industry Forecast. After an up-and-down year in 2021, JPCL reached out to representatives from some of the major industrial protective coatings suppliers to gauge their outlooks on the coming year. Industry suppliers from Carboline Company, Sherwin-Williams Protective & Marine, Hempel, Tnemec Company, Inc. and Induron Protective Coatings offer business predictions, areas for positive growth and assess their goals for 2022.

In closing the issue, readers can also find the recurring Bid Bits and Paint by Numbers articles.

According to Lange, readers can expect the following topics in the February issue:

Did you know JPCL is available in multiple formats? In addition to the print edition, you can read the full January issue as a digital flipbook online, in a downloadable PDF or as individual articles on paintsquare.com.

Following the release of each issue, the magazine is added to the JPCL archives—containing 25 years of JPCL digital issues dating back to 1996—which cover a priceless collection of evergreen information, solutions to real-life problems, case studies, insight from experts and a historical record of the industry.

In 2020 alone, Technology Publishing CEO Brion Palmer reported that more than 25,000 industry professionals accessed the archives. However, the content is only available to current JPCL subscribers and, in separating from SSPC, is no longer an association benefit.