A reportedly non-toxic, fire extinguishing coating has recently been developed by researchers from the University of Southern Queensland in Toowoomba, Australia.

Inspired by one of the Earth’s hottest substances, molten lava, the hybrid coating aims to save buildings from being completely engulfed in flames. The research efforts for the development were led by USQ chemical engineer and Australian Research Council Future Fellow, Professor Pingan Song.

“Melton lava is like a viscous flowing liquid but non-flammable,” Professor Song explained. “Once cooled, it solidifies to become a ceramic layer that does not support fire.”

In making this observation about the natural substance, Song sought out to create a coating that could melt and then gradually form a flowing but non-combustible ceramic layer when exposed to extreme heat. This ceramic layer would then be able to better protect the underlying substrates, similar to a fire shield.

“Polymer foams were identified as the main cause of recent catastrophic disasters, particularly the Grenfell Tower fire,” he continued. “Solid wood materials, also widely used in buildings but extremely combustible, can also trigger fires, like the Notre-Dame de Paris blaze in 2019.” 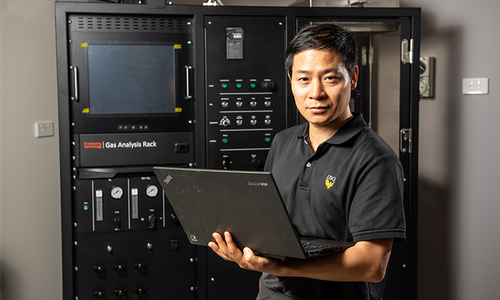 If these types of structures and select building materials were sprayed with a coating like his team developed, or thermal insulation foams, Song suggests that many of these types of tragedies could be prevented. However, most fire retardants in the market today are not effective enough, costly and sometimes are difficult to produce, USQ reports.

In an effort to mitigate the current shortcomings in the fire retardant coatings, Song and his team worked on a solution that would offer better protection and could even be used in additional application settings, such as on wooden furniture, mining, tunnels and various transportations.

“Our fire retardant coating produces a very robust and thermally stable ceramic layer, compared to existing coatings, which usually produce a protective layer that is fragile and degrades at high temperatures,” he said.

While the coating is scheduled for additional testing and refinement before it can be commercialized, Song predicts that the coating could be available within the next three years.

Song and his team’s research was financially supported by an Australian Research Council Future Fellowship and has since been published in the journal Matter.

In February 2019, researchers from the Texas A&M University were reportedly developing a new flame-retardant coating using renewable, nontoxic materials that are readily found in nature.

Department of mechanical engineering professor Jaime Grunlan led the research (partnered with researchers at KTH Royal Institute of Technology in Stockholm, Sweden, led by Lars Wagberg), which was recently published in Advanced Materials Interfaces, and said that successful development and implementation of the coating could provide better fire protection to different kinds of materials.

“These coatings offer the opportunity to reduce the flammability of the polyurethane foam used in a variety of furniture throughout most people’s homes,” Grunlan said at the time.

“The uniqueness in this current study lies in the use of two naturally occurring nanomaterials, clay nanoplatelets and cellulose nanofibrils. To the best of our knowledge, these ingredients have never been used to make a heat shielding or flame-retardant coating as a multilayer thin film deposited from water.”

Grunlan added that benefits from using the method included the coating's ability to create an oxygen barrier to plastic films and better fire protection at a lower cost than other, more toxic ingredients that are traditionally used. To test the coating, researchers applied it to a flexible polyurethane foam exposed it to fire using a butane torch to determine the level of protection the compounds provided.

Later that year, in May, researchers from the VTT Technical Researcher Center of Finland Ltd. announced that they had developed a highly fire-retardant coating from nanocellulose. The goal is for the coating to improve properties in wood-based materials.

The research used High-Consistency Enzymatic Fibrillation of Cellulose (HefCel) technology, a technique developed and patented by VTT, which enables the production of nanocellulose form wood-based pulp.

Researchers said the solids content of the HefCel material is 10x the solids content achieved with traditional manufacturing methods, which makes it well-suited for uses in which low water content is preferred (such as in paints, coatings, packaging and composites).

The idea was developed by VTT research scientists Vesa Kunnari and Jaakko Pere as part of the Design Driven Value Chains in the World of Cellulose (DWoC) project funded by Tekes (now Business Finland).

At the time of the announcement, VTT was seeking a partner to commercialize the technology.