While the ruling will no longer affect employers with 100 or more workers, the justices were reported to have allowed a requirement for health care workers at facilities that receive federal funding.

In November, the U.S. Department of Labor's Occupational Safety and Health Administration published an emergency temporary standard requiring employers with 100 or more employees to implement a COVID-19 vaccination requirement for their employees by Jan. 4.

Employers were also required to provide their employees with a weekly testing alternative to those who refuse or were unable to receive a vaccine, in addition to wearing a face covering at work in lieu of vaccination.

According to reports, the ETS required that employers include all employees across all U.S. locations, regardless of employees' vaccination status or where they perform their work, when determining where they rank on the OSHA-established threshold.

The rule also noted that part-time employees would count towards the company total, but independent contractors did not. There were other sections included in the ETS that cover other specific company situations as well, such as franchisees, multi-employer workplaces and staffing agencies.

If an employer met the OSHA threshold for the new ETS, they would also have bear the cost of providing up to four hours of paid time and reasonable paid sick leave needed to support vaccination.

However, in the event that an employee refused vaccination, the employer was not responsible for payments associated with regular COVID-19 testing or the use of face coverings. At the time of its announcement, the rule was estimated to affect some 80 million workers. 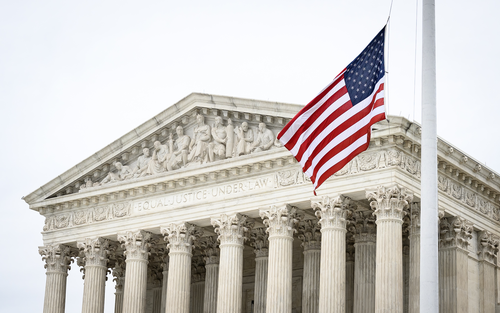 Additional reports imply that companies reaching the threshold would be largely responsible for enforcing the new rule. While there are not enough state and federal OSHA inspectors to follow-up on the vaccinations nationwide, the Administration reported that it planned to respond to employee complaints and would add coronavirus-related inspections to their to-do lists when onsite.

Employers that violated the rule could have faced fines of up to $13,653 per violation for serious violations and 10 times that for willful or repeated violations.

According to The New York Times, in the employer mandate case the Supreme Court ruled in a 6-3 vote, with the liberal justices in dissent, that the previously issued guidance requiring employees at companies with 100 or more workers be required to be vaccinated or tested weekly was nulled.

The news arrives as several sources report a surge in new COVID-19 cases driven by the highly contagious omicron variant. CBNBC reports that the U.S. is currently docking an average of 786,000 new infections per day—a pandemic record.

While debating the decision, it was noted that the unsigned majority opinion was that a statute on workplace hazards did not justify a mandate that would have required more than 80 million workers to be vaccinated against the coronavirus or to wear masks and be tested weekly. In addition, it was also stressed that the mandate hadn’t classified any distinctions based on industry or exposure risk to COVID-19.

Moving forward, if the Biden administration or OSHA is to revisit the matter, the justices added that if more tailored regulations were established, the mandate could be lawful given that “most lifeguards and linemen face the same regulations as do medics and meatpackers.”

On the opposing side of blocking the mandate, Justices Stephen G. Breyer, Sonia Sotomayor and Elena Kagan expressed that OSHA is commanded by the government to regulate safety in the workplace, but agreed that the key issue in the guidance was that of institutional competence to address the health care crisis.

“Underlying everything else in this dispute,” they wrote, “is a single, simple question: Who decides how much protection, and of what kind, American workers need from Covid-19? An agency with expertise in workplace health and safety, acting as Congress and the president authorized? Or a court, lacking any knowledge of how to safeguard workplaces, and insulated from responsibility for any damage it causes?”

In a more modest victory for President Biden, in a 5-4 vote, the Supreme Court ruled that health care employees working in facilities that received federal funding would still be required to follow the guidance requiring COVID-19 vaccinations or testing. Chief Justice John G. Roberts Jr. and Justice Brett M. Kavanaugh were reported to have joined the liberal justices to form a majority.

“All this is perhaps why health care workers and public health organizations overwhelmingly support the secretary’s rule,” the majority wrote. “Indeed, their support suggests that a vaccination requirement under these circumstances is a straightforward and predictable example of the ‘health and safety’ regulations that Congress has authorized the secretary to impose.”

In opposition of the mandate for health care workers in facilities where money is received for Medicare and Medicaid programs, Justice Clarence Thomas, joined by Justices Samuel A. Alito Jr., Neil M. Gorsuch and Amy Coney Barrett, wrote that “scattered provisions” in the statute did not justify the mandate.

Like the former opposition regarding larger employers, the justices expressed that without clear congressional authorization, the federal government should not be allowed to force health care workers to choose between getting a vaccine or their livelihood.

In response to the court’s rulings, President Biden reported that although he was disappointed, the vaccine requirement for health care workers would save the lives of patients, doctors and nurses, and that the mandate would be enforced.

Looking to current numbers of vaccinations in the country, the U.S. Centers for Disease Control and Prevention says only 63% of the nation is fully vaccinated and of that group, only 37% have received a booster shot.

In prior guidance issued by President Biden, federal contractors and subcontractors were required to be fully vaccinated against COVID-19 by Dec. 8, 2021. The deadline was later extended to extended to Jan. 18.

The guidance went on to report that it would also apply to “subcontractors at all tiers, except for subcontracts solely for the provision of products,” in addition to all workplace locations as well as individuals on remote work or who work outside.

A full copy of the new guidance can be viewed here.

The filing includes a motion for a temporary restraining order and sworn statements from several contractors detailing how the federal contractor mandate is hurting their businesses. Also cited in the filing, AGC pointed out that data by construction health and safety research organization CPWR revealed that for the week beginning Oct. 24, only 52.5% of respondents who identified as construction workers reported they had been vaccinated, compared to 80.7% of all other occupations.

The figure has reportedly been consistent for construction workers since May 2021.

On the same day the new guidance was issued in the fall, Ben Brubeck, Vice President of Regulatory, Labor and State Affairs of the Associated Builders and Contractors, released a statement conveying that while the ABC continued to encourage getting vaccinated, it was planning to review the guidance carefully with industry stakeholders to understand its full impact and unintended consequences.

Brubeck went on to note that the based on the association’s initial reading, that the guidance would result in additional compliance burdens, exacerbate the construction industry’s skilled workforce shortage and increase costs for federal contractors and taxpayers.

Looking ahead, Brubeck reported that ABC would be participating in the Federal Acquisition Regulatory Council’s rulemaking process for the rule and would also be fully engaged in the forthcoming OSHA ETS rule applying to all employers with 100 or more employees.

In taking additional measures, ABC was also reported to have sent a letter to OMB and the Task Force on behalf of its federal contractor members with practical feedback on the EO.