Over $1B in DIA Contract Changes Approved

The four resolutions to amend contracts regarding the project were approved in a 10-3 city council vote and will allow for six additional years of construction.

“The failure of the (earlier partnership deal) left it a mess,” said Councilman Kevin Flynn prior to voting. “A ‘no’ vote on this contract is a vote to keep it a mess, and I believe we can’t do that. I regret that we have to undertake it in the way we have … (but) it simply has to be completed.”

According to The Denver Post, the additional $1.3 billion in project spending has ballooned the Great Hall project cost to as much as $2.1 billion. Over the course of construction, crews plan to update the nearly three-decade-old terminal building, address security vulnerabilities in the checkpoints and increase passenger-processing capacity.

Other changes include refurbished baggage claims, added and renovated restrooms, changes to curbside setups outside and, on Level 5, replacement of the current security-screening spaces with public plazas and meeting areas for arriving passengers. 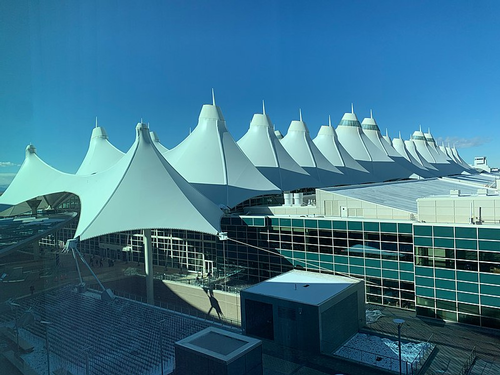 As a result of the new additional funding, travelers passing under the DIA’s signature tented roof can expect to see continued construction through 2027 or mid-2028. However, the remaining construction efforts are expected to be out of the way, as most changes being made to central portions of the airport have already been completed.

Specifically, the resolutions amend the following contracts with the City and County of Denver regarding the airport’s big renovation project:

“It is essential that we finish the full build-out of the terminal now so we can prepare DEN for the future,” said new airport CEO Phil Washington, following the council’s approval. “By investing in our airport, we will generate more flights, more local jobs, increased revenue for the region, and more economic impact for our region.”

The DIA reports that it will be paying for the project through a combination of existing and future revenue streams, in addition to federal funding.

A couple months later, in January 2018, two subsidiaries of Hochtief, a Germany-based construction company, were announced as the companies to oversee the expansion. The companies, Turner Construction and Flatiron Construction, would be building two new hubs for the airport, with the capacity for three more, as well as 16 new gates and installing additional pavement.

The agreement, which was dated March 13, details more than $55 million in promised final payments on top of the $128.2 million previously reported.

In May of this year, contract amendments were requested and included:

In November, the DIA announced that construction on Phase 1 of the project had reached competition. The now-$770 million terminal renovation project was originally slated to reach completion in 2021. However, what’s more is the phase was able to be completed under budget. (In July, Phase 1 was reported to be about $25 million under budget.)

The milestone arrived just in time, as The Denver Post reported that the airport had started to recover from the COIVD-19 pandemic and recently ranked as the third-busiest airport in the world.

Renovation updates to the space include new ticketing areas for Southwest, United and Frontier airlines in the Jeppesen Terminal’s midsection, on both the east and west sides of Level 6. Construction crews were also reported to have extended the upper level’s floor plates farther into the tented atrium, making room for multi-sided check-in spaces and larger arrays of ticketing kiosks.

Over the course of the next few weeks, crews are slated to remove most of the remaining construction walls on levels five and six within the terminal.

Southwest and United airlines began using the renovated spaces and its new self-serve bag-drops at the beginning of the month. Frontier is expected to take over some of these new stations in the coming months.

In July, a groundbreaking was hosted for Phase 2 of the DIA’s Great Hall Project, which was slated to focus on building a new security checkpoint.

The plan estimates that all work for Phase 2 will be done by mid-2024 (despite the plan also scheduling the checkpoint itself to be open in early 2024).

Phase 2 work will take place simultaneously with the completion of Phase 1 as crews finish the work on the new ticketing areas for United and Southwest Airlines. The scaled-down, $170 million plan for Phase 2 was released in December 2020 with officials noting that Hensel would also take point for this work.

While the second phase no longer involves the relocation of a second, parallel security checkpoint, it does still plan to expand the floor on level six in the atrium’s northwest corner to make room for a new, larger security checkpoint that will replace the existing south checkpoint downstairs.

Although this decision was made during budget cuts to the project earlier this year, DIA officials said that in the spring they plan to finish out security after all—in a project addition that would add significant new costs. However, in order to undertake a third phase on the project, the DIA will first need to gain approval from City Council.